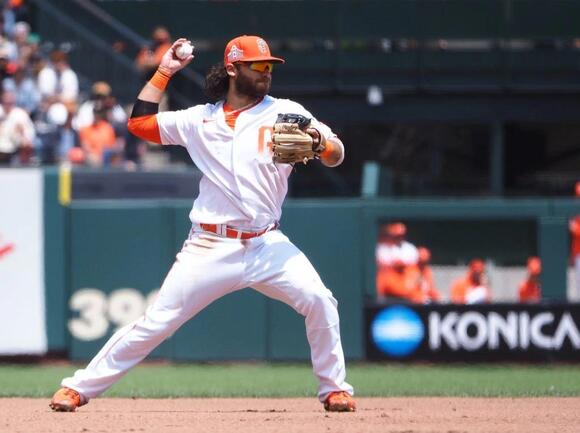 Right-hander Kevin Gausman pitched like an All-Star and Curt Casali provided added a three-run home run Sunday afternoon, sending the host San Francisco Giants to a three-game sweep of the Washington Nationals with a 3-1 victory.

The National League West-leading Giants finished the first half at 57-32, giving them the most wins in the majors and the highest winning percentage (.640).

The 57 wins equals the third-most in franchise history at the All-Star break, trailing only the 59 wins in 1993.

Selected to the NL All-Star team, the first-year Giants pitcher will not participate in Tuesday’s All-Star Game on short rest, but remains on schedule to open the club’s second half Friday at St. Louis.

Gausman pitched with a lead most of the way as the result of Casali’s home run in the second inning. All-Star Brandon Crawford led off the second with a single and one out later, advanced a base on an infield hit by Steven Duggar.

Casali, who had no home runs in his first 29 games for the Giants, then belted his fourth homer in his last 12 outings, a 420-foot blast to center field off Nationals right-hander Erick Fedde (4-6). 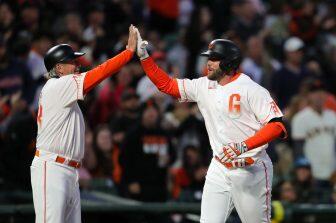 They were the only runs the Giants got off Fedde, who worked five innings and allowed eight hits and three walks. He struck out seven.

The Nationals got back within 3-1 on a bases-loaded fielder’s-choice grounder out by Josh Harrison in the seventh. Right-hander Dominic Leone ended the threat, getting Ryan Zimmerman to fly out to shallow center field before striking out Victor Robles.

Set-up man Tyler Rogers threw a 1-2-3 eighth for his 17th hold before closer Jake McGee worked around a two-out double by Starlin Castro in a scoreless ninth for his 19th save.

Crawford went 3-for-4 and Mike Yastrzemski added two hits for the Giants, who won their fourth consecutive game.

Castro collected three of Washington’s five hits in the loss.

Giants -1.5 Total: 10.5 Over (-106) | Under (-114) San Francisco Giants vs. Chicago Cubs Prediction and Picks. Expect a higher-scoring affair with the wind forecast to blow out toward center field at 13 MPH at game time. The Giants’ offense should help Gausman with their top 10 batting average and OBP securing a win.
MLB・13 DAYS AGO
nbcsportsedge.com

The App is Back! Don’t forget to download the NBC Sports EDGE app to receive real-time player news, mobile alerts and track your favorite players. Plus, now you can check out articles and player cards. Kevin Gausman O/U 6.5 Strikeouts vs. Cubs. One of the best road pitchers in all...
MLB・13 DAYS AGO
New York Post

Former Cub Kris Bryant returned to Wrigley on Friday and got a long standing ovation before his Giants clubbed the Cubs, 6-1. The pitching matchup Saturday indicates a similar outcome is in store, but do we risk playing the prohibitive favorite?. With the White Sox expected to make a deep...
MLB・13 DAYS AGO
KGO

SAN FRANCISCO -- Kevin Gausman heard the boos when he stepped into the batter's box, realizing right away the fans had no idea the Giants were down to their last options with no position players left. So the pinch-hitting pitcher stood in and delivered, lofting a full-count, bases-loaded sacrifice fly...
MLB・7 DAYS AGO

The 2021 Giants continue to amaze. Friday was more of the same in the bonkers department from the best team in baseball. First there was Donovan Solano’s game-tying solo home run in the ninth with one strike remaining, a blast that sent the game to extras just a half inning after a three-run shot from the Braves gave them the lead.
MLB・7 DAYS AGO
giants365.com

Kevin Gausman has had a lot of media focus all season, from making the All-Star team for the first time to having to handle family medical problems. Through it all, the Giants starter remained accommodating and professional with the press. Because of his accessibility, his friendliness and his quotability both in Zoom interviews and in person, Gausman was presented with the 2021 Bill Rigney Good Guy Award before Friday's game against the Braves at Oracle Park, and he accepted with his usual frie...
BASEBALL・7 DAYS AGO
Sportsnaut

If this matchup had come just a few short weeks ago, the San Francisco Giants would have been feeling good about their chances to head into Chicago and sweep the Cubs. Now, the Cubs are playing top-notch baseball, and this series looks like it could end up being competitive. How...
MLB・14 DAYS AGO
Sportsnaut

SAN FRANCISCO (AP) — The San Francisco Giants become first MLB team to clinch a playoff berth this season with 9-1 win over San Diego Padres. Copyright 2021 The Associated Press. All rights reserved. This material may not be published, broadcast, rewritten or redistributed without permission.
MLB・11 DAYS AGO

Wilmer Flores went 3-for-3 with a home run and three RBIs Sunday afternoon, and the San Francisco Giants held on
MLB・12 DAYS AGO
giants365.com

The San Francisco Giants clinched their first postseason berth since 2016 on Monday night, using a five-run first inning against
MLB・10 DAYS AGO
prosportsoutlook.com

The San Francisco Giants don’t just have the best record in the best division, or find themselves at the top of the National League. They have the most Wins of any team in all of baseball this season, despite having the t-24th worst preseason odds entering the season. They’ve been the most surprising story in the game this year and continue to come through with unexpected wins thanks to a variety of players, not just one or two superstars.
MLB・7 DAYS AGO
FOX Sports

The MLB postseason is beginning to take shape. With the exception of the NL East, most of the divisions appear well on their way to being wrapped up, but the wild-card races are as intense as ever coming down the stretch. Let’s take a look at the updated power rankings....
MLB・4 DAYS AGO