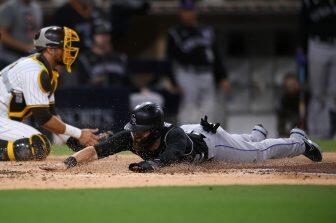 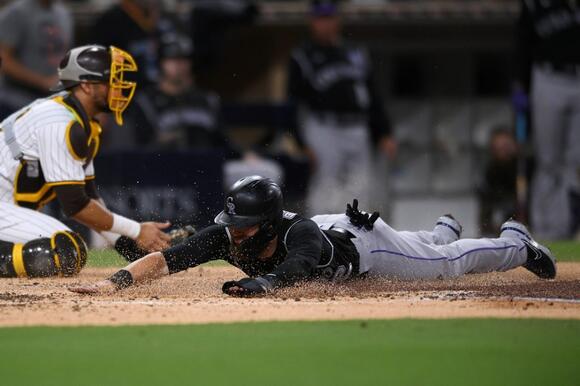 Miguel Diaz and three other San Diego relievers held visiting the Colorado Rockies scoreless on one hit over the final 5 1/3 innings Friday night as the Padres scored a 4-2 victory.

Wil Myers capped a two-run sixth with a tiebreaking double that put the Padres on top for good in the opener of a three-game series.

Rockies starter Kyle Freeland (1-3) was protecting a 2-1 lead when Jake Cronenworth opened the sixth with a single. Cronenworth moved to third on a double by Manny Machado. Freeland was then forced out of the game with a blister on the middle finger of his pitching hand.

Trent Grisham greeted reliever Tyler Kinley with a groundout to the right side that got Cronenworth home with the tying run. Myers then lined a two-out double to left center.

The Padres added a run in the seventh when Tommy Pham singled with one out, moved to second on a passed ball and scored on Machado’s two-out single.

Diaz (3-1) allowed one hit and no walks while striking out three in 2 2/3 scoreless innings in relief of emergency starter Reiss Knehr. Mark Melancon picked up his major-league-leading 27th save with a 1-2-3 ninth inning.

Earlier Friday, the Padres promoted Knehr from Double-A San Antonio to make his major league debut after placing scheduled starter Blake Snell on the injured list due to a stomach issue. Knehr gave up two runs on three hits and four walks with three strikeouts in 3 2/3 innings. 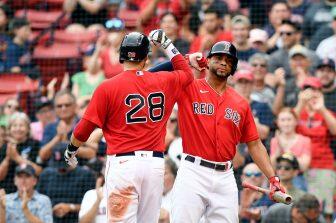 Trevor Story doubled to lead off the second and Knehr walked the next three Rockies to force in the game’s first run.

Colorado’s Chris Owings drew a walk with two outs in the fourth and scored on Freeland’s double off the glove of left fielder Tommy Pham.

The Padres scored their first run off Freeland in the bottom of the fourth. Cronenworth opened the inning with his 20th double of the season and scored on a one-out Grisham single.

Rockies slug their way to series victory over Phillies

The Colorado Rockies’ biggest problem away from Coors Field this season has been a lack of power. They’re slugging a National League-worst .344 on the road and have the second-fewest home runs. But no one would know any of that based on watching the Rockies take three of four from the Philadelphia Phillies at Citizens Bank Ballpark over the weekend.
MLB・7 DAYS AGO
The Spun

San Diego Padres stars Fernando Tatis Jr. and Manny Machado had to be separated inside of the dugout on Saturday night. Tensions are high within the San Diego franchise right now, as the Padres are hoping to make a final push for a playoff spot. The Padres are currently 1.5 games behind the Cardinals for the second Wild Card spot.
MLB・2 DAYS AGO
Sportsnaut

The St. Louis Cardinals welcome the San Diego Padres to town this weekend for a three-game set with massive playoff implications. The St. Louis Cardinals might have their most pivotal series of the entire season this week. Having just taken the lead the wild card race, they welcome the San Diego Padres for three games this weekend in what could ultimately determine their postseason fate.
MLB・4 DAYS AGO

DENVER — Ozzie Albies homered on the first pitch of Ryan Feltner's major league debut, and the Atlanta Braves added three more home runs in a 9-2 win over the Colorado Rockies on Sunday. Support local journalism reporting on your community. * New Subscribers Only. * Digital Subscription Only. After...
BASEBALL・14 DAYS AGO
chatsports.com

Entering play on Tuesday, the San Diego Padres held a one-game lead over the Cincinnati Reds in the chase for the final National League Wild Card spot. Can the Padres hang on to that lead with a brutal schedule for the rest of September and October?. Here’s why the San...
MLB・13 DAYS AGO
madfriars.com

The Giants hold a one-game lead over the Dodgers in a tight NL West race. With a second straight win against the Rockies on Tuesday, San Francisco could stay a step ahead of Los Angeles. How to Watch:. Date: Sept. 7, 2021. Time: 8:40 p.m. ET. TV Channel: NBC Sports...
MLB・13 DAYS AGO

Jo Adell ended a no-hit bid by Blake Snell with a two-run single in the seventh inning, and the visiting
MLB・12 DAYS AGO
Atlantic City Press

PHILADELPHIA — When the Phillies decided last week to stop using a conventional No. 5 starter in favor of Johnny Bullpen, President of Baseball Operations Dave Dombrowski defended the move by noting that "three of the best teams in baseball do it all the time." Somehow, though, it works much...
MLB・9 DAYS AGO
vavel.com

Stay tuned for a thrilling rivalry matchup between the Los Angeles Angels, who remain in contention for the wild card.Do not miss a detail of the match Dodgers vs Padres live updates and commentaries of VAVEL. 1:30 AM15 hours ago. How to watch Dodgers vs Padres Live Stream on TV...
MLB・10 DAYS AGO
Sportsnaut

SAN FRANCISCO (AP) — The San Francisco Giants become first MLB team to clinch a playoff berth this season with 9-1 win over San Diego Padres. Copyright 2021 The Associated Press. All rights reserved. This material may not be published, broadcast, rewritten or redistributed without permission.
MLB・6 DAYS AGO
Sportsnaut