'Karen' Demands That Kids' Tree House Be Destroyed, Their Dad's Response Is Brilliant

When this father received a complaint about the treehouse he had built with his sons, he was devastated. They tore down the special project, but the father made sure to respond with a clever letter for everyone to see.

A father spent hours assembling a tree fort with his sons, their efforts came tumbling down. This was required after an unidentified individual, referred to as "Karen," complained about their structure.

This forced the family to bid farewell to the treehouse. However, the dad was not happy to leave things there, so he left a note for "Karen" to prove how trivial the complaint was.

THE REASON FOR THE TREEHOUSE

The family decided to erect their little tree fort in 2020 to pass some time. They had been spending many hours indoors, and this outdoorsy project would get them in touch with nature again.

They were excited to have fun in their little home in the trees, but sadly, this joy was short-lived. "Karen" swiftly decided to raise a red flag and reported them to the homeowners association. These actions ultimately ruined their ideal garden haven. 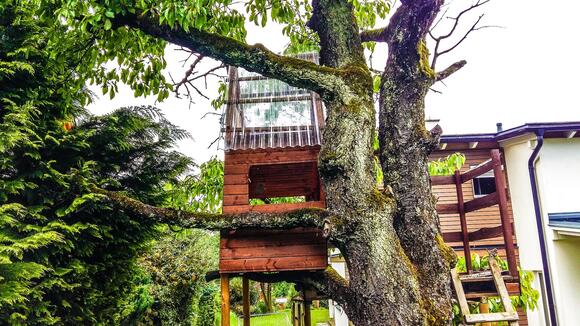 The father was disappointed to see his children's treehouse come down. So he made sure to express his thoughts in a letter which has since gone viral.

He conveyed that the irritation "Karen" had with the treehouse was completely unwarranted. In the letter, he sarcastically stated: “Don’t worry, you’re safe now! Your act of casual cruelty was successful."

The letter also alluded to the consequences caused by this busy-body neighbor. The kids were now forced to spend their time watching television and ultimately miss out on the beauty of a childhood in the mud and leaves outside.

Reddit users sided with this dad and were quick to condemn "Karen's" actions. One user also encouraged this father to oppose the fickle complaint. They said: "Dave, Fight back. Don’t let the Karen win ... Don’t let the children down." 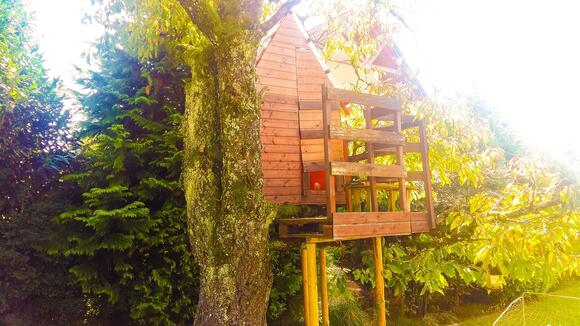 Many of the users also shared their own terrible experiences with the homeowners association. The consensus was that they often enforce completely unnecessary rules.

It turns out that complaints occur between neighbors regardless of whether there is a homeowners association or not. Leona Palmer, a mum-of-three living in Burbage, Leicestershire, received a letter for noise complaints from the people living next door. 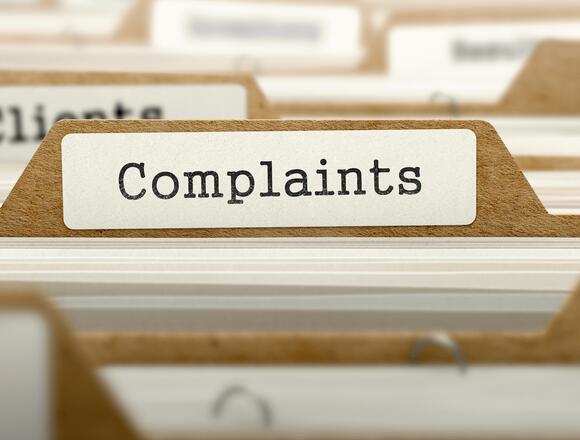 The letter condemned Palmer's family for their "unbearable" noise levels during a party in April 2020. The party in question was for her triplet sons' eighth birthday. Regardless of inviting only a handful of guests, Palmer's neighbors were furious.

In their typed letter were various accusatory statements. One line stated:

"Whilst we appreciate children can often get excited and might at times be noisy, but it is the constant shouting and screaming that we cannot endure any longer." 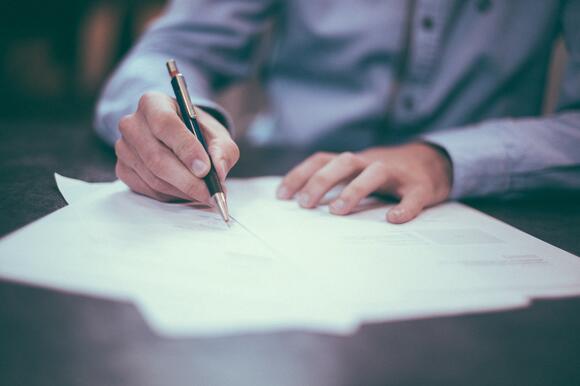 Palmer was shocked by these claims. This was the first complaint her family had received since they moved into the neighborhood three years prior. Since receiving the attacking letter, no further action has been taken.

Perhaps Palmer will respond similarly to the witty father who sent out his own letter to defend his kids and their treehouse! Regardless, communities would be friendlier places if people remembered what it once meant to be "neighborly."

Some people! Wishing for their Karma! I have noisy grandsons, I get out there with them and make some noise! Have fun kids and pray you don’t grow up to be grouchy!

HOA's are worthless and more often than not create problems instead of solving anything. It also gives the "Karens" a platform.

A girl was stuck in the elevator and kept calling for help. Several apartment residents heard her, but no one offered help to the poor soul. “Hello, can anyone hear me? I’m stuck here,” little Evelyn cried. She was on her way back from the pharmacy after buying medicines for her mother when she got stuck in the elevator.
PUBLIC SAFETY・4 DAYS AGO
Parents Magazine

How to Make a Family Tree With Kids

Family trees help children learn about their ancestry and identity. Here’s how to make one yourself—plus a simple family tree template you can download at home. A family tree is a genealogical chart documenting a person's ancestry. The diagram represents generations of family members and their relationships to one another. Making a family tree has several benefits for kids—for example, it can help them build a core identity, develop an interest in history, and bond with relatives.
FAMILY RELATIONSHIPS・10 DAYS AGO
Amomama

Reddit user MammaBearit33 discovered that her husband bathed their son in the sink and then called him gross before she completely banned him from bathing their child. Recently, a Reddit user named MammaBearit33 shared a post about the time her husband tried to bathe their son in the sink. The unsuspecting walked in and immediately stopped him because she thought it was "weird."
FAMILY RELATIONSHIPS・2 DAYS AGO
Daily Mirror

A couple gave their wedding guests an excuse to brush up on their maths after devising a table plan that was full of equations. In order to find out where they would be sitting for the wedding breakfast, guests had to solve the maths challenge next to their name. The...
RELATIONSHIP ADVICE・3 DAYS AGO

At his wedding, a groom’s autistic brother delivered a funny yet tear-jerking speech praising his brother, whom he called a “hero.”. Weddings are some of the most intimate and special occasions that bring families together, but also, it is the time when things get more emotional than usual. Jonah Waldron...
FAMILY RELATIONSHIPS・1 DAY AGO
Amomama

Teenagers love their privacy, but some parents are reluctant to give it to them. One Redditor started a debate on the platform when he and his wife refused to let their son install a lock on his bedroom door. A father on Reddit came home one day and found out...
FAMILY RELATIONSHIPS・1 DAY AGO
Amomama

Stella’s mother-in-law, Mrs. Anna Perkins, didn’t want her disabled father to attend her wedding because everyone would see his hand. She didn’t defend him at first, but then, Mrs. Perkins went too far. “I’m so sorry, Dad. But I don’t think you can attend the wedding. My mother-in-law is so...
FAMILY RELATIONSHIPS・9 HOURS AGO
Amomama

Woman Gives Family An Ultimatum After They Insulted Her Fiance

A woman on Reddit got into a heated argument with her relatives after her mother humiliated her fiance during a family dinner. The woman then told them they weren't going to attend her wedding until they apologized. A Redditors family made a habit of making fun of her husband whenever...
FAMILY RELATIONSHIPS・17 HOURS AGO

A woman who cannot have kids asked netizens if she was entitled to overreact when her mother-in-law behaved offensively. She excluded her from their family photo album because she cannot and does not have kids. A woman shared her reason for calling her mother-in-law cruel recently. She told netizens that...
FAMILY RELATIONSHIPS・10 HOURS AGO
Amomama

A woman in her early thirties turned to Reddit, voicing her concerns about how her brother wants her to make an exception for his rainbow baby at her adult-only wedding event. Some of the most memorable moments of our life can turn awry because of family conflicts, and this 33-year-old female experienced the same feeling. To vent out, she posted her story in Reddit's popular AITA forum, hoping to get some clarity.
RELATIONSHIP ADVICE・7 HOURS AGO
Amomama

A father laid down some ground rules for his son when he returned home after graduating from college. According to him, his 23-year-old son refused to act like a responsible adult and freeloaded off of his parents. Parents have their own ways of making things work in the house, and...
RELATIONSHIP ADVICE・1 HOUR AGO
People

"She was vaccinated but was infected by others who chose not to be. The cost was her life," Candace Cay Ayers' family wrote in her obituary. The family of a 66-year-old woman who died of a breakthrough COVID-19 infection included a powerful message in her obituary for people who have chosen not to get the vaccine.
FAMILY RELATIONSHIPS・7 DAYS AGO
Amomama

The Osmonds are known for being a talented family in the music industry. However, Donny revealed that if his parents had listened to advice early on in their life, they wouldn't have been born. Donny Osmond once had an interview with Chet Cooper and Dr. Gillian Friedman about growing up...
FAMILY RELATIONSHIPS・2 DAYS AGO
The US Sun

A SON has defended his mother's decision to carve the word "adulterer" into his cheating father's gravestone. Posting the shock move to Reddit, the unnamed man explained his reasoning behind supporting his mum's vengeful decision. "My father and mother had a very bitter marriage towards the end of his life,...
RELATIONSHIP ADVICE・1 DAY AGO
Amomama

No Lulling: The Mistake Every Mom Makes with Their Sleeping Baby

Newborn babies have strange sleeping habits, but one mother's recent video showed that she misunderstood nap time for many years. She is on her fourth child and has only now learned a very helpful tip. Babies can cause many mothers and fathers to lose hours of sleep. For years, Chrissy...
RELATIONSHIPS・2 DAYS AGO