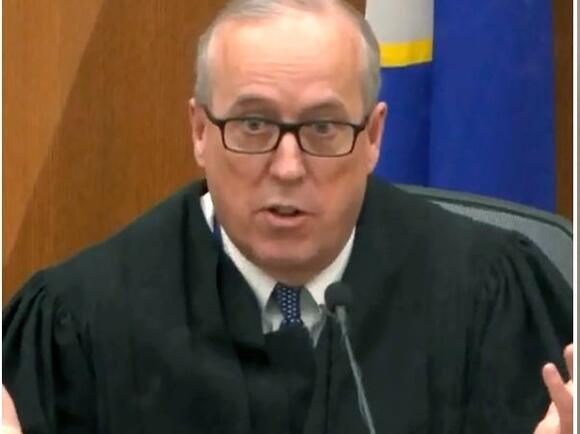 Minnesota's attorney general sent a letter Wednesday to the judge who presided over the Derek Chauvin trial, asking that he "correct the record" around the responsibility of the children at the scene of George Floyd's murder.

Attorney General Keith Ellison wrote that he wasn't asking to change Chauvin's 22.5 year sentence, but rather that the judge edit a sentencing memo where he suggests that the four juveniles who witnessed Floyd's death were free to leave the scene. Three girls who witnessed the murder were 17 at the time, and another girl was 9.

"Children lack the adult capacity for decision-making, including the ability to maturely 'walk away.' Moreover, the law does not place the burden on a child to choose between staying-whether to stand witness or in an attempt to aid a victim-or leaving the scene of a crime," Ellison wrote in the letter to Hennepin County Judge Peter Cahill. "For good reason: The responsibility of shielding a child from witnessing a crime should not fall on the child."

Prosecutors had argued that Chauvin should receive a sentence above and beyond the standard guidelines due to aggravating factors, including that he killed Floyd while children were in the area. Cahill ultimately found there were aggregating factors that warranted an upward departure in the usual 12.5-year sentence for a first-time offender like Chauvin, but he ruled the four girls' presence at the scene wasn't one of them.

Cahill wrote last month in the sentencing memo that the four girls had walked over after officers subdued Floyd and weren't present when they were struggling to get him into a police cruiser.

The judge wrote that there was no evidence the four girls - including Darnella Frazier, the teenager who recorded Floyd's killing - were traumatized by the event.

"Mr. Chauvin is correct in saying that these young women were free to leave the scene as they wished, were never coerced or forced by him or any of the other officers to remain a captive presence at the scene, and did not know any of the officers or Mr. Floyd, and that this weighs against this factor as the basis for an aggregated departure," Cahill wrote.

Ellison disagreed with the court that there was no evidence the girls had been traumatized by what they saw, pointing to Frazier's testimony that she stays up at night apologizing to Floyd for not doing more to save his life.

Ellison added that the state is "deeply worried" the court is sending a message that suggests children shouldn't intervene to stop a crime, but instead "simply walk away and ignore their moral compasses."

He argued the court also shouldn't have pointed out in the sentencing memo that the girls "giggled" at certain points during the incident.

"But that observation is completely immaterial: Children process traumatic experiences in ways that may seem unusual to the untrained eye," Ellison wrote.

The attorney general noted that research suggests "adults view Black girls as less innocent and more adult-like than their white peers," and this practice of "adultification" can lead to observers discounting a young Black girl's trauma. The letter was supplemented with a report from a Triple Board-Certified Child & Adolescent, Adult and Forensic Psychiatrist.

Editing the memo would not affect Chauvin's sentence, Ellison wrote in the letter, "but will avoid the risk of sending the message that the pain these young women have endured is not real or does not matter, or worse, that it is a product of their own decisions and not a consequence of Defendant's."

A man told Inside Edition that he used a fleet of bulletproof SUVs to prevent assassination attempts against Chauvin. The group that hired him said that's not true.
MINNESOTA STATE・1 DAY AGO
BET

Three former Minneapolis police officers charged in George Floyd’s death are asking a judge to reconsider allowing cameras in the courtroom. On Thursday (September 2), attorneys for Thomas Lane, J. Alexander Kueng and Tou Thao argued against permitting cameras during the trial, claiming witnesses say they won’t testify if the trial is televised or live-streamed. WCCO reports the defendants also believe the cameras will prevent a fair trial.
LAW・13 DAYS AGO
Minneapolis Star Tribune

A judge presiding over the cases against three former Minneapolis police officers charged in George Floyd's death did not immediately rule on their request to prohibit livestreaming their joint trials next year. The issue arose during a hearing Thursday that touched on several issues: accusations that the county medical examiner...
MINNEAPOLIS, MN・14 DAYS AGO

Minnesota State Patrol officers purged their texts and emails after they were sued over their response to George Floyd protests, according to witnesses

Witness testimony on July 28, 2021, revealed that troopers knew a lawsuit had been filed before deleting relevant emails and text messages.
MINNESOTA STATE・11 DAYS AGO
fox9.com

Attorneys for the former officers changed their mind about logistics for the trial.
PUBLIC SAFETY・14 DAYS AGO
WFTV Channel 9 Orlando

Four former Minneapolis police officers accused of violating George Floyd’s constitutional rights while detaining the 46-year-old in May 2020 pleaded not guilty Tuesday. A grand jury indicted Derek Chauvin, Tou Thao, J. Alexander Kueng and Thomas Kiernan Lane on charges of deprivation of rights under color of law in May. The law forbids officials from “willfully depriving a person of a right or privilege protected by the Constitution or laws of the United States” while acting in an official government capacity.
LAW ENFORCEMENT・3 DAYS AGO

MINNEAPOLIS (AP) — Minnesota Supreme Court OKs ballot question on future of Minneapolis Police Department in wake of George Floyd’s death. Copyright © 2021 The Associated Press. All rights reserved. This material may not be published, broadcast, written or redistributed.
MINNEAPOLIS, MN・17 HOURS AGO
Bring Me The News

A former US police officer convicted of murder in the death of George Floyd has pleaded not guilty to allegedly violating the civil rights of a teenager in a separate case that involved a restraint similar to the one used on Mr Floyd. Derek Chauvin was convicted earlier this year...
PUBLIC SAFETY・1 DAY AGO
INFORUM

FARGO — A well known activist and an original founder of the racial justice group OneFargo died Thursday, Sept. 9, according to OneFargo members. Family and friends are waiting for the results of an autopsy to determine what caused the death of 23-year-old Anyiwei Maciek. When asked about Maciek's death,...
FARGO, ND・6 DAYS AGO

KANSAS CITY, MI – Jean Peters Baker, prosecutor of Jackson County, MI, submitted a motion on Aug. 28 to overturn the conviction of Kevin Strickland, citing “clear and convincing evidence of Strickland’s actual innocence.”. Despite that, Strickland is still in prison because the Missouri Attorney General asked the court for...
MISSOURI STATE・10 DAYS AGO
CBS Minnesota

ST. PAUL, Minn. (WCCO/AP) — The Minnesota Supreme Court has ruled that unanimous votes are required for the state Board of Pardons to grant clemency. Justices overruled a lower court that had declared the 124-year-old standard to be unconstitutional. The order means that the three board members all must agree to grant a pardon. Amreya Shefa sued after she was denied a pardon in 2020 on a 2-1 vote in the killing of her husband, whom she accused of repeated sexual abuse. Her attorney says she’s likely to be deported to Ethiopia, where she fears her husband’s relatives will kill her. Gov. Tim...
MINNEAPOLIS, MN・19 HOURS AGO
Insider

Fiancé of Gabby Petito breaks silence on her mysterious disappearance

An attorney for Brian Laundrie, Gabby Petito's fiancé, said it was "an extremely difficult time for both the Petito family and the Laundrie family."
PUBLIC SAFETY・2 DAYS AGO
Daily Fort Worth

Some people simply can’t control themselves and are risking decades in prison for their reckless actions and this man is just that kind of person because he is about to spend major part of his life in prison after he shot to death one person and injured another because they were Joe Biden supporters.
U.S. POLITICS・2 DAYS AGO

Brian Laundrie is still not co-operating with a police investigation after he returned home from their trip without the 22-year-old earlier this month.
PUBLIC SAFETY・7 HOURS AGO
leedaily.com

Maryland Judge Shot Himself Before Getting Arrested! Read Full News

As federal authorities prepared to arrest him, an Eastern Shore Maryland judge who had been on suspension for more than a month due to a probe into unlawful photos of minors took his own life. According to the U.S. Department of Justice, Caroline County Circuit Court Judge Jonathan G Newell died of a self-inflicted gunshot wound early Friday morning.
MARYLAND STATE・3 DAYS AGO
Vanity Fair

Despite spending her entire Senate confirmation hearing claiming she couldn’t possibly express an opinion on literally anything, Amy Coney Barrett’s views on abortion are all too chillingly clear. As we learned last fall, as Mitch McConnell fast-tracked her appointment to the Supreme Court, the devout Catholic signed a letter calling for the end of the “barbaric” Roe v. Wade; wrote in a court opinion that abortion is “always immoral”; joined dissenters in Box v. Planned Parenthood of Indiana and Kentucky Inc., arguing in favor of an Indiana law that would have required doctors to notify the parents of a minor seeking the medical procedure; and dissented in the case of Commissioner of the Indiana State Department of Health v. Planned Parenthood of Indiana and Kentucky Inc., arguing in favor of a law that would have required that fetal remains be buried or cremated. Perhaps most disturbingly, she refused to answer a follow-up question from Senator Sheldon Whitehouse, who asked, “Under an originalist theory of interpretation, would there be any constitutional problem with a state making abortion a capital crime, thus subjecting women who get abortions to the death penalty?” Instead, she claimed it would not be “appropriate...to offer an opinion on abstract legal issues or hypotheticals,” meaning that yes, she sees a scenario in which the state could sentence a woman to death for getting an abortion.
TEXAS STATE・3 DAYS AGO