London fintech funding soars in first half of the year 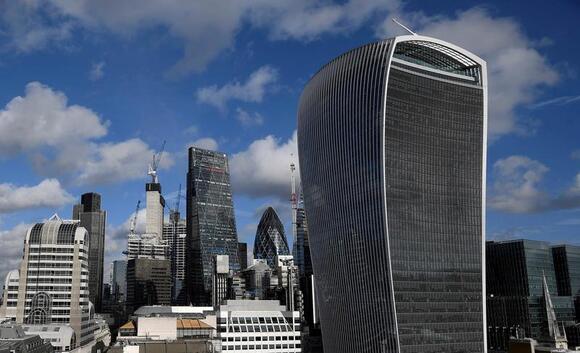 LONDON (Reuters) - Fintech companies based in London raised more funding from venture capital investors in the first six months of 2021 than in any other year, demonstrating the British capital’s resilience as a hub for digital financial services post-Brexit.

Investors poured $5.3 billion into London fintech startups in the first half of the year, compared to $2.1 billion in the same period in 2020, new research from Dealroom and agency London & Partners found.

London fintechs accounted for a large share of Europe’s growth, representing over a third of the region’s funding.

Globally, the city of London ranks second behind San Francisco and slightly ahead of New York, the research found.

Local entrepreneurs and investors said the figures showed the British capital could remain a leading fintech hub even after the country’s exit from the European Union and the economic damage caused by the COVID-19 pandemic.

“Today’s investment figures are a vote of confidence for the UK fintech sector,” Anne Boden, CEO of neobank Starling, said.

Despite the growth, concerns remain about the impact of Brexit, particularly around access to talent and licences.

“The loss of passporting after Brexit means that licensing and international expansion is no longer easiest in London,” said Charles Delingpole, CEO of startup ComplyAdvantage. “London therefore has to move to a higher value added model focused on a global rather than European hub role.”

The new research emerges after a successful markets debut for Wise, one of London’s best known financial technology companies.

Wise shares opened at 800 pence on its London Stock Exchange debut on Wednesday, giving a market capitalisation of 7.95 billion pounds, well above market expectations from earlier this year.

OSLO, Aug 17 (Reuters) - Norway's sovereign wealth fund, the world's largest, made a record loss of 1.68 trillion Norwegian crowns ($174 billion) in the first half of 2022 as stocks and bonds were hit by global recession fears and rampant price inflation.
FINANCIAL REPORTS・3 HOURS AGO
Reuters

BANGKOK (Reuters) - Investment applications in Thailand dropped by 42% in the first half of 2022 compared to the same period last year, official data showed on Wednesday, led by a sharp fall in foreign projects as the global economy slowed.
ECONOMY・1 HOUR AGO
Reuters

China pares back holdings of U.S. Treasuries for 7th month

BEIJING, Aug 15 (Reuters) - Chinese developers in "survival mode" sharply cut property investment in July while new construction starts suffered their biggest fall in nearly a decade, suggesting the liquidity-challenged sector is not about to turn the corner anytime soon.
REAL ESTATE・2 DAYS AGO

Aug 17 (Reuters) - World shares struggled and oil prices fell on Wednesday as the UK's highest inflation since 1982 and a rate hike in New Zealand reminded investors of the challenges facing the global economy.
BUSINESS・21 MINUTES AGO
Reuters

Aug 16 (Reuters) - Britain said on Tuesday that Russia's Black Sea Fleet is currently struggling to exercise effective sea control, with patrols generally limited to the waters within sight of the Crimean coast.
POLITICS・1 DAY AGO

OSLO, Aug 15 (Reuters) - Norway will have to phase out some of its old oil and gas fields prematurely to achieve its 2030 climate goals, unless it can use carbon-free power on more offshore platforms to cut their emissions, the country's Climate Minister Espen Barth Eide said.
ENERGY INDUSTRY・2 DAYS AGO
Reuters

WASHINGTON, Aug 14 (Reuters) - U.S. President Joe Biden on Sunday congratulated India on 75 years of independence and said the United States and India were "indispensable partners" that would continue to work together to address global challenges in the years ahead.
WORLD・2 DAYS AGO
Reuters

MOSCOW, Aug 15 (Reuters) - The rouble slid past 61 to the dollar on Monday as the conversion of depository receipts in Russian companies to local shares got underway, and as foreign investors from designated "friendly" countries were able to return to the bond market.
CURRENCIES・2 DAYS AGO
Reuters

LONDON, Aug 17 (Reuters) - British consumer price inflation is likely to peak at an annual rate above 15% in the first three months of next year unless there are government measures to lower prices, economists at U.S. bank Citi forecast on Wednesday.
BUSINESS・2 HOURS AGO
Reuters

HONG KONG (Reuters) -The operator of the Hong Kong Stock Exchange (HKEX) flagged continued pressures from global political tensions and other negative factors as it posted a 27% fall in first-half profit on Wednesday.
STOCKS・2 HOURS AGO
Reuters

BERLIN, Aug 17 (Reuters) - Norse Atlantic Airways (NORSE.OL), which seeks to break into the long-haul market between Europe and the United States, has seen strong bookings for the upcoming autumn season, its chief executive said on Wednesday.
AEROSPACE & DEFENSE・19 MINUTES AGO
Reuters

ZURICH, Aug 17 (Reuters) - The Swiss government is expected to run a budget deficit of 5 billion Swiss francs ($5.25 billion) for 2022, it said on Wednesday, citing extraordinary costs from tackling the COVID-19 pandemic and supporting new arrivals from Ukraine.
PUBLIC HEALTH・1 HOUR AGO
Reuters