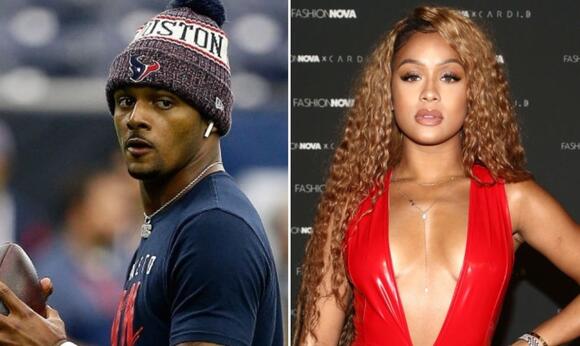 Watson, 25, has made exceptions, posting the occasional video of himself working out, promoting charity events, and most recently, dancing at a wedding.

According to his and the groom's Instagram accounts, the three-time Pro Bowl QB served as a groomsman at a recent wedding. Watson would later share a video of himself, his girlfriend Jilly Anais, and two others dancing.

The fifth-year quarterback appears to be enjoying at least time moment of his summer, which looks likely to be an extended one. With no end in sight for the Watson lawsuits, the likelihood of a trade being proposed remains up in the air.

When could a timetable be set? Maybe after his name is cleared? That's a start to say the least. For now, he'll remain away from NRG Stadium as July presses forward.

And it seems a safe bet to say that once his vacation does come to an end, it won't be in Houston. Watson still is asking for a trade following a fallout with ownership earlier this offseason.

Wherever Watson does end up next, and whenever that may be, he will be fresh off of an MVP-caliber season. During the 2020 campaign, he led the NFL in passing yards with 4,823, added 444 rushing yards and scored 36 total touchdowns.

The Texans will report to training camp on July 27.

Deshaun Watson’s relationship with girlfriend Jilly Anais is going strong as the Texans quarterback remains on the sideline amid allegations of sexual assault. The singer shared a sweet birthday tribute to Watson in an Instagram post Tuesday. Anais shared a series of photos that showed the couple cozied up on a recent tropical vacation.
NFL・4 DAYS AGO
ClutchPoints

When exactly Deshaun Watson will return to action remains unknown. What’s certain is that he will not be taking snaps in Week 1 of the 2021 NFL regular season for the Houston Texans. Instead, it will be veteran Tyrod Taylor who will try to steer the Texans’ offense against the Jacksonville Jaguars at home on Sunday.
NFL・11 DAYS AGO
Larry Brown Sports

Here is when Texans could finally trade Deshaun Watson

The Houston Texans have seemingly made it clear that Deshaun Watson is not part of their future plans, as the quarterback will not start in Week 1 and is expected to be a healthy scratch. A trade is viewed as inevitable, but when?. Ian Rapoport of NFL Media said Sunday...
NFL・6 DAYS AGO
The Spun

The Houston Texans reportedly want a combination of six players and/or draft picks for quarterback Deshaun Watson. But a new report claims Houston already had that type of offer on the table–and turned it down. On the FOX pregame show earlier today, insider Jay Glazer said the Texans were offered...
NFL・6 DAYS AGO

Texans reportedly keeping Deshaun Watson away from rest of team

Deshaun Watson's situation with the Houston Texans continues to get more awkward. According to Jay Glazer of Fox Sports (h/t Pro Football Talk), the Texans are keeping the three-time Pro Bowler away from other players. He's still working out at the facility but is separated from the rest of the team.
NFL・6 DAYS AGO
On3.com

The trade rumors surrounding Deshaun Watson have gone quiet. It seems unlikely the Houston Texans will reach a deal with another team this season, according to FOX NFL’s Jay Glazer. “I don’t see a scenario where Deshaun Watson ever plays for the Texans again,” Glazer said. “The wild part is,...
NFL・5 DAYS AGO
NBC Sports Chicago

The Houston Texans have not yet said that Deshaun Watson will not play for them in 2021, but all signs continue to point in that direction. The Texans have announced that Tyrod Taylor will start their season opener against the Jacksonville Jaguars on Sunday, meaning Watson will likely be inactive. General manager Nick Caserio acknowledged that during an appearance on Sports Radio 610 Wednesday morning, though he would not commit to any specific plan for Watson going forward.
NFL・10 DAYS AGO

No head coach in the NFL is stirring and sipping his drink with a shorter straw than the one David Culley drew from the Texans. You cannot help but feel for Culley, a well-respected NFL lifer who finally got his first head-coaching chance this year at age 65, after working as an assistant coach for 26 years with six different teams.
NFL・7 DAYS AGO
audacy.com

The Texans do not expect Deshaun Watson to play in any capacity Sunday against the Jacksonville Jaguars, general manager Nick Caserio confirmed Wednesday morning on SportsRadio 610. Tyrod Taylor had already been announced earlier in the week as the starter. Head coach David Culley said Monday that Taylor would start...
NFL・10 DAYS AGO
Bleacher Report

Deshaun Watson Officially Ruled out for Texans vs. Jaguars; Not Injury Related

The Houston Texans officially ruled out quarterback Deshaun Watson on Friday for Sunday's Week 1 game against the Jacksonville Jaguars. The Texans listed "not injury related" as the reason for Watson's absence. Watson reportedly requested a trade from the Texans during the offseason, and he is also facing 22 civil...
NFL・8 DAYS AGO
NESN

The Houston Texans might have missed their opportunity to cash in to the highest degree on the franchise’s most valuable asset. Deshaun Watson probably isn’t going to play at all in the 2021 NFL season, but his name nevertheless will remain in the news. In addition to his ongoing legal battles, the star quarterback doesn’t appear to have moved off of his trade request.
NFL・5 DAYS AGO

Trade talks for Texans QB Deshaun Watson could pick up around Nov. 2 deadline

Deshaun Watson will watch today's Texans season opener against the Jaguars already ruled out for non-football reasons. Barring a dramatic turn, this is the way it will be all season, according to sources close to the situation in Houston. A franchise quarterback in his prime -- a healthy scratch. However,...
NFL・6 DAYS AGO
Bleacher Report

The Houston Texans reportedly wanted a combination of six players or draft picks for Deshaun Watson in trade talks this summer. ESPN's Adam Schefter reported Texans general manager Nick Caserio was "unwilling to budge" on his desired trade package. Watson is facing 22 civil lawsuits filed by women accusing him of sexual assault and misconduct. Ten women, including two who have not filed civil lawsuits, have also filed formal complaints with police in Houston.
NFL・7 DAYS AGO
Sportsnaut

Deshaun Watson won’t be suiting up for the Houston Texans this season. With Week 2 already here, it seems increasingly unlikely the embattled star quarterback will be taking the field with any other team in 2021, either. A.J. Perez of Front Office Sports reported on Thursday that the active criminal...
NFL・2 DAYS AGO
gobblercountry.com

The Houston Texans officially named former Virginia Tech Hokies superstar QB, Tyrod Taylor, as the starter for their 2021 season. Fellow ACC quarterback and Clemson Tigers standout, Deshaun Watson, who would normally be the starter for Houston, is embroiled in a mire of civil legal affairs. He requested a trade earlier this year, in January, so it is no surprise that Tyrod has been named the starter as the team looks for stability at the most important position.
NFL・11 DAYS AGO
The Spun

Earlier this week, the Houston Texans officially announced their starting quarterback for Week 1 of the 2021 regular season. Houston will be starting veteran quarterback Tyrod Taylor on Sunday against the Jacksonville Jaguars. Of course, that announcement led to questions about star quarterback Deshaun Watson. Watson is in the midst...
NFL・10 DAYS AGO
Washington Post

Houston Texans Coach David Culley said the quiet part out loud Monday, announcing who will lead the offense in the team’s season opener Sunday against the Jacksonville Jaguars. “Tyrod Taylor will start for us at quarterback, for sure,” Culley told reporters. “Not a very vocal guy, but first guy in,...
NFL・11 DAYS AGO
nfltraderumors.co

ESPN’s Mike Wells lists Colts WR Michael Pittman as a potential breakout player in 2021, as he’s set up to be Indianapolis’ No. 1 receiver while Hilton is out and might not give that role back. Colts OC Marcus Brady said LT Eric Fisher is “not there yet” from his...
NFL・11 DAYS AGO