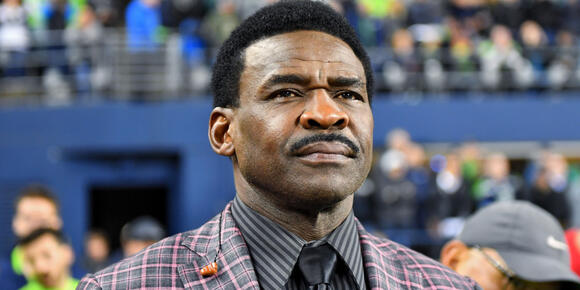 FRISCO - Michael Irvin was trying to be nice, pausing in a hotel lobby to interact with some fans. As his reward? the iconic Dallas Cowboys wide receiver and Hall-of-Famer, upon reaching to retrieve the bag he'd set down on the floor, realized that one of those "fans'' had stolen a piece of his luggage.

“I have to come out of this depression. So I am sharing with ALL,” Irvin wrote on Twitter.“This is my necklace that was in my bag. I designed it as a first-down chain, holding an all diamond football, which is holding an all-diamond cross.”

And, Irvin added, there is further significance.

“On each end of the cross are diamonds I acquired at the birth of my children Myesha, Chelsea, Michael and Elijah,'' he said. "It was a piece I built over my life that represents. Faith, Family and Football and my own sentimental way of praying to GOD please always protect my babies.

Irvin, 55, says the special family jewelry item was stolen from him while he was at a hotel in Miami. Irvin says he was robbed of the item when he put his baggage down while at the hotel in order to interact with some fans.

Irvin is a victim of his own generosity here, which makes this all the more unfortunate. The all-time great receiver is almost always buoyant and cooperative when it comes to fans. But now? Irvin is offering a reward to anyone with information on what happened. ... as he now needs to locate that "fan'' who robbed him.

Of course, it is not surprising that while he's still in search of his property, he returned to being buoyant by posting the above video.

It's not safe or wise to own flashy expensive jewelry these days. Just don't. People have lost all respect and morals and they will kill to take what you have.

3 or 4 years ago I got into some beef with about 4 hot-headed teens and a group homeboys stopped to help me fight them. The teens took off not wanting the smoke but my phone I put down was missing. I guess that was payment for helping me lol.

wow! how awful. I just hope someone sat their bag down, to interact with him.. and picked up his bag by accident.. realize the error & get his whole complete bag with items intact back to rightful owner. praying for positive outcome....

Man punches woman after she slaps him at Steelers game

Fans in the stands continue to duke it out at NFL preseason games. One week after a bloody brawl among fans at a Rams-Chargers game in Los Angeles, video of another fight at the Lions-Steelers game went viral Saturday night. A woman was shown arguing with a man in front...
NFL・27 DAYS AGO
nfldraftdiamonds.com

Kevin Faulk is currently the running backs coach at LSU, but the former legendary running back is mourning the death of his baby girl this morning. According to multiple reports, his 19 year old daughter Kevin and a student at LSU tragically passed away this week. LSU made a statement...
NFL・3 DAYS AGO
New York Post

Tom Brady thinks he can play football until age 50 — but his wife Gisele Bundchen might feel differently. In a new installment of Tampa Bay’s “Tommy & Gronky” series, Brady and Buccaneers tight end Rob Gronkowski answer the internet’s most searched questions about them. “Can Tom Brady play until...
NFL・2 DAYS AGO
The Spun

We’re one full week (and one Thursday night Week 2 game) into the 2021 NFL regular season. There are several deserving picks, as a couple of teams looked pretty bad during the league’s opening weekend. However, one stands out according to Troy Aikman’s rankings. The former Dallas Cowboys star quarterback...
NFL・7 HOURS AGO

Audacy NFL insider and former Dallas Cowboys great Michael Irvin joins Shan & RJ and to talk Cowboy number changes, Dak's arm, and what his expectations are going into the Cowboys/Buccaneers opener. Watch the video above, or listen to the full audio interview below:
NFL・10 DAYS AGO
Dallas News

The Dallas Cowboys are an iconic franchise, and Dak Prescott is their heart and soul

Looking at the Cowboys 2021 opponents after week one

Six one-score games, five touchdowns over 65 yards, four teams scoring more than 35 points, three fourth-quarter touchdowns to tie or take the lead, two improbable comebacks, and a partridge in a pear tree. NFL football is back, and week one did not disappoint. With dominating wins and embarrassing losses,...
NFL・4 DAYS AGO
The Independent

The “Hard Knocks” franchise will have regular-season episodes for the first time when “Hard Knocks In Season: The Indianapolis Colts” debuts on Nov. 17 on HBO NFL Films announced the series during halftime of Thursday night’s game between the New York Giants and Washington Football Team It will be the Colts’ first appearance on “Hard Knocks,” which debuted in 2001 by following the Baltimore Ravens through training camp as they began defense of their Super Bowl title. The Dallas Cowboys recently wrapped up the 16th edition of the documentary series, becoming the first to make three appearances.The Colts series will...
NFL・1 DAY AGO

Minnesota Vikings defensive end Everson Griffen will miss Sunday’s game against the Arizona Cardinals due to an injury suffered in
NFL・1 DAY AGO
nfldraftdiamonds.com

Keith McCants the former hard hitting linebacker from the University of Alabama was found dead in his house on Thursday morning. According to police reports, the 53 year old was the fourth overall pick in the 1990 NFL Draft by the Tampa Bay Buccaneers. The Pinellas County Sherrif’s Office told...
NFL・15 DAYS AGO
The Spun

The New Orleans Saints are making some final moves before this afternoon’s 53-man roster deadline. And one of these moves featured the release of backup quarterback Trevor Siemian. But, this doesn’t mean his time with the Saints organization is done. According to NFL Network insider Tom Pelissero, the team is...
NFL・18 DAYS AGO
ClutchPoints

Dallas Cowboys quarterback Dak Prescott and wideout Amari Cooper were the first ones to offer motivational words to the team after their loss against the Tampa Bay Buccaneers. Despite the heartbreaking 31-29 loss against the defending Super Bowl champs, both Prescott and Cooper shrugged off the loss and chose to stay the course as they start their 2021 NFL season with a defeat.
NFL・8 DAYS AGO
FanSided

Tennessee Titans wide receiver Julio Jones got hit with a pretty hefty fine from the NFL on Saturday. Jones was called for unnecessary roughness during the Titans’ blowout loss to the Arizona Cardinals last weekend. The NFL has fined Jones $10,815 as a result, per NFL insider Tom Pelissero. “The...
NFL・4 HOURS AGO
Sportsnaut

Steve Riley, who was a first-round pick of the Minnesota Vikings and starred for the team as an offensive lineman
NFL・12 HOURS AGO
The Spun

On Thursday night, the Dallas Cowboys faced off against the Tampa Bay Buccaneers in the first game of the NFL season. During the first half of action, the Cowboys made a very interesting decision. The team decided not to give the ball to star running back Ezekiel Elliott – despite all of the offseason hype.
NFL・8 DAYS AGO
The Clemson Insider

ESPN analyst, Hall of Fame coach have praise for Elliott

Clemson offensive coordinator Tony Elliott got some Twitter love Friday from an ESPN analyst and a Hall of Fame coach. Dan Orlovsky -- who will call Saturday's 3:30 p.m. game between the Tigers and Georgia (...)
NFL・1 DAY AGO
Sportsnaut

Le’Veon Bell Has Message For Critics After Signing With Ravens

Heading into the 2021 season, the Baltimore Ravens find themselves with a major need for depth at the running back position. As a result, the team has signed an old AFC North enemy to help satisfy that need. On Tuesday, the Ravens added former Pittsburgh Steelers star Le’Veon Bell to...
NFL・10 DAYS AGO