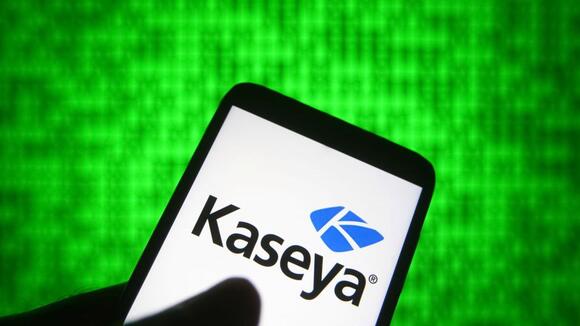 “What’s your message to Putin on cyber? Any message after your briefing on cyber from your officials?” a reporter asked him.

“I will deliver it to him,” Biden responded.

The latest and single largest global attack on record targeted Kaseya in what’s known as a supply-chain attack.

It affected hundreds of companies worldwide, including railways and a Swedish grocery chain.

So how does this keep happening?

“Very vulnerable companies can be easily identified, targeted, exploited,” said Jason Crabtree, CEO of cybersecurity and risk analytics company QOMPLX. “There’s a hell of a lot of money on the line for these types of criminal groups that are finding a great way and a reliable way of getting paid.”

The White House said there have been ongoing high-level talks since the president’s summit with Russian President Vladimir Putin, but it is not commenting on possible retaliation.

President Biden has said the damage to U.S. businesses from the Kaseya breach is minimal.

Experts are calling for stronger disclosure laws to protect consumers.

“Ransomware is still an iceberg problem. There’s a small percentage of these events that you’re actually seeing reporting on, and many more go unreported,” Crabtree said.

The Russian state is also denying involvement in a recent hack breaching a technology provider for the Republican National Committee.

The RNC has said that none of its data was accessed in that breach.

WASHINGTON (AP) — It was an hour President Joe Biden would no doubt like to forget. On Friday, the Pentagon acknowledged that a drone strike in Afghanistan killed 10 civilians, including seven children, not terrorists. A panel advising the Food and Drug Administration voted to not recommend COVID booster shots for all Americans over 16, dashing an administration hope. And France announced it was recalling its ambassador to the U.S. out of anger for being cut out of a secret nuclear submarine deal Biden had struck with the United Kingdom and Australia.
PRESIDENTIAL ELECTION・9 HOURS AGO
WashingtonExaminer

WASHINGTON — President Joe Biden is holding private talks Friday morning with world leaders — part of a last-minute push to convince other nations to commit to deep carbon emissions cuts before the upcoming United Nations climate summit. Like the climate summit held earlier this year, this gathering of world...
PRESIDENTIAL ELECTION・20 HOURS AGO
Daily Fort Worth

Some people simply can’t control themselves and are risking decades in prison for their reckless actions and this man is just that kind of person because he is about to spend major part of his life in prison after he shot to death one person and injured another because they were Joe Biden supporters.
U.S. POLITICS・3 DAYS AGO

A proposal by congressional Democrats to increase federal cigarette and cigar taxes, while introducing new vape levies, would not break President Joe Biden's promise not to raise taxes on households earning less than $400,000 a year, according to the White House.
PRESIDENTIAL ELECTION・2 DAYS AGO
USA TODAY

Organizers of the rally supporting people charged in the Capitol riot Jan. 6 are urging participants not to wear clothes supporting Trump or Biden.
WASHINGTON, DC・2 DAYS AGO
AFP

Mexican President Andres Manuel Lopez Obrador on Thursday appealed to US President Joe Biden to end sanctions against Cuba, warning the measures risked fomenting unrest. Lopez Obrador made the plea alongside his Cuban counterpart Miguel Diaz-Canel, who was a rare guest of honor at an Independence Day military parade in Mexico City. "Hopefully President Biden, who has sufficient political sensitivity... puts an end forever to the political grievances towards Cuba," Lopez Obrador said. The leftist leader called "respectfully" for Washington to lift the embargo against Cuba, arguing that "no state has the right to subdue another people, another country."
PRESIDENTIAL ELECTION・1 DAY AGO
Newsweek

Biden: 'I Have Great Confidence in Gen. Milley' as GOP Calls for Ouster Over China Calls

Biden defended the Joint Chiefs Chair amid backlash over calls he had with his Chinese counterpart during the previous administration.
PRESIDENTIAL ELECTION・2 DAYS AGO

BOISE, Idaho (AP) — More than 1,000 protesters gathered in Boise, Idaho, during a visit by President Joe Biden to express their displeasure about his coronavirus plan, the election and other issues. Biden was in Boise as part of a swing through three Western states to promote his administration’s use...
IDAHO STATE・4 DAYS AGO
CBS News

There has been "no indication" the Russian government has tried to rein in criminal ransomware groups known to be operating from its soil, a top FBI official said Tuesday, despite the repeated insistence in recent months by the U.S. government that it should do so. "Based on what we've seen,...
PUBLIC SAFETY・3 DAYS AGO
FingerLakes1

People continue to protest against the vaccine mandates in public places in Elmira. The vaccine mandate was announced Thursday during President Joe Biden’s speech and would require 100 million Americans to get the vaccine. Sunday afternoon, protesters gathered outside of Wisner Park to say they wanted the right to choose.
ELMIRA, NY・4 DAYS AGO

What Happens if You Don't Get Vaccinated Under Biden's New Mandate?

Potentially millions of American workers will have to be vaccinated, if they aren't already, under President Joe Biden's latest efforts to curb the spread of COVID-19, the virus that has killed more than 650,000 people in the United States. They range from federal employees to health care workers and even...
POTUS・7 DAYS AGO
WSLS

Queen Elizabeth II sent a message to President Joe Biden on the 20th anniversary of the attacks on September 11, 2001. She said, “As we mark the 20th anniversary of the terrible attacks on 11th September 2001, my thoughts and prayers - and those of my family and the entire nation - remain with the victims, survivors and families affected, as well as the first responders and rescue workers called to duty.”
PRESIDENTIAL ELECTION・7 DAYS AGO
CNN

(CNN) — President Joe Biden spoke with China's President Xi Jinping on Thursday evening as relations between the two countries have remained tense in recent months, particularly in cyberspace, with the US having accused China of widespread malfeasance, including a massive hack of Microsoft's email system and other ransomware attacks.
FOREIGN POLICY・8 DAYS AGO
FOX 23 Tulsa KOKI

How the Sept. 11 attacks would shape Biden's presidency

WASHINGTON — (AP) — For then-Sen. Joe Biden, Sept. 11, 2001, started like most days: riding the 8:35 a.m. Amtrak to work. He had a relatively quiet day planned, including meetings with constituents and a nomination hearing. Then his wife, Jill, called, telling him a plane had crashed into the...
PRESIDENTIAL ELECTION・8 DAYS AGO

John Roberts Apologizes for Laughing When GOP Rep. Says Biden Admin. Should Own Afghanistan Missteps: ‘I Do Not Expect That Will Happen’

Fox News Anchor John Roberts apologized on air to Rep. Michael Waltz (R-FL) and viewers of America Reports for a poorly timed chuckle. Waltz had expressed his desire for the Biden administration to take accountability on its handling of the military withdrawal from Afghanistan. The former Green Beret was speaking...
PRESIDENTIAL ELECTION・10 DAYS AGO
POLITICO

Australians are outraged as Joe Biden refers to Prime Minister Malcolm Turnbull as “That Fella Down Under.”

Australians are outraged as Joe Biden refers to Prime Minister Malcolm Turnbull as “That Fella Down Under.”. President Joe Biden delighted some and confused others in Australia when he appeared to forget the name of Prime Minister Scott Morrison, whom he referred to as “that fella from Down Under.”. During...
POLITICS・2 DAYS AGO
WashingtonExaminer

Newsmax host Grant Stinchfield cut off an Iraq War veteran on his show Wednesday after he criticized former President Donald Trump for his handling of Afghanistan.
POTUS・1 DAY AGO