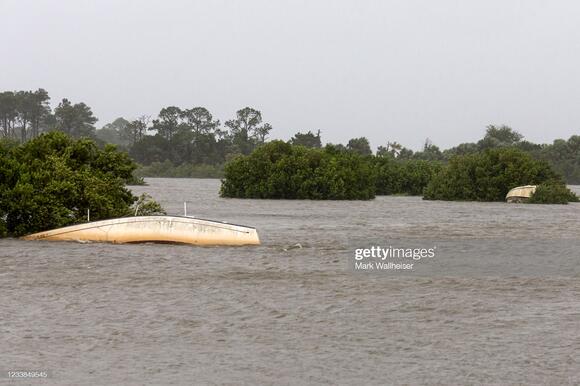 As of 11 a.m. Eastern time on Wednesday, Elsa was over Taylor County, southeast of Tallahassee, moving north at 14 mph with maximum sustained winds of 65 mph, the National Hurricane Center said. The storm was expected to move north through the afternoon before turning northeast toward Georgia late Wednesday.

Elsa became the first hurricane of the season on Friday, when it strengthened into a Category 1 hurricane before weakening into a tropical storm.

The storm passed over the Florida Keys on Tuesday, bringing rain and gusting winds. It strengthened into a hurricane again on Tuesday night but had weakened into a tropical storm again by the time it made landfall around 11 a.m. Wednesday in Taylor County.

Ahead of the storm, Tampa International Airport said it would suspend operations by 10 p.m. Tuesday. The airport reopened around 8:30 a.m. Wednesday.

Elsa’s path was watched closely in the Miami area, where rescue crews at the site of the collapsed condominium building in Surfside were forced to temporarily pause their efforts on Monday because of lightning. The center of the storm passed more than 100 miles west of Miami on Tuesday afternoon, bringing rain and heavy winds but sparing the site from the worst of the storm.

Elsa cut through Cuba on Monday, bringing gusty winds, torrential rains, flooding, electrical outages and some property damage. Cuba evacuated 180,000 people on Sunday before the storm; in Havana, the capital, a fleet of state buses ferried passengers from rickety buildings to shelters. But Elsa weakened as it moved across the island on Monday, passing about 20 miles east of Havana, and the capital was mostly calm on Tuesday.

Elsa has been blamed for the deaths of at least three people elsewhere in the Caribbean.

The Caribbean Disaster Emergency Management Agency reported one death on Saturday in Soufrière, St. Lucia. And in the Dominican Republic, a 15-year-old and a 75-year-old woman died in separate episodes on Saturday when walls collapsed on them in heavy rain, the country’s Emergency Operations Center said in a statement.

And at least one boat overturned in the storm. On Monday night, a vessel carrying 22 people from Cuba capsized about 26 miles southeast of Key West, the Coast Guard said in a statement on Wednesday, adding that 13 people were rescued, with nine still missing.

“These ventures are dangerous and can often lead to casualties, especially during tropical storms,” said Cmdr. Jacob McMillan of the Coast Guard. “The seas are unpredictable and unforgiving.”

Elsa is the fifth named storm of the 2021 Atlantic hurricane season. The first, Ana, formed on May 23, making this year the seventh in a row that a named storm developed in the Atlantic before the official start of the season on June 1.

The links between hurricanes and climate change are becoming more apparent. A warming planet can expect to experience stronger hurricanes over time, and a higher incidence of the most powerful storms — though the overall number of storms may drop, because factors like stronger wind shear might keep weaker storms from forming.

Scientists with the National Oceanic and Atmospheric Administration forecast that there would be 13 to 20 named storms this year, six to 10 of which would be hurricanes, and three to five major hurricanes of Category 3 or higher in the Atlantic. Last year, there were 30 named storms, including six major hurricanes, causing meteorologists to exhaust the alphabet for the second time and move to using Greek letters.

Lord please keep your people safe in Florida and around this world as they battle hurricanes, storms and personal storms in their lives. God please ride with them through the storms

I’m from Tampa Bay Area outside of strong winds at 3:30 in the morning once again we avoided a major catastrophe thank you God

Let's not loose focus on the main reason we are praying!!! Remember to sow good seeds 🙌 & Karma has no expiration date!!Father God please keep everyone & anyone safe during this storm. Lord, help our hearts to move on. Please don't allow our hearts to grow bitter for we know the fight isn't ours to fight. You said you will fight our battle for us. You also said you will make our enemies our footstools. Send ur guardian angels to protect, heal & make safe during this hurricane. Blessed them from the crown of their heads to the soles of their feet. Lord, please do not allow any hurt, harm nor danger come to them. Lord, please dont allow any accidents, incidents or any occurrences in your precious name Amen & Amen 🙏❤️🙌

Last bus out: How one family's trip on a migrant bus delivered a dream

With a camera in hand, a Venezuelan family documents the 2,200-mile journey from an El Paso migrant welcome center to an uncertain life in New York City.
EL PASO, TX・29 MINUTES AGO
The New York Times

An undated photo provided by NASA shows the CAPSTONE spacecraft, which is currently orbiting the moon, at Tyvak Nano-Satellite Systems in Irvine, Calif., in February before it was launched. (Dominic Hart/NASA via The New York Times)
COLORADO STATE・11 DAYS AGO
The New York Times

The Powerball jackpot has climbed to a record $1.6 billion ahead of the next drawing on Saturday, setting off a frenzy of ticket buying nationwide by routine lottery players and even some skeptics, hopeful that the 1-in-292.2-million odds of winning will tilt in their favor.
ALABAMA STATE・21 DAYS AGO