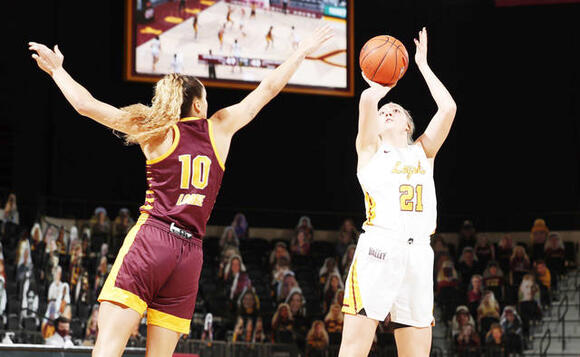 Allison Day, an Eastern Brown High School graduate, earned first-team Missouri Valley Conference honors for her performance on the hardwood this past season.

Four years ago, Allison Day saw her senior season at Eastern Brown end before it started after a knee injury forced her to the sidelines for the entire campaign.

Now, she’s looking to make up for lost time.

Day, currently a senior at Loyola University in Chicago, helped her Rambler teammates to a history setting season. She led the team in scoring (11.7 points per game) and rebounding (6.9 rebounds per game), earning a first-team all-Missouri Valley Conference nod. She is just the fifth player in Loyola Chicago history to earn that honor.

“It was a growing experience,” Day said. “I was finally an upperclassmen, getting to that point where I was confident in what I was doing.”

The first two seasons were up-and-down for Day. She broke into the starting lineup as a freshman, earning a spot on the all-freshman team during her first campaign.

As a sophomore, Day started 20 games and finished second on the team in scoring. The team finished that year with a winning record, 15-14, but the Coronavirus pandemic canceled the MVC tournament.

This season, the MVC was no joke. Missouri State finished undefeated in the conference with Drake right behind at 13-5. Illinois State (12-6 in league play) and Northern Iowa (11-7) rounded out the top four. Bradley (10-8) won the MVC tournament title, knocking off Loyola Chicago in the semifinal.

“[The MVC is] tough,” Day said. “Drake and Missouri State are the big dogs, but there were six teams that could really go either way. They would give the big dogs a run for their money.” Reflecting on her first three seasons, Day said she is finally starting to get a feel for her approach.

“It’s been a little bit of a roller coaster,” Day said. “Right now, it’s kind of settled down. I know what’s going on, I know how my team is and how the conference works. I can relax and just play.” The winding down of restrictions due to the COVID-19 pandemic may have gone a long way in helping Day relax.

“We got hit with something new every day,” Day said. “False positives, the other teams having positives and not playing…even our tournament got messed up because of a positive test.”

The pandemic forced changes to scheduling, limiting non-conference games and forcing league games to be played in groups of two on Fridays and Sundays. The latter was a positive feature, according to Day, as it allowed families to watch the games easier.

Before the season even started, the teams faced challenges that they haven’t had to deal with this year.

“We didn’t have much of a summer together,” Day said. “For the first part of the preseason we were in small groups, we weren’t allowed to practice as a team. The preparation was all delayed to begin with.”

Once the season actually began, a positive test in the program could throw the entire season into flux.

“It’s full team [only] three days a week,” Day said. “If somebody does test positive and you have to quarantine, then you’re out practice, you’re out weightlifting. It’s just a lot of stressful components in a season.”

On the court, Day and the Ramblers were able to overcome those challenges and make a little history. Ellie Rice scored her 1,000th career point in the team’s finale against Abilene Christian on March 21.

“She was going to med school, we knew she wasn’t going to come back,” Day said. “It was exciting for her to get to have that accomplishment.”

Day hopes to match Rice in her senior campaign. She currently has 831 points at Loyola, 169 away from a milestone she didn’t get to achieve at Eastern Brown.

As she prepares to embark on her senior campaign, Day hopes to make a few tweaks to her game.

This past season, the team finished 13-15 overall. The Ramblers’ final win came in the last game of the Women’s Basketball Invitational, the first postseason berth in school history. Day hopes that momentum carries into this upcoming year.

“We’re finally getting to the point where we’re a good team,” Day said. “It’s not like we’re just a better team than last year. We’re setting a tone for how this program is ran, which is really cool to be a part of.”

She and the Ramblers also have their eyes on bringing the program a winning season for just the second time since the 2012-2013 campaign.

“We were pretty close last year,” Day said. “I think we have even more good components this year, we’re going to be better. Winning is on all our minds.”

Sept 25 (Reuters) - At least three people died on Saturday after an Amtrak passenger train derailed in north central Montana, according to an Associated Press report. The report cited the Liberty County Sheriff's Office, which said the three deaths were among multiple casualties. The Empire Builder train, which runs...
TRAFFIC・5 HOURS AGO
The Associated Press

TORONTO (AP) — China, the U.S. and Canada completed a high-stakes prisoner swap with joyous homecomings for two Canadians held by China and for an executive of Chinese global communications giant Huawei Technologies charged with fraud, potentially bringing closure to a 3-year feud that embroiled the three countries. Canadian Prime...
POLITICS・18 HOURS AGO
Reuters

NEW YORK, Sept 25 (Reuters) - A requirement for New York City school teachers and staff to get vaccinated for COVID-19 was temporarily blocked by a U.S. appeals court just days before it was to take effect, but the court on Saturday set a hearing on the matter for next week.
EDUCATION・4 HOURS AGO
The Hill

Texas Gov. Greg Abbott is barreling forward with an audit of the 2020 election in his state’s four largest counties after mounting pressure from former President Trump . The move comes as Arizona releases a much-anticipated election review of its own, which led to increasing friction within the state’s Republican Party and ultimately found Trump lost to President Biden by an even wider margin last year.
TEXAS STATE・13 HOURS AGO

Workers whose jobs put them at high risk of exposure to COVID-19 are now eligible for COVID-19 booster shots, according to the latest guidance from the the Food and Drug Administration and the Centers for Disease Control and Prevention. A third dose of the Pfizer-BioNTech COVID-19 vaccine is also now...
PUBLIC HEALTH・1 DAY AGO
ABC News

The results of a partisan-led review of Maricopa County's ballots found no substantial change in official election results.
ARIZONA STATE・1 DAY AGO
Reuters

BERLIN, Sept 26 (Reuters) - Germans vote in a national election on Sunday that looks too close to call, with the centre-left Social Democrats (SPD) mounting a strong challenge to retiring Chancellor Angela Merkel's conservatives. Merkel has been in power since 2005 but plans to step down after the election,...
ELECTIONS・7 HOURS AGO
Fox News

KABUL, Afghanistan (AP) – The Taliban hanged a dead body from a crane in the main square of Herat in western Afghanistan, a witness said Saturday, in a gruesome display that signaled a return to the Taliban’s brutal ways. Wazir Ahmad Seddiqi, who runs a pharmacy on the side of...
WORLD・15 HOURS AGO

WASHINGTON, Sept 24 (Reuters) - The U.S. House of Representatives approved legislation on Friday to protect abortion services against growing Republican-backed state restrictions, including a Texas law that imposes a near-total ban on abortion, but the bill is unlikely to pass the Senate. The Democratic-controlled House voted 218-211 largely along...
CONGRESS & COURTS・1 DAY AGO
ABC News

Texas border crossing where migrants made camp to reopen

Thousands of Haitian migrants converged on the crossing in recent weeks.
TEXAS STATE・10 HOURS AGO