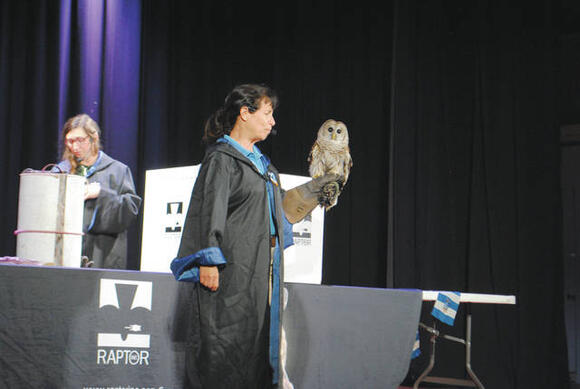 The Barred Owl makes a call that Charlene Howell described as sounding like “who-cooks-for you, who-cooks-for-you-all.”

The Gaslight Theater was filled with hoots of a different variety when the Brown County Public Library hosted a presentation from Raptor, Inc. about owls on July 1.

The demonstration was a Harry Potter/Fantastic Beasts-themed exploration into fun facts about owls, conservation, and the rehabilitation that Raptor, Inc. provides for the birds.

The representatives for the non-profit donned Harry Potter robes (fittingly, from the house of “Ravenclaw” from the series) and brought to the stage a Great Horned Owl, a Barred Owl, an Eastern Screech Owl, and a Barn Owl.

Among the shrieks of the barn owl, approximately 50 children laughed and enjoyed the show, which was the goal of Kelly Barrow, who planned the event.

Barrow is a librarian at the Georgetown branch of the Brown County Public Library, and organizes many events for the community. She said that she thought the owl event would align with other activities the library is offering this summer.

“I thought it would go well with our ‘Tales and Tails’,” she said.

The program is designed to read stories with children about animals, and learn more about them through crafts. She said that while planning the events, she kept what the children would enjoy in mind.

“(I thought) That sounds fun, I think the kids would think that’s fun,” she said.

Aubrey Werner was at the event with her grandmother, Carol Shay, and enjoyed seeing the various owls, but the smaller screech owl was her favorite of the flock.

During the presentation, the volunteers of Raptor, Inc. described that the owls in the show were as close to “pets” as an owl could get. The nonprofit has been performing raptor (birds of prey) rehabilitation for more than 38 years. Typically, the birds brought in for help are later released into the wild once they are healthy and independent. The owls in the presentation had un-resolvable issues such as blindness, or neurological disorders that would not allow them to thrive in the wild. The nonprofit admits more than 300 hawks, owls, falcons, osprey, eagles and vultures each year, according to their website.

Shay recollected that in the past year her family encountered Raptor, Inc. and witnessed their mission first-hand. Shay said that a screech owl flew in front of the car that her daughter was driving and was hit and injured. She said that they immediately called the Ohio Division of Wildlife, who directed them to Raptor, Inc. The owl was taken in for rehabilitation, and was nursed back to health.

“I’m guessing it was two months later, it was ready to be released,” Shay said. “They called my daughter and asked if she wanted to join.”

For more information about Raptor Inc., raptor conservation and rehabilitation, visit their website at http://www.raptorinc.org

Barrow said that there will be a similar event on July 9 at the Gaslight Theater with ambassadors for foxes and a live animal for the children to see. A full calendar of the library’s events throughout the year is available at https://www.browncountypubliclibrary.org/calendar/month.

Verna Mae Marks, 86 of Hamersville, went home to be with the Lord on Friday, September 17, 2021 at Ohio Valley Manor. She was born April 3, 19
8 DAYS AGO
News Democrat

As plans for the 2021 Seasons Marketplace and Cook Show at Heathfields Farm simmer into a full-flavored schedule, the show will be adding anot
13 DAYS AGO