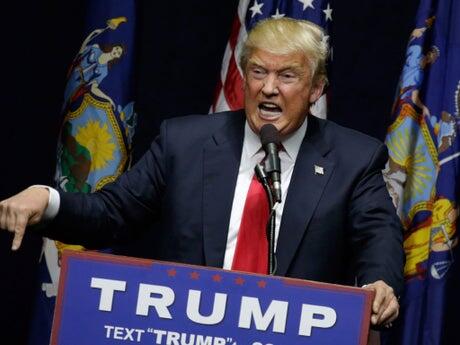 Former President Donald Trump has launched class-action lawsuits against Jack Dorsey and Mark Zuckerberg, the CEOs of Twitter and Facebook, respectively, in retaliation for his bans from their platforms.

The former president made the announcement at a press conference on Thursday morning. The lawsuits focus on what Mr Trump alleges is a pattern of bias against his supporters on the platforms.

“These companies have been coopted, coerced, and weaponized by government and by government actors to become the enforcers of illegal, unconstitutional censorship,” Mr Trump charged.

“That’s what it is, censorship,” he continued.

His lawsuits went on to accuse the companies of a pattern of arbitrary censorship against users “for no reason at all.”

“While Facebook’s censoring of Plaintiff was the most widely publicized action taken by Defendants, countless other Putative Class Members have had their views or content similarly deplatformed or censored by Defendants for arbitrary reasons or no reason at all,” reads the lawsuit against Facebook.

At his press conference, Mr Trump also resumed his longstanding criticism of Section 230 of the Communications Decency Act, which shields internet providers and social media companies from liability over posts made by users of their platforms.

"We are going to look so closely and make sure that the liability protections they have under Section 230 [are] at a very minimum changed and at a maximum taken away,” Mr Trump said.

Mr Trump was banned from both Facebook and Twitter following the attack on the US Capitol earlier this year, during which thousands of his supporters descended upon the building, overwhelmed law enforcement, and sought to stop the certification of his 2020 election defeat.

An oversight board at Facebook reassessed Mr Trump’s ban as recently as last month, and ruled at the time that it would be extended for at least two years.

Conservatives have long raised allegations of “shadowbanning” and censorship by moderators of major social media platforms, largely without any evidence other than pointing to actions the companies have taken against bad actors. The companies also came under criticism from the right last year for banning misinformation related to the Covid-19 pandemic on their platforms.

Officials at the two social media giants have insisted that the former president presents a danger to the public if allowed back on the platforms, citing the violence incited by his false claims about the 2020 election thus far.

"We know today’s decision will be criticized by many people on opposing sides of the political divide – but our job is to make a decision in as proportionate, fair and transparent a way as possible, in keeping with the instruction given to us by the Oversight Board,” Facebook’s Nick Clegg said in June upon the decision to continue Mr Trump’s ban.

“They shouldn’t be allowed to get away with this censoring and silencing, and ultimately, we will win. Our Country can’t take this abuse anymore!” Mr Trump said at the time in response.

The former president moved to launch his own blog earlier this year, titled “From the Desk of Donald Trump,” as a means of getting his message out but later shut down the blog, reportedly over concerns about its low traffic.

What an utter dumbass. Both are privately owned companies that have you sign an agreement to follow their TOS (terms of service). If you break the terms, you forfeit your service, this is just another lame attempt by a loser to try to keep themselves relevant....sad.

He is FORMER President. He is always arguing with somebody bc he has NOTHING real to say. He will lose these lawsuits. His own appointed judges think he is baseless, rightfully some Only the most die hard, vapid, and misled pay him any mind. Trumpy is over.

Should TRUMP be concerned about 15 CRIMINAL CHARGES brought against the TRUMP ORGANIZATION, and looking for GOOD, CHEAP LAWYERS to defend his very existence? And another LAWSUIT, REPUBLICANS will only donate so much to keep Trump out of trouble? 🤣

The latest in the political war between Trump and members of the Republican establishment as he seeks to maintain his control of the party.
POTUS・16 HOURS AGO
Business Insider

Gaetz called Twitter the "wet-market of ideas" and said the company was engaging in "domestic election interference" by fact-checking Trump's tweets.
CONGRESS & COURTS・10 HOURS AGO
Newsweek

Mary Trump, the niece of former President Donald Trump, has used one of her uncle's favorite insults as she responded to news of a lawsuit filed against her and The New York Times over a story about their family's wealth and tax practices. The former president has accused his niece...
NEW YORK CITY, NY・1 DAY AGO
Fox News

Facebook CEO Mark Zuckerberg has found himself caught up in a variety of controversies in recent weeks after a series of Wall Street Journal bombshells put a spotlight on issues at the social media company. The Facebook honcho managed to get The New York Times to change a story he...
ECONOMY・15 HOURS AGO

A newly released memo from a former member of Donald Trump’s legal team has shed further light on efforts to overturn the 2020 election – spelling out a plan for then-vice president Mike Pence to throw out the result in the Senate “without asking for permission”.Written by controversial conservative lawyer John Eastman, who appeared at the “Stop the Steal” rally that precipitated the Capitol insurrection on 6 January, the memo was obtained in full by CNN and is described in the new book Peril, an account of the Trump administration’s behaviour after the election. The book has generated multiple...
PRESIDENTIAL ELECTION・17 HOURS AGO
The Associated Press

WASHINGTON (AP) — The Biden administration will have a big say in whether the government releases information to Congress on the actions of former President Donald Trump and his aides on Jan. 6. But there could be a lengthy court battle before any details come out. The House committee investigating...
WASHINGTON, DC・8 HOURS AGO
spectrumlocalnews.com

TEXAS — Texas’ new law designed to block social platforms from banning people based on political views has drawn a lawsuit. Tech industry groups NetChoice and the Computer and Communications Industry in a suit filed Wednesday ague the law will prevent Twitter, Facebook and other platforms from stopping medical misinformation, hate speech, terrorist propaganda and other such language.
TEXAS STATE・14 HOURS AGO
Washington Post

Of all of the things that might crystallize a sense of despair about the ruthless effectiveness of Donald Trump’s habitual dishonesty, I wouldn’t have expected it to be a legalistic six-page memo about the boundaries of the U.S. Constitution. This week, following reporting from the newly published book “Peril,” by...
POTUS・1 DAY AGO

The subpoenas come as the committee continues to probe into Donald Trump's efforts to overturn the results of the 2020 presidential election.
POTUS・6 HOURS AGO
POLITICO

The former president is seeking at least $100 million in damages.
POTUS・1 DAY AGO
USA TODAY

Facebook Inc (NASDAQ: FB) CEO Mark Zuckerburg took a potshot at the New York Times Co (NYSE: NYT) on Tuesday. What Happened: In a tongue-in-cheek post on Facebook, Zuckerberg said, that it was “one thing for the media to say false things about my work, but it's crossing the line to say I'm riding an electric surfboard when that video clearly shows a hydrofoil that I'm pumping with my own legs.”
ECONOMY・2 DAYS AGO

"The Republican Party will not get better unless you stand up," the congressman said in a message to fellow GOP lawmakers on Saturday.
PRESIDENTIAL ELECTION・5 DAYS AGO
Urban Milwaukee

When it comes to censorship on social media, Rep. Shae Sortwell (R-Two Rivers) hopes to find bipartisan ground to stand on. Recently, he introduced three bills which aim to both combat online censorship and provide new avenues for free-speech challenges. “Big tech has long been violating people’s free speech rights through deleting, censoring and shadow-banning because they disagree with what is posted or who is posting it,” said Sortwell. “We expect this kind of suppression in China, but it is disturbing that we have allowed it to occur in America, the Land of the Free.”
CONGRESS & COURTS・4 DAYS AGO
Business Insider

House Speaker Nancy Pelosi was addressing the crisis of American democracy in the wake of the Capitol riot at a speech in London.
WORLD・6 DAYS AGO
Newsweek

Previously, the senator reportedly told Trump he had been "written off as dead" because of the U.S. Capitol riot.
POTUS・7 DAYS AGO
Newsweek

"You unelect these bastards, that's what you do. You don't give them another shot, another bite at the apple," Steele said
POTUS・7 DAYS AGO
Newsweek

The ad, which popped up in Marjorie Taylor Greene's congressional district, includes a quote purporting to be from the Bible.
GEORGIA STATE・9 DAYS AGO
Newsweek

The image was taken as Biden was visiting the Shanksville Volunteer Fire Company to pay tribute to those who died during the 9/11 attacks.
PRESIDENTIAL ELECTION・10 DAYS AGO
Washington Post

Mr. Trump is still all over some media

The Sept. 8 editorial “The 2020 forever war” was mistaken when it said former president Donald Trump was out of the headlines. Mr. Trump is not out. He and all his sycophants are all over the Internet and right-wing media spreading his usual lies and crazy talk. Deja vu all over again.
POTUS・11 DAYS AGO