Elsa churns up deadly tornadoes as it charges up East Coast: Latest path 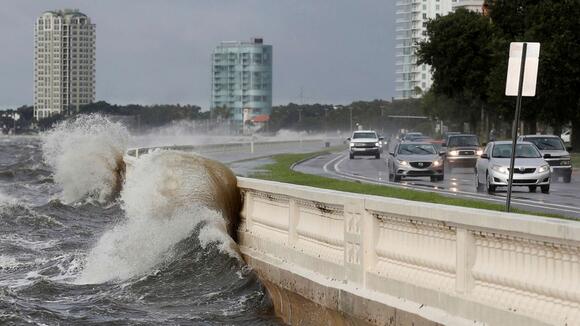 Tropical Storm Elsa is now charging up the East Coast after making landfall along Florida's Gulf Coast Wednesday, causing at least one death and miles of destruction, according to officials.

Elsa made landfall at about 11 a.m. Wednesday in Taylor County, in Florida's Big Bend region.

Elsa, which slammed Florida and Georgia with gusty winds and heavy rain, strengthened to a Category 1 hurricane Tuesday night before weakening back to a tropical storm before landfall.

One death person was killed after a tornado was reported in Jacksonville, according to Mayor Lenny Curry. A tree fell on the victim when the storm swept through the city, Curry said.

Curry said there were no other major injuries reported as of Wednesday evening but several homes and businesses were damaged and over 11,000 households were without power.

"Just be ready," he told the public.

A second tornado was reported to have caused serious damage at the Kings Bay Naval Submarine Base in Georgia. Photos and video showed motorhomes flipped on their sides and trees uprooted.

A spokesperson for the base told ABC News about 10 people were injured. None of the injuries are believed to be life-threatening, but they were serious enough to be transported off the base, according to the spokesperson.

A boat capsized near Key West as Elsa blew through on Tuesday, according to the Coast Guard. Nine people remain missing.

Elsa is now barreling up the East Coast, set to bring heavy rain and flash flooding from Georgia to Maine through Friday.

MORE: Power outages, carbon monoxide deaths: What you should know to stay safe

Elsa is forecast to weaken to a tropical depression by Thursday morning as it brings rain and wind to Charleston, Myrtle Beach and Wilmington.

By Thursday night Elsa will be blowing through Virginia, Maryland and Delaware with heavy rain, gusty winds and flooding. Elsa will hit New Jersey overnight Thursday into Friday.

On Friday morning, Elsa will head up the Interstate 95 corridor with heavy rain and gusty winds from New York City to Boston.