Legendary actor Kevin Costner took his time to share his sentiments about being a father to seven children.

Kevin Costner is one of Hollywood's greatest actors, with several box-office and critically-acclaimed films under his belt. His most memorable movies include "The Untouchables," "Hidden Figures," "The Bodyguard," "A Perfect World" and "Message in a Bottle."

But the achievement Kevin is most proud of is being a father to daughters Annie, Lily, and Grace; and sons Joe, Liam, Cayden, and Hayes. They are his children from three different relationships. The actor's children range in age from eight to 34.

He once said in an interview that having three sets of children could be very difficult, but that he wouldn't have it any other way.

"As my children interact together, there’s always this little bit of, 'Do you care for us now as much as you do them?' That’s just a natural thing that happens, and you have to talk about how big love is," shared the actor.

Kevin's three kids, Annie, Lily, and Joe, followed in their father's footsteps in the entertainment industry. Annie became a film producer and founded her own production company, Sound Off Films.

Meanwhile, Lily and Joe are actors who appeared in "The Postman" alongside their father. Lily was also in the movie "Black and White," while Joe appeared in "Tin Cup." Their brother, Liam, on the other hand, stays out of the limelight.

As for Kevin's three youngest kids, Grace, Cayden, and Hayes, they sometimes attend red carpet events with their father but mostly stay at home and lead normal lives.

LIFE AS A DAD

Kevin explained that the ability to love more people doesn't mean you love one person less." Love seems to be always able to hang on to as many people as needs to be in that circle," he said.

The "Hidden Figures" actor continued that he constantly reminds his older children not to get jealous when he gives more attention to their younger siblings.

Kevin tells them that they have had more time with him and that he wouldn't be able to spend as much time with their younger siblings. 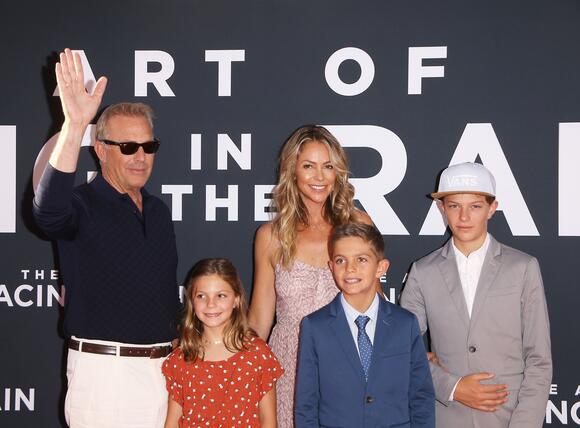 LIFE AS AN ACTOR

In another interview, the actor revealed that his three youngest children are not aware of what he does for a living. The actor shared the funny incident when his youngest daughter, Grace, saw him on television.

The "Yellowstone" actor is also close to his children and makes their breakfast whenever possible.

He was watching his movie, "Black or White," when Grace came in and sat next to him. She saw the scene when he came out of a pool. She took notice of his fat belly, and he explained to her that he was going to be a grandfather in the film.

Apart from his expertise as an actor, Kevin is also experienced in romantic relationships after being twice married. The "Field of Dreams" star married his first wife, Cindy Silva, in 1978 and had three children together, Annie, Lily, and Joe.

Sadly, their relationship only lasted over ten years and officially ended in 1994. Soon after, Kevin met Bridget Rooney, the mother of his son, Liam. Their relationship was brief and did not result in marriage.

It wasn't until 2004 that Kevin walked down the aisle again with model-turned-bag designer Christine Baumgartner. Together, they are parents to Cayden, Hayes, and Grace.

Despite the many negative news the pandemic brought, Kevin can proudly say that being in quarantine brought him closer to his wife and children. In an interview, he shared:

"Our partnership has really come into focus about what we do for each other and how we deal with our family."

Meanwhile, the "Yellowstone" actor is also close to his children and makes their breakfast whenever possible. However, when it comes to academic-related topics, it's Baumgartner they run to.

Joshua Morrow, who is best known for his role on “The Young and the Restless,” is a dedicated husband and a doting father to four beautiful children. Joshua Morrow joined "The Young and the Restless" in 1994 through the role of Nicholas Newman. In 1996, he won a Soap Opera Digest Award as "Outstanding Younger Lead Actor." For the role, he was also nominated for five consecutive Daytime Emmy Awards for "Outstanding Younger Actor in a Drama Series."
FAMILY RELATIONSHIPS・3 DAYS AGO
Amomama

Sidney Poitier is a Bahamian-American actor who's also a film director and an author. The famous star was married twice to two different women, and with them, he shares six beautiful kids. Sidney Poitier was born on February 20, 1927, in Miami, Florida. He was born prematurely while his parents...
NEW YORK CITY, NY・2 DAYS AGO
Amomama

Being a celebrity sometimes means being rich and famous, and often, close relatives would no longer have to concern themselves with money problems. However, there are some stars who refused to share their wealth with their children. Being the child of a celebrity comes with untold privileges from paparazzi to...
FAMILY RELATIONSHIPS・1 DAY AGO
Amomama

Hollywood icon Brian Keith entertained the world for over 35 years before dying of suicide following a series of tragic events unfolding in his life. Born in Bayonne, New Jersey, as Robert Brian Keith Jr. on November 14, 1921, Brian Keith became a star. He was the son of character actor Robert Keith, and he made his debut in movies at the young age of three in 1924’s “Pied Piper Malone.”
BAYONNE, NJ・2 DAYS AGO

Andy Griffith was a charming actor, and his works were widely appreciated, but behind the scenes, there happened to be some real shenanigans going on, which included his affair. “The Andy Griffith Show” was widely watched in the years that it aired, and so was the popularity of its lead...
RELATIONSHIPS・11 DAYS AGO
Closer Weekly

Jane Powell Was a Bride 5 Times: Meet the Late Star’s Husband Dickie Moore and Other Ex-Spouses

Jane Powell made her claim to fame as a Hollywood actress in films like Seven Brides for Seven Brothers and Royal Wedding, but in real life, she was a bride five times. Aside from her latest marriage with husband Dickie Moore, the beloved late star had four ex-spouses, including Geary Steffen, Patrick Nerney and more.
CELEBRITIES・2 DAYS AGO
goodhousekeeping.com

Kevin Costner doesn't say much on Instagram, but when he does, his fans pay attention. The 66-year-old actor portrays Yellowstone patriarch John Dutton, a stoic rancher who will stop at nothing to protect his land and his family. At the end of season 3, John's fate lies in the balance after being shot on the side of the road.
MOVIES・2 DAYS AGO
Closer Weekly

Barbra Streisand Loves to Spoil Her Grandkids! Inside the Film Icon’s Life as a Grandma of 4

Barbra Streisand spent the last few decades traveling the globe as an iconic singer and actress, starring in Hollywood classics like Funny Girl, Yentl and The Way We Were. These days, though, she’s relishing her role as a doting grandma to her four grandchildren, Trevor, Eden, Westlyn and Chapel. Barbra...
FAMILY RELATIONSHIPS・17 DAYS AGO

Hollywood Star Eric Christian Olsen is the proud father of three beautiful children. Get to Know Them

When “NCIS: Los Angeles” star Eric Christian Olsen became a father, he never knew he would become such a “softie” because of his children. Today, however, he’s a caring dad to his three children.
FAMILY RELATIONSHIPS・1 DAY AGO
The Hollywood Reporter

Michael Nader, ‘All My Children’ and ‘Dynasty’ Actor, Dies at 76

Michael Nader, an actor known for All My Children and Dynasty, has died, The Hollywood Reporter has confirmed with his representative. He was 76. Nader’s wife Jodi Lister gave the following statement to MFTV: “With heavy heart, I’m sharing the news of the passing of my beloved, Michael. We had 18 wonderful years together with the many dogs we fostered and adopted.” She continued, “Recently, Michael was so thrilled to reconnect with his friends from the cast of Dynasty during Emma Samms virtual event to help raise funds for Long-Covid research. Michael was working on a book about his life and addiction...
CELEBRITIES・25 DAYS AGO
centralrecorder.com

‘The Bodyguard,’ starring Kevin Costner and Whitney Houston, is having a remake.

The movie that helped catapult Whitney Houston into being an international icon is getting a remake. In 1992, Houston achieved worldwide fame thanks to starring as Rachel Marron alongside Kevin Costner as Frank Farmer in Warner Bros. Studios’, The Bodyguard. Houston played the role of a pop star who is being stalked and manipulated by a fan. To protect herself, she turns to Costner’s bodyguard character. The two of them fall in love, despite Costner’s difficulties.
MOVIES・17 HOURS AGO
wivk.com

The David S. Palmer Arena has announced their location as one of the few select dates that will be added to Kevin Costner & Modern West’s: 2021 Tales From Yellowstone Tour; on Wednesday, October 27th. The tour will feature songs from the album: Tales From Yellowstone. The album was released...
DANVILLE, IL・12 DAYS AGO
Florida Times-Union

If you book it, they will come. Actor Kevin Costner is taking a little time away from the camera to go on tour with his Americana band, Modern West. The band's tour includes a stop at the St. Augustine Amphitheatre on Oct. 25. Costner formed the band in 2007 and...
SAINT AUGUSTINE, FL・10 DAYS AGO
Fox5 KVVU

Kevin Costner & his band to perform in Henderson

Kevin Costner and his band will be in Danville next month

Kevin Costner and Modern West are bringing their Tales from Yellowstone 2021 tour to David S. Palmer Arena on October 27th. Doors open at 6 p.m., and the show begins at 7 p.m. From the press release:. The tour will feature songs from the album: Tales From Yellowstone. The album...
DANVILLE, IL・12 DAYS AGO
Journal & Topics

Children of celebrities who followed in their famous parents' footsteps

In "The Many Saints of Newark," James Gandolfini's son, Michael, plays a younger version of Tony Soprano.
NFL・1 DAY AGO
Amomama

“Wheel of Fortune” host Pat Sajak mostly keeps his family away from the spotlight, but he has enjoyed a three-decade marriage to his second wife Lesly Brown, with whom he shares a daughter and a son who are now both adults. The actor and game show host has fronted the...
FAMILY RELATIONSHIPS・13 DAYS AGO