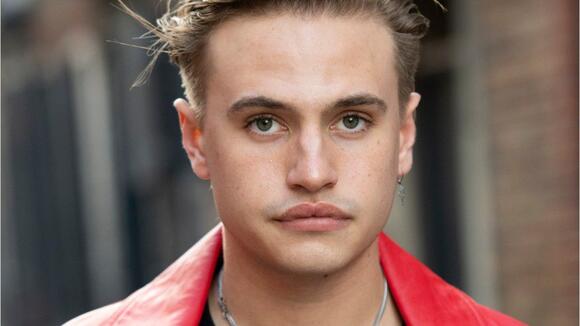 A cause of death has not been disclosed.

“My heart is shattered & to write this feels so wrong and I don’t even know what to say. Yesterday I lost my brother, best friend & the other half of my heart,” Meredith Mickelson captioned a throwback photo of her and her brother on Instagram, confirming his death.

“There wasn’t a person I loved more on this earth. there’s no words that can do him justice that i could write. to know him was to love him. He was the happiest brightest smiley most sunshine human to exist and I’m so happy God chose me to be his sister for his whole amazing life,” she added.

Daniel Mickelson - an Atlanta native best known for his role in the web series “Mani” and the 2019 indie comedy “The Killer Clown Meets the Candy Man” - launched a fashion brand and clothing line called “Kids Back Home” in January, Deadline reported.

Celebrities sharing their condolences under Meredith Mickelson’s post included both Patrick Schwarzenegger and Jordyn Woods, who each wrote, “Praying for you,” and model Amelia Hamlin, who wrote, “I love you forever Daniel,” People reported.

Meanwhile, Paris Hilton shared her own photo of Daniel Mickelson hugging her on her Instagram Story and reposted a video featuring them both.

“You were such a light,” Hilton wrote.

According to Deadline, Daniel Mickelson’s girlfriend, Maddie Haley, wrote on Instagram, “I wish my plans to spend the rest of my life with you weren’t stripped away from me like this. I wish I could tell you how much I love you and I wish I got the chance to say goodbye. I’m not sure how I’m going to get through this but I’m going to be strong for you because I know it’s what you would have wanted.”

Look can anybody just say they pray for the family and be done with it. Always trying to figure out how they died. It don't matter he is gone people are hurt. My heart goes out to this family totally. May God help you all get through this. 🙏

I've never heard of this Daniel job for. just because I haven't heard of him doesn't mean he wasn't famous to some people just not to me. 23 years old is way too young to go

I don't know anyone they named except Paris Hilton. If he was involved with her, then it was probably drugs. Prayers for the family anyway.

Anthony “A.J.” Johnson, a comedian and actor best known for his roles in “Friday” and “Menace II Society,” has died, according to multiple reports. He was 55. In a statement obtained by The Hollywood Reporter, Johnson’s representative, LyNea Bell, confirmed his death Monday. “We lost an icon,” Bell said. “He...
CELEBRITIES・1 DAY AGO
ComicBook

Willie Garson, a prolific character actor best known for his role as Stanford Blatch in the Sex and the City franchise, has passed away at the age of 57. The news was first broken in a tweet by actor Rob Morrow, and has since been confirmed by Garson's family (via TVLine). The cause of death is currently unknown at this time, although TMZ reports that the actor had been battling cancer. Garson's career spanned four decades, and also included memorable roles as Mozzie in White Collar, Ralph in Little Manhattan, Martin Lloyd in Stargate SG-1, and Gerald Hirsch on Hawaii Five-0.
TV & VIDEOS・7 HOURS AGO
bravotv.com

Noelle Robinson Shares an Update on Her Life in L.A.

Noelle Robinson is sharing an update on her life in Los Angeles. The Real Housewives of Atlanta daughter, who moved into a new “dream apartment” in the city last month, recently took to Instagram to open up about how things are going for her in California. On September 10, Noelle...
LOS ANGELES, CA・9 DAYS AGO
Amomama

Last year was filled with tragic events for American singer Bobby Brown and his family. However, this year appears to be filled with happy moments, and the singer's wife, Alicia Etheredge, showed that in a recent Instagram post. Bobby Brown's music legacy goes way back to the '90s when he...
CELEBRITIES・24 DAYS AGO

Angela Bassett shared picks of her new wax figure with fans on social media and it looks so real that many can't tell who is who!
CELEBRITIES・3 DAYS AGO
AOL Corp

Simply stunning! Christina Haack confirmed her engagement to Joshua Hall on Monday, September 20 — and she’s already started showing off her beautiful bauble. The 38-year-old Flip or Flop star shared images with her hubby-to-be via Instagram and gave her followers a peek at her at the massive rock on her left hand.
CELEBRITIES・1 DAY AGO
ETOnline.com

Michael Constantine, known for his role as Gus in My Big Fat Greek Wedding, has died. He was 94. The beloved actor died on August 31 of natural causes, Constantine's agent confirmed the news to multiple outlets on Wednesday. The Nia Vardalos-written romantic comedy -- which is the highest-grossing rom-com of all time -- was released in 2002, with Constantine making audiences laugh and smile as the Portokalos patriarch. He reprised his role as the Windex-toting father in the sequel, My Big Fat Greek Wedding 2, as well as the short-lived CBS series, My Big Fat Greek Life.
CELEBRITIES・13 DAYS AGO
kisswtlz.com

Actor Michael K. Williams, Omar on ‘The Wire,’ dead at 54

FILE - In this Saturday, July 30, 2016, file photo, Michael Kenneth Williams, a cast member in the HBO series "The Night Of," poses for a portrait during the 2016 Television Critics Association Summer Press Tour at the Beverly Hilton in Beverly Hills, Calif. Williams, who played the beloved character Omar Little on “The Wire,” has died. New York City police say Williams was found dead Monday, Sept. 6, 2021, at his apartment in Brooklyn. He was 54. (Photo by Chris Pizzello/Invision/AP, File)
NEW YORK CITY, NY・14 DAYS AGO

Actor Art Metrano, who was the butt of jokes as the pompous Officer Ernie Mauser in two “Police Academy” movies, died Wednesday. He was 84. Metrano died at his Aventura, Florida, home of natural causes, his son told the Miami Herald. Harry Metrano also revealed the news of his father’s...
AVENTURA, FL・10 DAYS AGO
arcamax.com

Daniel Craig has called for roles "just as good as James Bond" for women and actors of colour. The 53-year-old star is to play 007 for a final time in forthcoming film 'No Time To Die', but he has shot down suggestions that a woman could take over from him, as he believes "better parts" should be created for actresses instead.
CELEBRITIES・1 DAY AGO
The US Sun

WENDY Williams' brother Tommy gave fans a heartbreaking update on her condition as she suffers from a severe case of Covid after being rushed to the hospital for "psychiatric issues." The Wendy Williams Show host has been forced to push back her season premiere until October as she fights ongoing...
NEW YORK CITY, NY・4 DAYS AGO
hotspotatl.com

Megan Thee Stallion is sending out reminders to the haters that she got bars. The Houston rapper decided to address her haters who feel all she can do is shake some ass with her new freestyle aptly titled “Tuned In,” clearly because they love watching her every single move. In...
CELEBRITIES・29 DAYS AGO

Tamar Braxton Unveils Botched Plastic Surgery In New TikTok Video. Tamar Braxton looks like a whole different person. The superstar singer/tv star removed her makeup and revealed her new face to fans – after undergoing an unspecified surgical procedure. However,, fans were not impressed and, in fact, were disturbed by...
BEHIND VIRAL VIDEOS・24 DAYS AGO
HipHopWired

Cardi B has been vocal about her many cosmetic procedures — which included teeth veneers, liposuction and another breast augmentation after the 2019 birth of her daughter, Kulture. She also admitted to getting cheek fillers, eye adjustments and a nose job. Now, she’s undergone another procedure, which has made her...
BEAUTY & FASHION・16 DAYS AGO
In Style

Jennifer Garner Wore Extremely Controversial Jeans, and They're on Sale at Nordstrom

Welcome to the new Look of the Day, where we comb through every celebrity outfit from the past 24 hours and feature the single most conversation-worthy ensemble. Love it, leave it, or shop the whole thing below. Each product we feature has been independently selected and reviewed by our editorial...
APPAREL・19 DAYS AGO
deseret.com

Gabby Petito’s father said he didn’t see any “red flags” from Petito’s boyfriend, Brian Laundrie, before the couple went off on a road trip. Petito, a 22-year-old from Long Island, has gone missing in recent days. She was first reported missing on Sept. 11. She did not return home from a road trip with her boyfriend, Brian Laundrie. The two spent weeks in Utah, visiting Mystic Hot Springs and Bryce Canyon, Canyonlands and Arches national parks, among other locations.
RELATIONSHIPS・6 DAYS AGO
dreddsinfo.com

Robin Roberts has enjoyed a much-deserved break from Good Morning America with her long-term partner Amber Laign. What's more, on Sunday, Amber marked her birthday, and her famous girlfriend made sure that it was extra special. Taking to Instagram, the GMA star shared a lovely photo of the pair posing...
CELEBRITIES・15 DAYS AGO
Hello Magazine

Beyoncé is notoriously private when it comes to her family life but delighted fans on Monday after sharing a rare photo with her youngest daughter Rumi. The Black Parade hitmaker took to Instagram to share a series of snapshots from her vacation, and it looked liked they were having the best time!
CELEBRITIES・8 DAYS AGO