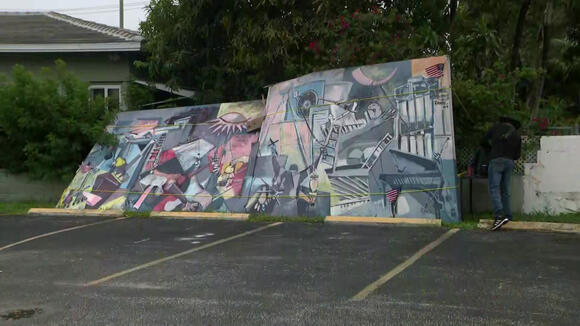 SURFSIDE (CBSMiami) – A newly created mural in Surfside pays tribute to the victims of the tragic condo collapse and the first responders who are working around the clock on the pile where the Champlain Towers South once stood.

The artist, Roberto Marquez, is from Dallas, Texas and he came to Surfside just to paint it as a way to show that goodness can come from tragedy.

“Here we have a firefighter, what I consider a firefighter rescue. And there’s fire by the building,” explained Marquez while describing to mural.

Marquez arrived in Surfside five days ago saying he just had to be here to work on the painting which memoralizes the victims and honors the first responders who have been working tirelessly to recover the bodies of those lost in the collapse.

“I said I needed to go, this is like a duty for me. You know, I had to I had to help,” said Marquez.

The artist told CBS4 News he has painted similar murals at the sites of other tragedies including following the deaths of George Floyd and Jacob Blake, and has also painted works in Tijuana for migrants, and in Cuba.

“Sometimes be applying so much pain that you know, yes, be there, you know, to let them know, hey, here I am. You’re not alone.”

Marquez isn’t the only one who believes art can help heal a community.

“I think that’s outstanding. I think that’s beautiful. I think it shows the people’s love for the culture of the community,” said one woman while admiring the artwork.

Another said, “I know this is going to be a great message for everyone that is suffering from this tragedy.”

Marquez says he hopes to auction off the mural and donate all proceeds to a victims fund for families.

MIAMI (CBSMiami/AP) — Residents of a Surfside apartment complex, owned by the city’s mayor, have been told they have 45 days to vacate the building so extensive repairs can be made. The move comes on the heels of the deadly Champlain Towers South collapse in June that killed 98 people.
SURFSIDE, FL・13 DAYS AGO
Miami Herald

Remembering the victims of the Surfside tower collapse

They ranged in age from 1 to 92, spoke a cacophony of languages and hailed from everywhere. They were émigrés fleeing repressive regimes, retirees seeking repose and newlyweds embarking on new lives. They had found their place in the sun, Surfside’s Champlain Towers South. And then, the unthinkable. Here are the 98 people lost in the collapse on June 24, 2021.
SURFSIDE, FL・5 DAYS AGO
CBS Miami

MIAMI (CBSMiami) – Families of Surfside victims held a news conference Thursday afternoon to push for a permanent memorial at the site of the condo collapse. One by one they came up to the microphone and said they did not want another building to be built on what they consider hallowed ground. “We don’t build over dead people,” was their cry. Three months after the Surfside disaster, the people who lost loved ones stood feet from the site and pledged to build a memorial on the site. “This spot is sacred. It shouldn’t be anything other than a memorial,” said Ronit Felszer whose 21-year-old son was...
SURFSIDE, FL・4 HOURS AGO

In 2001, Dave Downey was working in special operations for Miami-Dade Fire Rescue when FEMA called them to respond to the scene at Ground Zero in New York City. After he had retired as chief, Downey responded to the condo tower collapse in Surfside, FL. Each tragedy was a rare moment where a large fire department needed help from all over – sifting through the rubble looking for air pockets where survivors and victims might be.
FLORIDA STATE・13 DAYS AGO
Miami Herald

In the hours, days and weeks after the Champlain Towers collapsed, killing 98 people and displacing hundreds, South Florida — and beyond — stepped up in a big way to help the victims. “The tragedy in Surfside spoke to so many people around the world, our first donation came in...
SURFSIDE, FL・4 DAYS AGO
Amomama

Mom-of-three, Isabel Castro, was furious when her son’s school stopped her from entering a meeting because of her low neckline top. Many schools around the world implement dress codes for students, but one school in Soledad, Colombia, also applied the rule to a parent. Isabel Castro shared what happened when...
LIFESTYLE・11 DAYS AGO
WSVN-TV

MIAMI (WSVN) - Surveillance video showed two women pouring a pot of used cooking oil from a restaurant down a storm drain in Miami. The pair could be seen going their separate ways after emptying the pot. The oil was dumped near Northeast Second Avenue and 29th Street. Officials said...
MIAMI, FL・6 DAYS AGO

CHICAGO (CBS) — A River North bouncer is facing a long recovery after he was shot last week because he wouldn’t let a man into a bar. As CBS 2’s Charlie De Mar reported, the bouncer’s coworkers were stepping up Wednesday night – wanting him to know he’s not alone. If you’ve gone out to a club sometime in the past two decades downtown, there is a good chance you’ve been greeted by Yai. He has been in the industry for a long time, and now he is battling after he was shot while doing his job. “He’s easily one of the industry’s...
CHICAGO, IL・13 HOURS AGO
Daily Mail

The brother of a woman charged with stealing the identities of at least seven victims of the Surfside condo collapse has become the fourth person arrested in the credit-card scam - in which the suspects allegedly purchased more than $45,000 worth of goods with credit cards in the victims' names.
PUBLIC SAFETY・13 DAYS AGO
CBS Chicago

CHICAGO (CBS) — A fire damaged a Bronzeville neighborhood building where R&B icon Bo Diddley once lived. The Fire Department said the blaze broke out Monday evening in the masonry-construction building at 4746 S. Langley Ave. No one was injured. 4746 Langley still and box fire. Now out. Masonry building residential. pic.twitter.com/KwGWOiy4TU — Chicago Fire Media (@CFDMedia) September 21, 2021 As recounted in a 2004 document by writer Dave Hoekstra, Bo Diddley – whose real name was Ellas Bates McDaniel – was born in McComb, Mississippi and moved to the Langley Avenue building with his family when he was 7 years old. Hoekstra...
CHICAGO, IL・2 DAYS AGO
CBS Miami

Hey, South Florida, Look Before You Sit! Beware Of Iguanas In The Toilet!

MIAMI (CBSMiami) – It just keeps happening!!  Unwelcome creatures in the toilet greeting unsuspecting people when they’re most vulnerable. “I saw that tail swirling around, I’m like, ‘Okay! That is not supposed to be there,’” said a terrified Michelle Bennett. She got the shock of a lifetime Monday morning when she got up at 5 a.m. and found a spiny tail iguana hanging out in her toilet. “I lifted the seat up and I saw the tail and I threw it back down. Then I started flushing the toilet trying to flush it out and it wouldn’t flush out,” she said. WATCH: Web Extra video...
FLORIDA STATE・1 DAY AGO

BURBANK (CBSLA) — Operations at Hollywood Burbank Airport were briefly disrupted after a person ran onto the airfield Wednesday morning. (credit: CBS) Airport officials say an “unauthorized individual entered the airfield” at about 11:50 a.m. Wednesday. The incident triggered the brief suspension of aircraft operations. The person was taken into custody within minutes, and airport operations resumed shortly after an inspection, officials said. The person was not identified, and it’s not clear if they will face criminal charges.
BURBANK, CA・1 DAY AGO
CBS Miami

Miami Beach Police Host Bone Marrow Registry Drive, Hope To Give Someone The ‘Gift Of Life’

MIAMI (CBSMiami) – The Miami Beach police department served as a backdrop for a bone marrow registry drive through Gift of Life. In the middle of it all, complete strangers are now bonded by blood. David Marder unselfishly gave 18-year-old Imir Ahmic the ‘gift of life’. They met each other for the first time. “I’m very proud of the man you’ve become,” Marder told Ahmic. Ahmic had a chronic granulomatous disease, or CGD, a very rare disease that affects the immune system. In its simplest form, CGD shuts down the immune system. A common cold could have been deadly for Ahmic. Years ago, Marder...
MIAMI BEACH, FL・4 HOURS AGO
NBC Connecticut

On Tuesday, Sept. 11, 2001, when a plane crashed into one of the world’s tallest buildings, word spread quickly — especially among first responders. “I remember getting a call from the Urban Search and Rescue Captain saying, hey, you guys gotta turn on the TV. One of the buildings at the World Trade Center got hit by a small plane,” former Miami-Dade Fire Rescue Chief Dave Downey said.
MIAMI, FL・14 DAYS AGO
NBC San Diego

On Tuesday, Sept. 11, 2001, when a plane crashed into one of the world’s tallest buildings, word spread quickly — especially among first responders. “I remember getting a call from the Urban Search and Rescue Captain saying, hey, you guys gotta turn on the TV. One of the buildings at the World Trade Center got hit by a small plane,” former Miami-Dade Fire Rescue Chief Dave Downey said.
MIAMI, FL・14 DAYS AGO

On Tuesday, Sept. 11, 2001, when a plane crashed into one of the world’s tallest buildings, word spread quickly — especially among first responders. “I remember getting a call from the Urban Search and Rescue Captain saying, hey, you guys gotta turn on the TV. One of the buildings at the World Trade Center got hit by a small plane,” former Miami-Dade Fire Rescue Chief Dave Downey said.
MIAMI, FL・14 DAYS AGO