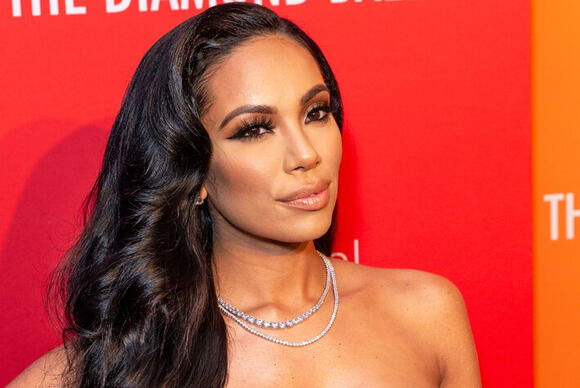 Kaylin used to star on the show and is the ex of rapper-turned-podcaster Joe Budden.

Erica gave birth to Safaree’s son just a week ago.

“@Kaylin_Garcia real talk I been in the shoes of dealing with a man who lived a double life and I had no clue he was married. But you ! Know Safaree is married,” the reality television star wrote on Instagram Story.

“Who don’t know that. Not to mention he real friends with Joe Budden your ex. Safaree just had a baby who he hasn’t seen in 4 days that’s in the NICU. That’s also no secret. I’m blasting both of you since he told you to lay low tonight–clearly you both know I found out y’all been f–king all weekend. My son not even a week old yet and he d–king you down. I hope this is something you proud of shorty. This man lost his whole family officially. I wish you both the best.”

Erica and Safaree split amid claims he was spotted cheating in a club. The pair have been on and off for months… although some think this drama could just be a ruse to pull in ratings for the next season of the show.

Kaylin responded to the claims, also on Instagram Story. She says she and Safaree are just friends.

“For years I have been to myself. No blogs, no drama. I am a women [sic] who is about accountability and morals. The fact that I have been called out for absolutely nothing to me is insane. Me and Safaree are friends and nothing more. Thanks! Everyone stay blessed. And let’s continue to spread love and light!”Kaylin wrote.

No doubt, Budden will address the drama on his podcast this week.

Yes, it’s true: ex and current spouses to the same partner can get along as seen in the trailer to an upcoming episode of Red Table Talk, a Facebook Watch series co-hosted by actress and wife to megastar Will Smith, Jada Pinkett Smith. In the trailer, Sheree Zampino, Smith’s...
CELEBRITIES・21 DAYS AGO
ABC7

Rapper Coolio, known for songs such as "Gangsta's Paradise" and "Fantastic Voyage," died in Los Angeles at the age of 59.
LOS ANGELES, CA・22 MINUTES AGO
Kath Lee

"Be careful. They're the same." A guy breaks-up his girlfriend after 3 weeks of dating. Thanks to her father

"As we experience life, our brain begins to develop a sixth sense. Many times, we choose to ignore what we know to be true. Trusting your "gut" when you see red flags is one of the most important things that you can do for your emotional and physical health." – Aaron Horn LMFT.
7 HOURS AGO
Shine My Crown

The Real Housewives of Atlanta star Porsha Williams has remained relatively silent about wedding plans since revealing she became engaged to investor Simon Guobadia in May 2021. But in a recent Instagram post, she may have confirmed that she and her “hubby” are already married. “When the husband...
CELEBRITIES・23 DAYS AGO

Hayden Panettiere is looking back on the “heartbreaking” moment she relinquished custody of her daughter, Kaya, to Wladimir Klitschko amid her addiction struggles. The “Nashville” alum told Jada Pinkett Smith, Adrienne Banfield-Norris and Kelly Osbourne on “Red Table Talk” that the decision “wasn’t a discussion.” Panettiere, 33, claimed in a sneak peek of Wednesday’s episode, obtained by People, that her ex-fiancé did not “come to” her and share his reasoning for why “it would be good for” Kaya to live with him. “If he had … I would’ve said, ‘OK, that makes sense, I get it, I’ll come there to visit and stuff...
CELEBRITIES・1 DAY AGO
The Independent

Victoria Beckham has seemingly removed her tattoo of her husband David Beckham’s initials.In a recent video posted to her Instagram, the 48-year-old fashion designer showed off a new red lip product from Victoria Beckham Beauty by swatching it on her arm. However, as the camera focused on her arm, viewers noticed that the tattoo of her spouse’s initials written in script could be seen heavily faded, with Beckham seemingly in the process of getting the initals “DB” removed from her wrist.While Beckham has not publicly addressed the tattoo removal, fans asked about the fading of the ink in the...
CELEBRITIES・47 MINUTES AGO
The Independent

Lara Trump has sparked anger and concern after posting a video of her five-year-old son driving his toy car outside in the midst of heavy rain from Hurricane Ian.The 39-year-old TV producer, who lives in Florida with her husband Eric Trump, shared the video to her Instagram on Wednesday of the couple’s son Eric Luke Trump. Trump and her spouse also share three-year-old daughter Carolina Dorothy Trump.In the video, Trump’s son, who goes by the name Luke, could be seen driving his toy car in the middle of the street as rain from the Category four storm poured down....
FLORIDA STATE・42 MINUTES AGO
Shine My Crown

It appears no one looped Stacey Dash in when legendary Yonkers rapper, DMX, died last year. In a TikTok video she uploaded to her account Wednesday, the Clueless star is seen teary-eyed over his death. “I’m ashamed I didn’t know. I didn’t know DMX died, I didn’t know.”
CELEBRITIES・27 DAYS AGO

Social media influencer Kiara Moore and her BFF finally took that long-needed girls trip and ended up having dinner with rap icon, Nas. While vacationing in Turks and Caicos, Moore posted a video on TikTok of her friend being served cake during her birthday dinner. While singing happy birthday, Nas, who was seated at a table near them, raised a glass and made a toast. Moments later, he approached their table and had drinks with the ladies.
CELEBRITIES・22 DAYS AGO