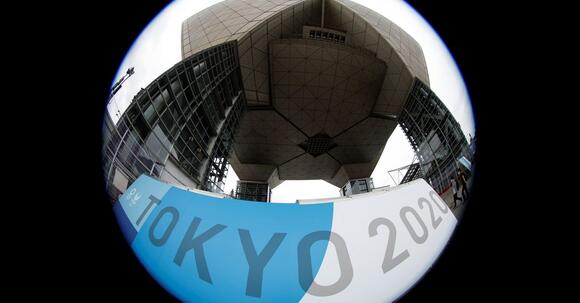 BEIJING, July 6 (Reuters) - China is expected to send more than 400 athletes to the Tokyo Olympic Games, Chinese state media reported on Tuesday, on track to renew a record set at Rio 2016 despite a coronavirus pandemic that has already delayed the Games by a year.

The Games are set to open on July 23 in the face of worries that an influx of tens of thousands of people from around the world could trigger another wave of infections. read more

But China's men's basketball team failed to qualify for the Olympics - a first in 37 years.

Games organisers have banned spectators from overseas and set a cap on domestic spectators at 50% of capacity, up to 10,000 people.

Japan has not had the explosive COVID-19 outbreaks seen elsewhere, but has recorded over 800,000 cases and more than 14,800 deaths.

Only a quarter of its population has had at least one vaccination shot after an initially slow rollout.

Russia and China's deepening ties have worried US officials, but some say Moscow should be worried about its increasingly powerful partner.
POLITICS・23 HOURS AGO
globalvoices.org

As the Taliban removed ethnic Uyghur militants from the border zone between Afghanistan and China, observers said there could be a revived policy coordination between the new leadership in Kabul and the Communist Party in Beijing. According to a UN report, there are 500 Uyghur militants among the Taliban. If...
POLITICS・9 HOURS AGO
Washington Post

At the U.S. Olympic trials in June, Kayla DiCello slipped from the bars during perhaps the most important competition of her career, effectively dashing her hopes of making the team for Tokyo. The 17-year-old still traveled to the Tokyo Olympics as an alternate but then returned home to Boyds, Md., and began preparing for her next opportunity at the world championships. This time, with the U.S. Olympians not vying for selection, DiCello emerged as one of the country’s top contenders, so she headed to Kitakyushu, Japan, to take part in a competition of this magnitude for the first time.
SPORTS・5 DAYS AGO
teamusa.org

U.S. Gymnasts Head Back To Japan, This Time For Worlds

Leanne Wong competes on the balance beam during the women's competition at the 2021 U.S. Gymnastics Olympic Trials on June 27, 2021 in St Louis. Leanne Wong had only been in Tokyo a few days when her Olympic experience was turned upside down. As one of four traveling alternates to...
WORLD・9 DAYS AGO

Japan’s Hitomi Hatakeda pulled out of the women’s all-around final at the 2021 World Artistic Gymnastics Championships after the 21-year-old suffered a serious spinal injury during a training fall, the Japan Gymnastics Association said. Hatakeda, who appeared at the Tokyo Olympics, injured her spine while training on the uneven bars...
SPORTS・5 DAYS AGO
Birmingham Star

Beijing [China], October 23 (ANI): China faces growing opposition to the 2022 Winter Olympics on account of a dismal human rights record, particularly in the Xinjiang region against the Uyghur Muslims, said a Canada-based think tank. The Olympic flame for the 2022 Winter Olympics in Beijing is officially ignited in...
SPORTS・3 DAYS AGO
Sports Illustrated

Leanne Wong and Kayla DiCello brought home silver and bronze medals in the all-around while Stephen Nedoroscik became the first American to win a world title on pommel horse.
SPORTS・2 DAYS AGO
BGR.com

Sketchy seeds from China in the mail finally explained

Don't Miss: Amazon’s epic Black Friday deals started early this year and you won’t believe how good they are! Mysterious seeds from China have been shipped to Americans in all 50 states, an investigation discovered. The recipients got various types of seeds, some of them being harmless, common seeds that one might plant in their garden. Others were harmful to the soil. The mystery appears to have been a vast scam targeting people whose online accounts have been compromised. The novel coronavirus pandemic was undoubtedly the biggest and scariest situation of 2020, but it’s hardly the strangest thing that happened last year. Thousands of...
AGRICULTURE・7 HOURS AGO

A Virus has arrived which is 70% deadlier than COVID-19.

At the time of the deadly COVID -19, several cases of another virus which is 70% more dealy than COVID-19, were reported. On Sunday, the Southern Indian state known as Kerala is reported the death of a 12-year-old kid from the extremely rare Nipah virus.
3 HOURS AGO
Business Insider

The Pentagon has denied accusations of a cover-up, pointing to public comments and a press statement on the incident.
POLITICS・3 HOURS AGO
torquenews.com

Tesla's sales numbers for the month of September have been released by China Passenger Car Association. Once again the EV maker has posted a record delivery number. Tesla is in the process of massively expanding the company’s production capacity. According to the EV maker’s Battery Day presentation, Tesla plans to produce 20 million vehicles a year by 2030.
ECONOMY・14 DAYS AGO
wkzo.com

BUCHAREST (Reuters) – Romania reported a fresh daily record of COVID-19 infections of 18,863 cases on Tuesday, and 574 deaths, a record high number since the start of the pandemic, the government said on Tuesday. It said it processed a number of 81,054 tests over the past 24 hours. More...
WORLD・7 DAYS AGO
NBC News

MOSCOW — Russia is reporting its largest daily number of new coronavirus infections, more than 70 percent up on the number a month ago as the country faces a sustained rise in cases. The national coronavirus task force on Sunday said 34,303 new infections were recorded in the previous day,...
PUBLIC HEALTH・9 DAYS AGO
albuquerqueexpress.com

Lausanne [Switzerland], October 17 (ANI): The Executive Board (EB) of the International Olympic Committee (IOC) has approved a list of 17 athletes (a record number for the Olympic Winter Games) covering all five continents, who have proposed their candidatures for the IOC Athletes' Commission (AC) election that will take place at the upcoming Games in Beijing.
SPORTS・9 DAYS AGO
une.edu

Wayne Lamarre, M.Ed., clinical professor and director of UNE’s Master of Science in Athletic Training program, has been selected to join the medical staff as an athletic trainer (AT) for the U.S. Women's National Ice Hockey Team during the Winter Olympics in Beijing, China in February. “It is an incredible...
BIDDEFORD, ME・14 DAYS AGO
AFP

Tens of thousands of people in northern China were under strict stay-at-home orders on Monday as authorities sought to stamp out a growing Covid outbreak in the run-up to the Beijing Winter Olympics. Officials in the Chinese capital also restricted access to tourist sites and advised residents not to leave the city unless necessary, although regular transport services continued as normal. China reported 39 new cases on Monday, bringing the tally from the latest Delta variant-linked outbreak to more than 100 cases over the past week. The numbers are extremely low compared with most places in the world, but China has pursued a zero-case strategy throughout the pandemic and authorities are determined to subdue the latest outbreak with the Winter Olympics just over 100 days away.
PUBLIC HEALTH・1 DAY AGO
kfgo.com

BEIJING (Reuters) – China lit its Olympic flame on Wednesday after the arrival of the ceremonial torch from Athens, ahead of Beijing’s hosting of the 2022 Winter Games in February. Beijing will host the Winter Games from Feb. 4 to Feb. 20, becoming the first city to host both the...
SPORTS・6 DAYS AGO
Reuters

MOSCOW, Oct 22 (Reuters) - Moscow mayor Sergei Sobyanin expects COVID-19 infections to hit new records in the Russian capital either at the end of this week or early next week, the Interfax news agency quoted him as saying on Friday. Moscow will reimpose a partial lockdown from Oct. 28,...
GROCERY & SUPERMAKET・4 DAYS AGO