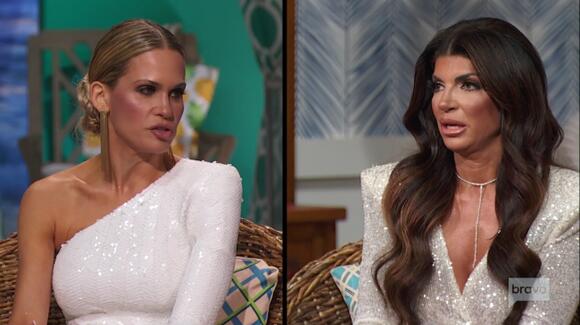 At the beginning of Season 11 of the Real Housewives of New Jersey, it seemed as though Teresa Giudice and Jackie Goldschneider would never be friends. Let’s get this straight — Jackie started as a fan , while Tre is the queen B of RHONJ. And Jackie was coming for her, and we all know what can happen when you try to go against Teresa and her four dorters. The analogy heard around the world was seemingly the nail in the coffin. But then, shockingly, Tre showed some growth . Just a little, but a lot for her.

By the RHONJ reunion , the two made up and even made plans to go on a double date. Yes, Evan Goldschneider was opening to hanging with the woman who spread rumors about him cheating on Jackie . That takes being a bigger person , and Tre looks like she may actually be learning a thing or two about accountability. Hell has frozen over.

And in an internet-breaking moment over the weekend, the two made their reconciliation Instagram official. Both women posted a photo with each other playing tennis. Tre wrote, “Baby got back hand” under her photo while Jackie captioned hers “Bad bitches play tennis.” So despite all of the bad blood throughout Jackie’s time on RHONJ , they actually seem to be making strides. And fans in both their comment sections were in disbelief. “I’m so confused.” “I’m shook.” “OMG WHAT.” “This is SHOCKING lol.” And those are just a handful of reactions.

And the photo begs the question that if Jackie and Tre make up, how is that going to play out in Season 12? We know filming is underway and the core group of ladies appear to be making a return. And even though Jackie and Tre are cool now, Jennifer Aydin has quite a lot of work to do in her friend group. Her contentious feuds with Margaret Josephs and Melissa Gorga reached a record-breaking low. And if Tre and Jackie team up, who will be there to encourage Jen to stir the pot at group gatherings ? Definitely not Dolores Catania.

RELATED: Teresa Giudice May “Forgive But Will Never Forget” Jackie Goldschneider For Analogy; Claims She’s “Not A Troublemaker”

And fans in the comments seemed to agree. “Please don’t turn against Jennifer ,” a viewer commented to Teresa . While other die-hard Tre Huggers (who remember Jackie’s behavior last season ) continued to slam her. “Teresa always has time for her fans,” one viewer wrote. “Tre is just so charitable, huh?” said another. BLOOP. Tre Huggers are a lot of things, especially being skillful shade-throwers.

While some people were not fans of the duo posting a photo, with some even calling it the “fakest post ever,” others were happy to see the two make-up. “So happy to see you two together,” one fan wrote. “If this can happen, then there is hope for Israel and Palestine,” said another. To be fair, Jackie definitely received more positive reactions to this post than when she hung out with Rick Leventhal and Kelly Dodd in the Hamptons. But that’s pretttty self-explanatory considering the FIRED Real Housewives of Orange County star’s track record.

TELL US – WHAT DO YOU THINK ABOUT JACKIE AND TERESA HANGING OUT? DO YOU THINK THEIR NEWFOUND FRIENDSHIP WILL LAST THROUGHOUT SEASON 12?

Erika Jayne’s news today is extensive. The reality star is currently at war with most of her followers RHOBH They are co-stars. They are not friends, so it will be a fun reunion. Also, she’s close to quitting the Bravo show. Still, it’s hard to believe since it’s her only...
TV & VIDEOS・4 DAYS AGO
Page Six

Kelly Dodd has a new nickname for Heather “Fancy Pants” Dubrow: “Pretentious bitch.”. The former star of “The Real Housewives of Orange County,” 45, takes aim at her former co-star in the premiere episode of her new podcast, “Rick & Kelly Unmasked,” on Patreon. Dodd claims in an exclusive sneak...
CELEBRITIES・25 DAYS AGO
Reality Tea

Real Housewives of Atlanta star Kenya Moore dished to Entertainment Tonight recently, on Peacock’s highly anticipated spin off show Real Housewives Ultimate Girls Trip. Currently being touted as essentially a Housewives All Stars, we have big expectations, to say the least. On the cast dynamic, Kenya explained, “The girls were outstanding. Like, it was just, like – […] The post Kenya Moore Says There Was Drama Within First 20 Minutes Of Filming Real Housewives Spin-Off Show appeared first on Reality Tea.
TV & VIDEOS・4 DAYS AGO

We have some hot tea about the upcoming season of The Real Housewives of New Jersey and it involves a rift between Teresa Guidice and Margaret Josephs. It seems Teresa is getting a taste of her own medicine following last season when she spread a rumor about Jackie Goldschneider’s husband.
TV & VIDEOS・10 DAYS AGO
International Business Times

Joe Giudice is badly missing his daughters with ex-wife Teresa Giudice based on his latest series of posts on social media. The 49-year-old former reality star and entrepreneur recently took to Instagram to share several throwback photos of his kids, particularly ones that feature his eldest daughter, Gia, 20, and second daughter, Gabriella, 17.
CELEBRITIES・12 DAYS AGO
E! News

Watch: Lisa Rinna Reveals Thoughts on Whether Erika Jayne Knew Anything. The Real Housewives of Beverly Hills fans will get answers during the franchise's most explosive reunion yet, thanks to Erika Jayne being an open book. According to Bravo host Andy Cohen, the "Pretty Mess" author doesn't hold back in...
CELEBRITIES・5 DAYS AGO
Reality Tea

Bravo has truly been gifting us with GOLD lately, maybe to make up for the trainwreck that was this season of the Real Housewives of New York. Real Housewives of Potomac is killing it, as always. Real Housewives of Beverly Hills is having its most explosive season in years. And we’re gearing up for the […] The post Melissa Gorga Says She Supports Teresa Giudice And Luis Ruelas’ Relationship Despite Rumors About His Past appeared first on Reality Tea.
BEVERLY HILLS, CA・8 DAYS AGO

As Bravo fans, we might not agree on everything, but the one thing that Bravoholics around the world can agree upon is the overwhelming feeling of excitement about Peacock’s Real Housewives Ultimate Girls Trip. While the title doesn’t necessarily roll off the tongue, a mash-up of fan-favorite Housewives from across the Bravo universe is exactly what the […] The post Monique Samuels Says She Turned Down Offer For Real Housewives Spin-Off Show appeared first on Reality Tea.
TV SERIES・9 DAYS AGO
Vulture

The Real Housewives of Beverly Hills Recap: Who Let the Conchs Out?

This week on our favorite show, Rich Women Doing Things, the rich women did things. They go to an auction preview and buy $4,800 Cartier rings on a whim, like when I stop by the bodega for a Magnum bar on the walk home on a hot night. They force their assistants to light about 900 candles on their front lawn for a dinner party as if people want to come eat on the set of a date on The Bachelor. And, of course, they threaten each other.
TV & VIDEOS・10 DAYS AGO
Reality Tea

Real Housewives of New York alum Bethenny Frankel always has a full plate. In March of 2021, Bethenny confirmed her engagement to Paul Bernon. She raised $1.5 million dollars in relief through her Bstrong: Disaster Relief foundation for victims of hurricane Ida. Season 13 of RHONY was a disaster for the franchise. While some viewers […] The post Bethenny Frankel Claims That Erika Jayne’s Husband Tom Girardi Owed $500K To Her Ex Dennis Shields appeared first on Reality Tea.
BEVERLY HILLS, CA・1 DAY AGO
centralrecorder.com

The Real Housewives of New JerseyThe cast teased the Season 12 cast trip, which is unlike anything the Garden State ladies have seen before. The cast will be heading to Nashville, TN this year for some good old-fashioned barbecue, whiskey, as well as mechanical bull fun. The cast has shared video and photo footage from their time in Nashville. A Twitter account also documented the experience. The Housewives Every move.
TV SHOWS・14 DAYS AGO

Teresa Giudice’s 12-year-old daughter, Audriana, raised eyebrows on Thursday when the youngster took to TikTok to share a sponsored post for Bloom Nutrition Greens & Superfoods supplements. The clip sees the youngest Giudice child — who has appeared on “The Real Housewives of New Jersey” since its 2009 premiere —...
BEHIND VIRAL VIDEOS・1 DAY AGO
inputmag.com

How technology made Bravo's 'Housewives' real

The old and the new, and the modern and the traditional, often stare one another in the face on reality TV, a genre and mode of television-making that roots itself both in the ostensibly banal of the everyday and the high emotions of orchestrated melodrama. It’s just in the way they do it.
TV & VIDEOS・10 DAYS AGO
Reality Tea

The Dinner Party From Hell Part 2 really lived up to its name. After many Real Housewives of Beverly Hills episodes watching the ladies tap dance around Erika Jayne and her tall tales, Sutton Stracke tried to confronted her. Well, sort of. Sutton was in an impossible situation. She didn’t believe Erika and some of […] The post Sutton Stracke Almost Quit Real Housewives Of Beverly Hills After Erika Jayne Lashed Out At Her appeared first on Reality Tea.
BEVERLY HILLS, CA・3 DAYS AGO