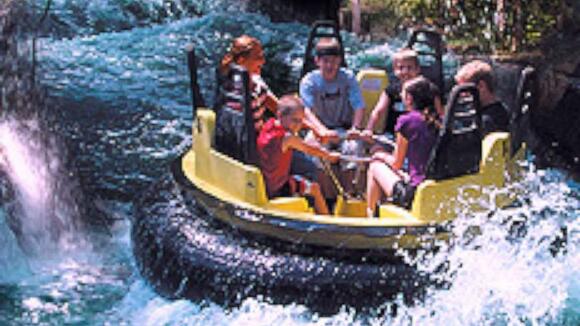 A boy is dead and another child is in critical condition after a raft overturned on a water ride at an amusement park.

The accident occurred at 7:35 p.m. local time on Saturday at Adventureland Park in Altoona, Iowa, when a boat on the Raging River ride overturned with six riders on it, according to a statement from the amusement park.

MORE: Man dies in fireworks accident after mortar shell explodes next to him

Three of the passengers were rushed to hospitals in critical condition while a fourth passenger suffered minor injuries, the Altoona Police Department said in a statement.

Eleven-year-old Michael Jaramillo died on Sunday as a result of his injuries, police said. Another juvenile was still in critical condition as of Monday afternoon, according to the police.

"Altoona Fire and Police were on the property and responded immediately," Adventureland Park in its initial statement on Saturday night. "We want to thank them as well as Des Moines, Ankeny, Bondurant, Pleasant Hill and Delaware Township Emergency Services for their fast response … Our thoughts are with the affected families at this time."

Adventureland Park said the ride had been inspected the day before and "was found to be in good working order" at the time of the accident. The Raging River ride will remain closed for more inspection.

The park released a second statement on Sunday night about the death of an injured rider.

"Adventureland is saddened to learn of the passing of one Guest involved in the Raging River accident on the evening of 7/3/21," the statement said. "This investigation is ongoing and the ride remains closed. Adventureland is working closely with both the State and local authorities, and would like to thank them again for their efforts. At this time, we ask for your thoughts and prayers for the Guest and their family, as well as for our team members who were onsite."

MORE: Elephant killed in zoo enclosure by another bull elephant who attacked him while he slept

This is reportedly not the first fatal accident to have taken place in connection with the Raging River ride at Adventureland Park.

According to the Des Moines Register , 68-year-old Adventureland Park employee Steve Booher died in 2016 while working on the ride. He was helping riders get out of the rafts at the end of the ride and fell onto the conveyor belt, suffering a fractured skull along with a major brain injury, the paper reported. Booher died four days later.

Iowa's Occupational Safety and Health Administration subsequently fined the theme park $4,500, according to the Des Moines Register -- the maximum the agency could assess for that type of violation.

An investigation into Saturday's incident is ongoing and the ride will remain closed during that time.

Condolences to the family. That poor baby. God cover that family. Cover the other injured ones. Pray the critical person makes a full recovery 🙏🏾

It’s hard for me to understand how this rather large floating thing could overturn. Very very tragic however a thorough investigation needs to be made.

I'll guess it wasn't a family with responsible people aboard the ride. I'll venture to say it was a bunch of youths acting like jerkoffs who proved Darwin's theory.

Sept 20 (Reuters) - FBI agents on Monday were seen entering the Florida home of the parents of Gabby Petito's fiance Brian Laundrie, as her family waited for official identification of remains found in a Wyoming national park, close to where the couple was last seen together while on a cross-country van trip.
PUBLIC SAFETY・4 HOURS AGO
The Associated Press

Pfizer said Monday its COVID-19 vaccine works for children ages 5 to 11 and that it will seek U.S. authorization for this age group soon — a key step toward beginning vaccinations for youngsters. The vaccine made by Pfizer and its German partner BioNTech already is available for anyone 12...
PUBLIC HEALTH・8 HOURS AGO
Reuters

KIGALI, Sept 20 (Reuters) - A Rwandan court on Monday sentenced Paul Rusesabagina, a one-time hotel manager portrayed as a hero in a Hollywood film about the 1994 genocide, to 25 years in prison after he was convicted of terrorism charges. Rusesabagina, 67, who was feted around the world after...
AFRICA・1 HOUR AGO
CNN

(CNN) — The FBI entered and searched the family home of Gabby Petito's fiancé Brian Laundrie in Florida on Monday, a day after investigators across the country found what they believe to be her remains. On Monday morning, FBI investigators searched Laundrie's parents' home in North Port as part of...
NORTH PORT, FL・12 HOURS AGO

WASHINGTON — The Biden administration will require all international travelers coming into the U.S. to be fully vaccinated against Covid as part of a new international air travel system. Starting in early November, foreign nationals flying into the U.S. will be required to be fully vaccinated and must show proof...
U.S. POLITICS・4 HOURS AGO
The Hill

Rep. Ilhan Omar (D-Minn.) is calling on Democratic leaders to disregard a recent ruling by the Senate parliamentarian disallowing prominent immigration reforms — a key element of the Democrats' $3.5 trillion domestic agenda — to be included in the massive package. The ruling by Senate Parliamentarian Elizabeth MacDonough, announced Sunday...
CONGRESS & COURTS・4 HOURS AGO
NBC News

MOSCOW — A gunman has killed at least six people and injured 28 at a university in central Russia on Monday, authorities said. The suspect was later detained, according to the Russian Interior Ministry. The death toll from the attack at Perm State University was confirmed by the Russian Investigative...
PUBLIC SAFETY・10 HOURS AGO
The Hill

A military plane crashed in a Texas residential neighborhood on Sunday morning, resulting in at least one person being taken to a hospital in critical condition and multiple homes being damaged. The cause of the crash during a training exercise is unknown, according to a statement from the Pentagon. The...
TEXAS STATE・23 HOURS AGO

LA PALMA, Spain, Sept 20 (Reuters) - Lava flowing from the Canary Islands' first volcanic eruption in 50 years has forced the evacuation of 5,500 people, destroyed at least 100 houses, and was expected to trigger toxic gases when it reaches the sea in the evening. The volcano erupted on...
ENVIRONMENT・3 HOURS AGO