W.Va. governor says only a 'catastrophe' will push unvaccinated Americans to get shot 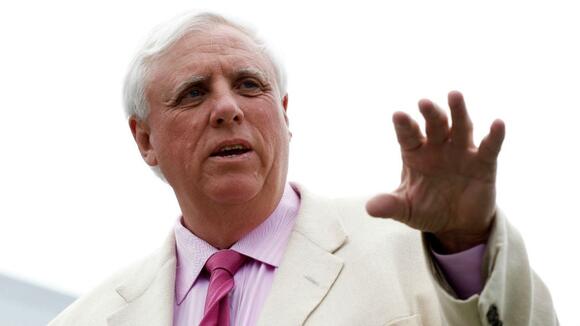 West Virginia Gov. Jim Justice (R) said Sunday that those who are still unvaccinated against COVID-19 will be pushed to get the shot only by a “catastrophe” in which “an awful lot of people die.”

On ABC’s “This Week,” host Martha Raddatz asked the governor what would push those who have not gotten vaccinated in the state “over the edge” to change their minds.

The governor, who in recent weeks has called on hesitant constituents to get the shot, responded, “I hate to say this, but what would put them over the edge is if an awful lot of people die.”

Justice said the “only way” he could see the nearly half of adults in West Virginia who have not yet gotten vaccinated alter their thinking would if be "a catastrophe" occurred "that none of us want."

The governor said that while the state has launched a lottery to give cash, guns, trucks and other prizes to people who have gotten vaccinated, another lottery is happening in his state in which people are gambling with their lives.

His remarks echo those he shared last month in which he said those choosing not to get the COVID-19 vaccine were “entering the death drawing.”

According to the Centers for Disease Control and Prevention, about 53 percent of residents ages 18 and older have gotten at least one dose of the COVID-19 shot, with just 45 percent fully vaccinated.

The U.S. overall was shy of President Biden 's goal heading into Sunday, with 67 percent of U.S. adults ages 18 and older with one shot and 58 percent fully vaccinated.

The Biden administration set an original vaccine goal of 70 percent of all Americans getting at least partially vaccinated by July 4.

Concerns about the highly transmissible delta variant have officials worried that more cases and deaths could undermine the country's efforts combating the virus.

In West Virginia, there have been more than 164,000 reported infections, with nearly 2,900 deaths as a result of the virus, according to the state health department.

I'm not getting vaccinated ever and I have congenital heart defect. The us government is not to be trusted and experts are not half as smart as they think they are. ultimately I will not defile my body with this my life and times are in Gods hands exclusively not man's.

I'm a student of science, and no. Anything that has a worse mortality rate than all vaccines in the country combined, and you have to sign a waiver which removes any liability of future side effects, when those side effects are unknown.. No. Why take the added risk if you will still get the virus? stop trying to force people to make a decision that may hurt them in the long run, and stop saying it is safe when the that is unknown due to the lack of data of extended testing.

amazing how establishment bigots are scared of something with a 99.99999997% survival rate with ZERO lasting effects for those under 50.

Colorado Governor Jared Polis cited the "impacts of inflation and the cost of living" as reasons for the tax rebate program.
COLORADO STATE・28 DAYS AGO
WashingtonExaminer

When President Joe Biden named Kamala Harris as his running mate, he promised his former campaign rival would be one of the most influential voices in the White House.
PRESIDENTIAL ELECTION・28 DAYS AGO
Fox News

EXCLUSIVE: A group of Republican senators is introducing legislation to block the Biden administration from sending personnel and funding from the Department of Veterans Affairs (VA) to alleviate the crisis at the southern border. The senators are alarmed by the Biden administration's announced termination of Title 42 on May 23,...
CONGRESS & COURTS・27 DAYS AGO
Bridget Mulroy

Earthquakes are putting the states to the test.(Chandler Cruttenden/Unsplash) A series of earthquakes have hit Texas, California, Utah, Nevada, New Mexico, Puerto Rico, Hawai’i, and Alaska. The United States took a small hit today compared to the rest of the world – all within a single day.
2 DAYS AGO

Harvard polled Americans under 30 who are likely to vote in the midterms and found 85% of them want some government action on student loan debt.
PRESIDENTIAL ELECTION・28 DAYS AGO
CBS News

A 60-year-old man who has been charged in the January 6 insurrection at the Capitol has been identified as the son of a fames American artist. Vincent Gillespie, who has been in a legal battle against his stepmother to gain control of paintings by his father, Gregory Gillespie, was arrested in February on charges relating to the Capitol riot.
ATHOL, MA・27 DAYS AGO
MSNBC

Greene testified on Friday that she didn't recall whether she asked Trump to invoke military rule, despite telling Meadows to relay the idea to Trump.
ATLANTA, GA・28 DAYS AGO

The poster offered a solution for what someone should do should they see someone in the restroom they don't think matches the sign on the door.
RELIGION・28 DAYS AGO
NBC News

A Kansas legislator said she does not “appreciate the huge transgender female who is now in our restrooms in the Capitol,” seeming to refer to her only transgender colleague. State Rep. Cheryl Helmer made the statement in an email with a University of Kansas graduate student, who voiced...
KANSAS STATE・27 DAYS AGO
Newsweek

"This should never have been allowed to occur to my colleague," Representative Matt Gaetz said about the legal challenge seeking to disqualify Greene.
GEORGIA STATE・28 DAYS AGO
NBC News

MEXICO CITY — Mexican President Andrés Manuel López Obrador on Monday urged U.S. Latinos not to vote in November’s midterm elections for politicians who have “mistreated” them, in response to a comment by former U.S. President Donald Trump. Trump boasted at a rally in...
PRESIDENTIAL ELECTION・27 DAYS AGO

According to the U.S. Department of Agriculture, emergency allotments were authorized under the Families First Coronavirus Response Act to help address temporary food needs during the pandemic for...
POLITICS・17 HOURS AGO
Newsweek

Former President Trump shared the post on Truth Social, the platform he set up after getting banned from Twitter over fears he would use it to incite violence.
POTUS・1 DAY AGO
Newsweek

The former president referenced scoring well on a cognitive test in 2018, which is designed to detect whether a person has early stages of dementia.
DELAWARE COUNTY, OH・29 DAYS AGO
Daily Mail

Renowned actor Morgan Freeman and the late Sen. John McCain are among nearly 1,000 Americans who Russian officials said are 'permanently banned' from entering the country. The Kremlin added them to the list of 963 Americans who are 'black listed' from Russia on Saturday in retaliation to Western sanctions for the February 24 invasion of Ukraine.
CONGRESS & COURTS・2 DAYS AGO

WASHINGTON (Reuters) - The United States on Tuesday offered a reward of up to $10 million for information on six people it described as Russian military intelligence officers who had conducted cyber attacks affecting critical U.S. infrastructure. The six officers work in a cyber-focused unit of Russia's Main Intelligence Directorate...
PUBLIC SAFETY・27 DAYS AGO
GOBankingRates

May is almost here, and millions of households are looking forward to their next SNAP payments. See: Surprising Things You Can Buy With Food StampsFind: SNAP 2022 -- Is My State Giving Out Extra Money...
AGRICULTURE・2 DAYS AGO
Newsweek

Individual judges may not like the policy choices of the Biden administration, but it is not their job to weigh in on that policy debate.
TEXAS STATE・28 DAYS AGO
WEKU

A new clinic offering abortions is set to open in Wyoming, despite a looming ban

A modest, tan building sandwiched between a gas station and a small apartment house near downtown Casper, Wy., has become an unexpected focal point of America's abortion debate, just weeks before Wyoming could outlaw the procedure. Inside, a nonprofit is renovating the space into a clinic that, beginning in June,...
WYOMING STATE・37 MINUTES AGO