Darius McCrary aka Eddie from “Family Matters” has a little daughter who is totally adorable and he shared pictures of themselves hanging out and enjoying each other’s company.

Spending time together with family is an important part of creating memories and being there for one another irrespective of the constraints posed.

Darius McCrary, popularly known for his role as Eddi on the sitcom “Family Matters,” loves to spend time with his daughter as seen in recent pictures he shared. 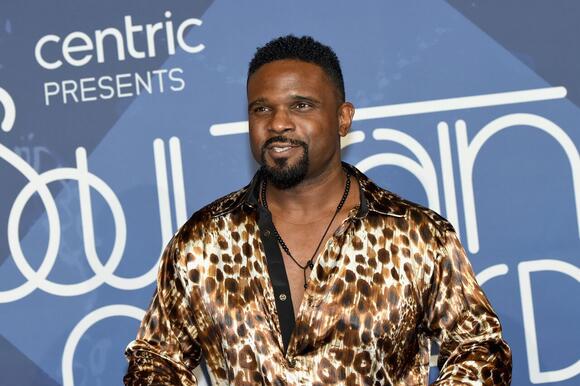 McCrary posted a picture of himself and his daughter, Zoey, who had on red lipstick and a slight amount of makeup on her face hanging out and having a great time.

The post showed Zoey with her double bun grinning widely for the camera as her dad carried her in his arms. She made the peace sign for the camera. The post had the caption:

McCrary on the other hand looked dapper in his dark sunshades and headphones resting on his head. He pouted for the camera as he balanced Zoey in one hand while taking the picture.

Fans of McCrary took to the comments section of the post to talk about how happy they were that he was spending time with his daughter despite the rocky past they had.

Their daughter Zoey was reported to have been abused and neglected by McCrary.

For the next post, McCrary shared a picture of himself although it was a back view shot. The post showed his still carrying Zoey and their matching sweatshirt was evident. The father-daughter pair matched their sweatshirts with shorts and sneakers.

The two posts which were shared with McCrary’s 326,000 followers had numerous likes individually and comments from colleagues of McCrary. One such comment was from Torrei Hart who said:

It was recently rumored that McCrary and Kevin Hart’s ex-wife Torrei are seeing each other. The two have been reported to be in some sort of romantic relationship although they have not addressed the issue.

Prior to the rumored romance with Hart, McCrary has been married and divorced three times. His first marriage was to Juliette Vann from December 2005 to 2006.

He later got married to Karrine Steffans in 2009 before divorcing in 2011. Steffans accused McCrary of being a domestic violent partner. The same thing his next wife Tammy Brawner said.

Brawner and McCrary were married from 2014 to 2017 and settled their divorce in 2019. Their daughter Zoey was reported to have been abused and neglected by McCrary and Brawner filed a restraining order against him. Things look to be better between them now.

u really want to start this publicity, with ur daughter it's a mess out here, keep her safe, man it ain't worth it.

David Ruffin will always be remembered for his charisma and singing talent on the big stage. However, his personal life was not as successful as his career. Inside the life of David Ruffin. Before his demise, David Ruffin was well known as an American Soul singer and musician. Born on...
RELATIONSHIPS・2 DAYS AGO
Amomama

Luenell Campbell has won many hearts with her comedic and acting skills. However, her love for her husband constantly melts hearts and appears to be her topmost priority. Luenell Campbell is popularly known as an American actress, comedian, and writer. She has landed several roles, however, she is mostly famous for appearing in the movies "The Rock," "A Star Is Born," and "That's My Boy."
RELATIONSHIPS・3 DAYS AGO
Amomama

Patty Duke was abandoned by her parents and forced to live with her managers for her career's sake. She kept trying to please them to avoid being sent off again. Most people knew Patty Duke as an impressive actress, recipient of many awards. But before achieving fame and fortune, she was just Anna Marie Duke, a child actress abandoned by her mom and abused by her managers.
NEW YORK CITY, NY・2 DAYS AGO
Amomama

Diana Ross Once Called Her 2nd Husband the ‘Love of My Life’ - Who Was Arne Naess Jr.?

Diana Ross and Arne Naess Jr were married for 13 years before their divorce. Shortly after they split, the latter lost his life in an unfortunate circumstance. Meet Arne Naess Jr. Diana Ross has not had the most stable romantic life, but she valued the friendship she shared with the...
MUSIC・2 DAYS AGO

Beyoncé is notoriously private when it comes to her family life but delighted fans on Monday after sharing a rare photo with her youngest daughter Rumi. The Black Parade hitmaker took to Instagram to share a series of snapshots from her vacation, and it looked liked they were having the best time!
CELEBRITIES・4 DAYS AGO
Amomama

Bobby Brown and his oldest daughter Bodhi with his manager wife spent some fun time with their dogs indoors, and they playfully posed, showing their striking resemblance to each other. Iconic musician Bobby Brown seems to be aging backward and is still youthful in appearance and actions. The celebrity, who...
PETS・13 DAYS AGO
Amomama

Nia Long, who starred as Bird in "Soul Food," may not be married, but she is enjoying her time with her longtime lover and the father of her second son. See how they look adorable while posing side by side during their time at the US Open. "Soul Food" star...
CELEBRITIES・3 DAYS AGO
Amomama

Famous actress Angela Robinson recently shared a lovely snap of her little boy on his first day of pre-school, and fans could not help but gush over his sweet looks, especially his afro hair. Motherhood means a lot to “The Haves & the Have Nots” star Angela Robinson, and a...
CELEBRITIES・1 DAY AGO

Keshia Knight Pulliam recently went down memory lane as she recalled the events of her engagement night. She shared the moments with her Instagram fans, and they loved it. American actress Keshia Pulliam Knight remains one of the most iconic stars in Hollywood. She is famous for her role as Miranda Lucas Payne in Tyler Perry's "House Of Payne" and Rudy Huxtable in "The Cosby Show."
RELATIONSHIPS・9 HOURS AGO
Amomama

Monica Calhoun became popular after playing Mia in "The Best Man," but these days, the 50-year-old enjoys life as a single mom, caring for her special needs son. Monica Calhoun has gone about her life as a single mom to her blind son with pride. However, the actress does not seem to have let things get in her way, as she recently shared a new picture showing she still has her groove.
CELEBRITIES・1 DAY AGO
Amomama

RonReaco Lee AKA Tyreke from ‘Sister, Sister’ Is a Doting Dad to 2 Kids - Glimpse inside His Fatherhood

RonReaco Lee is a proud father of two amazing kids who make up his world. His approach to fatherhood is impressive, much like his prowess on the big screen. Actor RonReaco Lee has played a lover, a mechanic, a band director, a cunning sports manager, and a criminal on-screen, performing each so well that it is quite tasking to decipher his true personality.
FAMILY RELATIONSHIPS・14 DAYS AGO

American rapper Eve and her husband, Maximillion Cooper, sent fans into an uproar as new stunning photos of them lighting up the red carpet circulate social media. It’s red carpet season, and a lot of celebrities have been making their rounds striding elegantly. One of those celebrities that have kept people talking is Eve.
CELEBRITIES・9 DAYS AGO
E! News

Watch: What Would Drew Barrymore Do If Someone Flashed Her on TV?. Drew Barrymore is leading with gratitude, grace and thankfulness. From Hollywood heir to child star, rom-com icon to talk show host, Barrymore has lived a thousand lives—and doesn't regret one minute of any of them. The Drew Barrymore Show host movingly reflected on her past during E! News' Daily Pop on Sept. 10, and even gave some advice to her younger, headline-grabbing self.
CELEBRITIES・7 DAYS AGO
International Business Times

Mindy Kaling has shared the photo of her son, Spencer, who turned one this Friday. The actress says the boy's character is a little different from his elder sister, 3-year-old Katherine. The 42-year-old actress took to Instagram on Monday to reveal that she celebrated her son's birthday on Friday. "My...
FAMILY RELATIONSHIPS・10 DAYS AGO
People

Tom Cruise and Nicole Kidman, who divorced in 2001, share adult children Bella and Connor. Isabella "Bella" Kidman Cruise is showing off her Halloween-themed art. The 28-year-old daughter of Tom Cruise and Nicole Kidman shared a photo of her latest work on her Instagram page Tuesday, an eerie abstract-looking portrait.
CELEBRITIES・9 DAYS AGO
Amomama

After having three kids, Beyonce is in the best and most enviable shape. She recently flaunted her killer curves, rocking a spaghetti strap playsuit during her Europe gateway with her family. See how adorable they look. Award-winning singer Beyonce, and her rapper/music executive husband, Jay Z, have contributed immensely to...
BEAUTY & FASHION・3 DAYS AGO
Amomama

Mo'Nique, aka Nikki, who tingled excitement in many lovers of the "The Parkers" show, looks very different now and is proud of her new physique. See how she flaunts the slimmer killer figure posing in daring tight catsuits in new posts. Mo'Nique's aka Nikki in the UPN black family drama...
WEIGHT LOSS・11 DAYS AGO
Hollywood Life

Denise Richards’ Daughter Sami, 17, Sticks Her Tongue Out, Says ‘Nothing Is Real’ Amid Family Drama

Denise Richards and Charlie Sheen’s daughter Sami, 17, has broken her social media silence after it was confirmed she left her mom’s house to live with her dad. Denise Richards and Charlie Sheen‘s 17-year-old daughter Sami shared a defiant photo on Instagram on Sunday, Sept. 12, just days after it was revealed that she had moved out to her mom’s house to go live with her dad.
FAMILY RELATIONSHIPS・3 DAYS AGO