Actor Giles Terera: ‘Lin-Manuel read my manuscript, Hamilton and Me, and was quite emotional’ 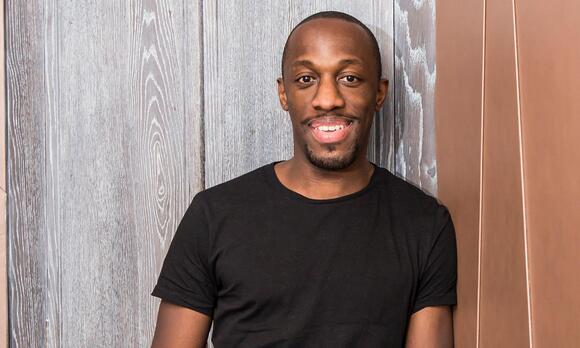 The British actor Giles Terera has appeared in many critically acclaimed stage productions, including The Tempest , The Book of Mormon and Ma Rainey’s Black Bottom , but is best known for his portrayal of Aaron Burr in the London production of Lin-Manuel Miranda’s musical Hamilton , which won Terera an Olivier award. Last year, he was appointed an MBE for services to theatre; his book, Hamilton and Me: An Actor’s Journal , has just been published.

You found out on your 40th birthday that you’d got the role of Aaron Burr in Hamilton . How did you feel?
I felt a strong connection to him, like I knew the character. Like when you meet someone and you just click – it felt like that.

Your book, Hamilton and Me , is essentially a diary documenting the audition, rehearsal and performance process. What was your aim in writing it?
I read a couple of really influential books when I was starting out – Peter Brook’s The Empty Space and Antony Sher’s Year of the King . I found those two really freeing in terms of following your instinct and connecting with your imagination. My diary looks at the process – not the pop cultural phenomenon, but the day-to-day work; the nuts and bolts. My hope is that other young actors will be able to look at it and apply it. Whether they’re doing their second year performance at drama school or about to make their debut on stage.

How did Lin-Manuel Miranda react to it?
I sent the manuscript to him, and about two hours later he emailed saying that he had read the entire thing and was quite emotional as he was writing. He was very grateful that I’d been taking notes and had documented the experience. So that was a good day.

You say “not only was I playing this character, I was being taught by him”. What did you mean by that?
Burr is someone who is quite brittle, emotionally and spiritually. He’s all or nothing. In many ways I’m quite similar to Burr, and in many ways I’m not. I have never actually shot someone. But something I learned was that you can’t be brittle or else you have to be prepared for the consequences. The character has such an intense journey, and as an actor you have to find a way to not be completely taken over by it. Otherwise you go crazy.

What are your thoughts on the historical inaccuracy of Hamilton , and the fact that the founding fathers’ being slave owners was not mentioned much throughout the play?
It didn’t take me very long in my research to find out about Thomas Jefferson’s slave-owning history, which is very well documented. At the same time I found research that Burr was on very good terms with African Americans. He entertained them in his house for dinner. They’re all very contradictory characters. My hope is that people are at least being brought to the subject. They can then find out more.

In your speech at the Olivier awards , you praised being a part of such a diverse cast and said that Hamilton wasn’t a box-ticking exercise. What compelled you to make that statement?
Because it was true. I didn’t really think a lot about what I was going to say, but once I was there, I just said what I had always felt. In Hamilton , it wasn’t just black actors and white actors – we had people from all different backgrounds. I was just really grateful to be in that environment.

Your debut play, The Meaning of Zong , is premiering at Bristol Old Vic in September. What’s it about?
It’s based on a historical event, a massacre [of 130 enslaved Africans] on board a Liverpool-owned ship and the trial which took place as a result of it. It looks at two figures at the time, Granville Sharp and Olaudah Equiano, who used that story to bring awareness to the public. It was one of the events that succeeded in bringing together like-minded peopleto oppose the slave trade.

Why is now the right time to tell that story?
The legacy of that event is still being played out today. There was a huge bailout [after the Slavery Abolition Act of 1833, the British government paid £20m in compensation to registered owners of freed slaves for the loss of business assets], which contributed [to] setting up some of Britain’s biggest families. A lot of the companies that are a part of our lives have their origins in that time period. What the slave trade meant to the British economy is vast. The statue of Edward Colston was chucked into the water in Bristol because we’re walking past this legacy every day. We have to be accountable if we’re going to move forward in any kind of meaningful way, and so I really wanted to explore this particular story as a way of contributing to that conversation.

Your jazz, blues and funk-inspired recent song cycle , Black Matter , explores living in Soho. How did that work come about?
Soho was completely empty during the lockdown. I’d never seen that before. When things started to ease, people were out in the streets and protesting. I just found myself looking out of the window and writing. After about two weeks, I had a collection [of songs]. A friend of mine runs [music and cabaret venue] the Crazy Coqs and he called me up. We were going to do it with a live audience. When that was no longer an option, we filmed it instead.

How do you see the arts sector recovering in the aftermath of the pandemic and Brexit?
We are very durable and adaptable, and in two years’ time we will know about what happened because of the people that will create art about it and compose about it. But it is an industry and it needs forward planning. When the rug is pulled, or no provisions are there, it’s very difficult to sustain.

What message do you have for our politicians?
We have to acknowledge what the creative arts bring to our society and to our economy. The industry is in huge need of help, so I would like to see action. What would last year have been like if you couldn’t listen to music?

You have a twin sister who you have thanked in speeches. As your career has soared, what has that relationship meant to you?
Her name is Nicola, she’ll want that in! We’re really different. She always says: “I can’t think of anything worse than getting on stage!” This month I’ve got to go to the investiture for my MBE. I’m taking her with me because she’s the most encouraging. She comes to all of my shows. Though with Hamilton she said: “I liked Obioma [Ugoala] as Washington. He was great.” She’ll talk about everyone else but me! She wants to keep my feet on the ground. I have to give her props. In London, it’s all very insular. It’s good to have someone who has nothing to do with the industry and who doesn’t really give a shit about the things that I do.

Country music has sometimes been described as the authentic blue collar voice of the American south. In the past half-century no singer and songwriter did more to justify that claim than Loretta Lynn, who has died aged 90. In the words of the music historian Bill Malone, Lynn’s songs “spoke for working-class women in a way no ardent feminist could ever do”.
CELEBRITIES・2 DAYS AGO
The Guardian

If the court upholds the rogue ‘Independent State Legislature’ theory, it would put the US squarely on the path to authoritarianism
CONGRESS & COURTS・1 DAY AGO
The Guardian

Scientists have published findings confirming that orcas hunt great white sharks, after the marine mammal was captured on camera killing one of the world’s largest sea predators. A pod of killer whales is seen chasing sharks during an hour-long pursuit off Mossel Bay, a port town in the southern...
ANIMALS・1 DAY AGO

WNBA star Brittney Griner is at her “absolute weakest moment in life right now” as she faces a hearing in Russia later this month for her appeal of a nine-year prison sentence for drug possession, Griner’s wife said in an interview that aired on Thursday. Cherelle Griner...
NBA・1 DAY AGO
The Guardian

They both started wars in neighbouring countries, hold significant sway over energy markets, are known to brook no dissent and to covet spots in history. Russia’s embattled president, Vladimir Putin, and Saudi Arabia’s de facto ruler, Mohammed bin Salman, seem to have a lot in common. Nearly eight...
ECONOMY・2 DAYS AGO

Franca Fendi, one of the five sisters who inherited a small Roman leather goods workshop and together transformed it into a luxury fashion house, has died in Rome on Monday. She was 87. Born in 1935, she participated from a young age in the management of the company that from...
BEAUTY & FASHION・1 DAY AGO
The Guardian

The home secretary’s chilling rhetoric lays the ground for the harshest immigration environment yet, says writer and academic Maya Goodfellow
IMMIGRATION・2 DAYS AGO
The Guardian

California serial killer appears to be ‘on a mission’, as police link seven shootings

Ballistics tests tie together fatal shooting in Oakland with killings of five men and the non-fatal shooting of a woman in Stockton
OAKLAND, CA・2 DAYS AGO
The Guardian

Live-fire drill with the US was supposed to be a show of strength, but ended in embarrassment and caused alarm among nearby residents
AEROSPACE & DEFENSE・2 DAYS AGO
The Guardian

Hurricane Ian was less a natural disaster than a human-made one. We must stop building on swamps

Remember when Donald Trump reportedly suggested that we nuke hurricanes in order to stop them hitting the United States? That idea was obviously ludicrous and got rightly ridiculed. Ultimately, however, Trump’s ideas weren’t much more absurd than the accepted status quo in the US – which is to build large amounts of housing on land vulnerable to natural disasters. Fantasies of nuking hurricanes are ultimately just as ridiculous as fantasies that millions of people can move on to paved-over swampland in the most hurricane-ravaged state in the US without disaster striking.
FLORIDA STATE・2 DAYS AGO
The Guardian

‘We have not seen any reason to adjust our own nuclear posture,’ says press secretary
PRESIDENTIAL ELECTION・17 MINUTES AGO
The Guardian

A 13-year-old Victorian boy is one of eight teenagers to have been committed to stand trial for the murder of Declan Cutler, after a magistrate decided that, despite his youth, he was capable of forming a criminal intent. The magistrate ruled that she did not have to read an 1,100-page...
PUBLIC SAFETY・1 DAY AGO
The Guardian

Friends, rivals and enemies took their seats in the Grand Kremlin Palace as Vladimir Putin gathered the country’s elite to formalise Russia’s illegal annexation of four occupied regions in Ukraine. The ceremony was meant to portray strength and unity, but within 24 hours had been overshadowed by Russia’s...
POLITICS・7 HOURS AGO