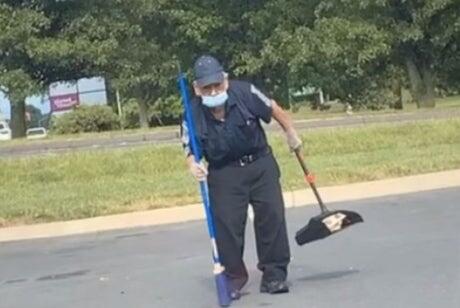 A TikTok video of an elderly McDonald’s worker struggling to clean the car park in hot temperatures has sparked anger on social media.

The senior citizen was captured working hard outside the fast-food restaurant in Connecticut as younger colleagues stayed inside.

The video, posted by @kanykaine22, has now had more than 2.2m views.

And when she setup a GoFundMe for the worker, who gave his name as Gregorio, she raised more than $40,000 to help him retire.

“I’m at the McDonald’s in Bloomfield, Connecticut,” she says on the video.

“A young man took my order and my payment. A young woman served my food.

“Another young woman came outside to serve people that were doing pickup. I go to my car, and I see this man, outside, in this weather, sweeping this parking, while these three inside, in the AC.

“This man has no water, no food, no one is out here watching him. He’s obviously elderly; he’s at least 70 years old.

“He can’t stand up straight. He’s struggling. You’re telling me people can’t have consideration and help this man? He deserves a f***ing raise; he deserves a gold medal.”

She then sat down with Gregorio and a relative and he thanked people in Spanish for their support.

Social media users were quick to rally around Gregario, who @kanykaine22 said lost his wife to Covid-19 last year.

“This is the world that we live in where elderly ppl like him have to work bc they probably don’t make enough from retirement to survive,” wrote @heyluve_its_nique.

And @savannascholten, wrote: “He should be inside, not out in the heat like that; that is just wrong on so many levels.”

It just show's that seniors are harder workers that these so called youths. Also did you notice he's not on a cell phone like the younger generation. GOD BLESS HIM.

Seniors generally take a job to help them get by because their social security is simply just not enough. Even with pentions and a little life savings it just isn't enough to live on. That's what's wrong with our country and the lack of respect the government gives them.

Video of McDonald's Workers Berated Over Splenda Packet at Drive-Thru Gets 3.8 Million Hits

"I'll f**k your ass up, girl," the man screamed at a female McDonald's employee after being told the restaurant had run out of Splenda, police said.
ATLANTA, GA・6 DAYS AGO
93.1 KISS FM

A guy and his horse casually strolled down to a McDonald's drive-thru over the weekend in Horizon City. Thanksgiving weekend was a busy one for many folks around town, from family gatherings to Friendsgiving to Black Friday shopping and, of course, the occasional odd occurrence of a man on a horse ordering drive-thru at a McDonald's.
HORIZON CITY, TX・7 DAYS AGO
lambcountyleadernews.com

The 21st Annual Christmas for Kids kicked off November 12, 2021. Sheriff Gary Maddox and the Lamb County Sheriff’s Office continue to celebrate Christmas with the toy drive that helps families in Lamb County communities. On December 7th, beginning at 7 a.m. the Sheriff’s Department will be at McDonald’s on...
LAMB COUNTY, TX・5 DAYS AGO
Shropshire Star

An elderly, largely deaf man who had "no business driving" mowed down and killed a mother-of-five while parking in a town centre, a court heard. Frederick Harrington, 78, of Knucklas, Knighton, was suffering from the side effects of strokes, had limited mobility, and was substantially deaf, Merthyr Tydfil Crown Court was told.
ACCIDENTS・12 DAYS AGO

Arthur Walker, 45, threatened the worker who was dealing with a build-up of traffic outside a McDonald's branch, a court was told.
TRAFFIC・15 HOURS AGO
NWI.com

A fundraising initiative begun in 2006 continues to be a big driver of financial support for Meals on Wheels (MOW) of Northwest Indiana. Light the Night for Senior Hunger will kick off its 15th year with a lighting ceremony on Nov. 30. Through the program, financial gifts can be made during this special holiday campaign with a light on a tree representing a donation level. The Trees of Hope display outside of the organization's Merrillville office campus lights up more as donations are made throughout the season.
MERRILLVILLE, IN・12 DAYS AGO
lincolnnewsnow.com

Lincoln County, Mo. - If one were to walk into any of the local shops in Lincoln County, he or she will see the familiar white and red donation box for “Toys For Tots.”. It has become an annual tradition, not just in the county, but nationwide. Inside the basement...
LINCOLN COUNTY, MO・7 DAYS AGO
NBC 29 News

CHARLOTTESVILLE, Va. (WVIR) - United Way of Greater Charlottesville is partnering with local organizations and businesses to host the Driving Lives Forward fundraiser. The initiative helps financially compromised families obtain affordable vehicles. “It was born out of the understanding that a lot of us take cars for granted, I we’re...
CHARLOTTESVILLE, VA・7 DAYS AGO

The N.E.W. Salvation Army of Nash, Edgecombe and Wilson counties is continuing an annual event that raised more than $500,000 nationally in just four hours last year — the National Commander’s Red Kettle Challenge. The organization is raising the stakes this year and is doubling the national goal to $1...
WILSON, NC・10 DAYS AGO
mvprogress.com

Every year, hundreds of donors deck the halls of the Maritime Center in New Haven to raise funds for the families at the Ronald McDonald House of Connecticut.
NEW HAVEN, CT・4 DAYS AGO
The Independent

A wounded former soldier from Co Down has walked hundreds of miles across the UK to raise money for other veterans and the health service. Robert Maxwell 54, who served with the Royal Irish for 11 years, started his expedition at St Paul’s Cathedral in London before trekking across Great Britain via the Isle of Man to finish at St Anne’s Cathedral in Belfast on Monday.
CHARITIES・6 HOURS AGO

A Charlie's Angels-style gang of glamorous Brazilian drug couriers who delivered narcotics across London on mopeds have been jailed after police dismantled their operation. Controlled and recruited by the only man in the organisation, the female gang members supplied drugs on a vast scale, making almost £100,000 profit every month.
PUBLIC SAFETY・14 DAYS AGO
Best Life

Walmart Is Barring Shoppers From Doing This, Starting Dec. 15

If there's one thing Walmart is known for, it's the deals: Shoppers come back again and again for a wide variety of products at low prices. But the retailer isn't always able to cater to all customers, which has earned it some pushback from regulars. Recently, many Walmart shoppers were upset to find out that the retailer would no longer be using its normal layaway program, right ahead of the pricey holiday season. And now, another major decision could affect millions of individuals who are counting on the policies currently in place. Read on to find out what you will no longer be able to do at Walmart next month.
HEALTH INSURANCE・24 DAYS AGO
The Independent

A married couple has left behind eight children after they died in a murder-suicide just six months after moving to Atlanta, Georgia to expand their businesses. Keianna Burns, 44, and Ronnell Burns, 46, were home alone on 6 November just before 9pm when Ms Burns shot her husband to death and then killed herself with the weapon, police have said. Ms Burns posted a video of herself singing and dancing with one of her children just hours before the shootings. Police said the child was with a relative when the couple died. “I’m asking you one thing, because I...
PUBLIC SAFETY・17 DAYS AGO
NBC News

A FedEx driver who dumped nearly 400 packages of various sizes into an Alabama ravine did so on at least six occasions, the Blount County Sheriff’s Office said. “Update on the FedEx dump. Investigators have determined that the driver dumped at least six times making FedEx a victim of six different Theft of Property cases,” Sheriff Mark Moon wrote on the office’s Facebook page Tuesday.
BLOUNT COUNTY, AL・5 DAYS AGO
WTKR News 3

Family Members Say Woman Was 'Beaten to Death' in Cancún, Allege Boyfriend Had Been Violent Before

Family members of a Washington woman killed in Mexico last week are sharing details about her killing and the now-arrested boyfriend she was traveling with. Sativa Transue, 26, was on her second day of vacation in Cancún, Mexico, when she began sending her loved ones concerning messages. "[On Friday] she...
PUBLIC SAFETY・3 DAYS AGO
editorials24.com

They just wanted one last ride. A group of motorcyclists in Ecuador took the body of their dead friend from its coffin, put it on the back of a chopper and leaned it against the driver’s back, as half a dozen men cheered, the Daily Star reported. Images show Erick...
PUBLIC SAFETY・1 DAY AGO
Telegraph

A teenage drug dealer who tried to decapitate his 12-year-old friend because he feared he would "snitch" on him has been named, after a judge ruled that the brutal attack should prompt a debate on knife crime. Roberts Buncis, 12, was killed by Marcel Grzeszcz, 15, in Fishtoft, near Boston,...
PUBLIC SAFETY・28 DAYS AGO