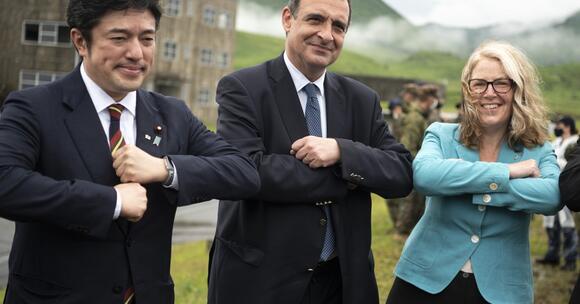 Russia and China are coordinating military exercises to threaten not only Taiwan but also Hawaii, according to a senior Japanese defense official who warned the United States to beware of a Pearl Harbor-style surprise attack.

“We have to show the deterrence towards China, and not just China but also the Russians, because, as I told you, that they are doing their exercises together,” Japanese deputy Yasuhide Nakayama told the Hudson Institute this week.

Taiwan’s vulnerability to an invasion from mainland China has become a preoccupation of Indo-Pacific strategists in recent months, as Chinese Communist forces escalate their military drills around the island. Nakayama, who was unusually frank about the need for democratic nations to ensure Taiwan’s survival, implied that Russia and China are working as allies preparing for a major conflict.

“I think the Taiwanese are really concerned,” he said. “And also, they’re focusing on the two big countries collaborating and [presenting] a lot of threat towards Taiwan."

Chinese Communist officials regard Taiwan as a renegade province, one that they have claimed since coming to power in 1949 but never governed. Most countries recognize the regime in Beijing as the official Chinese government and do not have formal diplomatic relations with Taiwan, although the U.S. has maintained a friendly relationship and provided weaponry to help Taiwanese authorities deter an invasion from the mainland.

“We have to protect Taiwan as a democratic country,” Nakayama said before suggesting that world leaders may have erred during the Cold War by seeming to concede that Taiwan would eventually be reunited with mainland China. “Was it right? ... I don’t know.”

China’s Foreign Ministry protested his description of Taiwan as a “country” and alleged that Tokyo is trying to portray China as a threat in order to justify its own military buildup.

“This is extremely irresponsible and dangerous,” Chinese Foreign Ministry spokesman Wang Wenbin said Tuesday. “The politician in question flagrantly refers to Taiwan as a 'country' on multiple occasions, severely violating principles set out in the four political documents including the China-Japan Joint Statement and its solemn and repeated commitment of not seeing Taiwan as a country. We ask Japan to make crystal clarification, and ensure that such things won't happen again.”

Nakayama emphasized throughout the talk that tensions in the Indo-Pacific have a direct bearing on American security, especially in light of coordination between China and Russia. He drove home the point by raising the specter of the Japanese attack on Pearl Harbor, which provoked the U.S. military intervention in the Second World War.

“Seventy years ago, we attacked Pearl Harbor, but now the U.S. and Japan [are] very good allies, one of the best allies all over the world,” he said, noting that Russia is conducting naval drills in the Pacific this week. “I don't want to remind [us of the attack] 70 years ago, but we have to be careful of the exercising of the Russians. They are taking place [off] the western side of that, Honolulu, I mean, in Hawaii.”

Russian officials described their “missile and artillery firings” in the Pacific as an equipment check. “In the course of practical measures, the warships jointly repelled a notional enemy’s air attack,” the Russian Pacific Fleet’s press office said Wednesday per state media. "The exercise was intended to check the reliable operation of shipborne weapons in a hot climate.”

For Nakayama, such operations make clear that Japan and the U.S. have a common problem that needs to be deterred jointly.

“Honolulu to Japan, this zone is becoming — [the] Chinese and the Russians come in this zone,” he said. “So, [for] the United States, the protection line is going to be backwards a little bit.”

In plain English, we have a problem in the White House: a weak politician as president who has no common sense, no wartime expertise, is out of touch with global much less national situations, is losing favor in America and key allies, and I sense that if somebody shoots something at us or at an ally, our Commander in Chief will duck for cover under that big Oval Room desk....and call the Red Cross.

Oh dont worry our new woke military will let them know that it's not fair for 2 countries to gang up on one and maybe they will give them a book to read on equality and tell them they are racist. And if that don't work they will just send in antifa to protest

@ Ray Andrews, actually Trump was ordered to go to the Bunker by the Secret Service. He did not just simply "run and hide" in that Bunker like you and so many others seem to think. He actually had to be forced down by Secret Service. Had the Choice been his, and his alone, he never would have went down to that Bunker at all, instead, he would have faced the issue up front and personal, and dealt with it accordingly.

The challenge for future US Navy aircraft carriers is much closer to home than China's missiles, top Democrat says

Carriers are still the centerpiece of the US fleet, but a stronger China and tighter budgets mean rethinking how they're designed and used.
MILITARY・9 DAYS AGO
dallassun.com

Chinese state media warns US of another 'deadly attack'

Beijing [China], September 12 (ANI): The editor of Chinese state media, Global Times, Hu Xijin on the 20th anniversary of the 9/11 terror attack predicted that there will be another "deadly attack" in the US. "The September 11 attack was suicide attacks by 19 terrorists, but it was not the...
CHINA・13 DAYS AGO
Newsweek

Between Missile Launches, China Ally North Korea Lashes Out at U.S. Over Taiwan

"The U.S. moves clearly prove the nature of the American empire that is leaving no means untried in a bid to attain its sordid purpose," analyst Kim Myong Chol wrote in North Korean state media.
U.S. POLITICS・10 DAYS AGO
Interesting Engineering

The final frontier is getting crowded, if you can believe it. And Chief of the U.S. Space Force Gen. John Raymond warned that security in space will fall under a "full spectrum of threats" from China that will call for substantial international cooperation, according to an initial report from Nikkei Asia.
AEROSPACE & DEFENSE・17 DAYS AGO

CHINA has vowed to "definitely win once there is a war" with the US after accusing the USS Benfold destroyer of "seriously violating the country's sovereignty and security." An editorial for the Communist Party-controlled Global Times noted that "only by making the US have a taste of its own medicine can we touch the nerves of the US and its allies."
AEROSPACE & DEFENSE・16 DAYS AGO
Birmingham Star

China warns US against adding 'Taiwan' to name of Taipei's

Beijing [China], September 15 (ANI): China has warned the United States against recognising a change of the name of the Taipei Economic and Cultural Representative Office in Washington to the Taiwan Representative Office, urging America to abide by the one-China principle. This comes amid reports that America is "seriously considering"...
FOREIGN POLICY・11 DAYS AGO
Reuters

TAIPEI/BEIJING, Sept 19 (Reuters) - Taiwan threatened to take China to the World Trade Organization on Sunday after Beijing said it would suspend sugar apple and wax apple imports from the island on pest concerns, in the latest spat between the two over fruit. Relations between Taipei and Beijing, which...
CHINA・6 DAYS AGO

A second Tuo Chiang-class corvette has entered service with Taiwan's Navy. They are fast, multi-mission ships armed with anti-ship and anti-aircraft missiles, close-in weapon systems, torpedoes, and a deck gun. Their speed, design, and armament lead some to call them "carrier-killers" The new Tuo Chiang-class corvettes are swift, stealthy, and...
MILITARY・10 DAYS AGO
New York Post

Trump warns Taliban-seized US weapons will be given to China, Russia

Former President Donald Trump is warning that the massive stockpile of US weapons abandoned by the Biden administration in Afghanistan and seized by the Taliban will likely end up in the hands of Russia and China to be reverse-engineered — blasting the withdrawal as “the most embarrassing event in the history of our country.”
FOREIGN POLICY・12 DAYS AGO
SFGate

China’s most famous defector to America warned US intelligence agencies a coronavirus was spreading in Wuhan in November 2019 – six weeks before China admitted there was an outbreak. Wei Jingsheng, the father of China’s democracy movement, reveals in a new book, “What Really Happened in Wuhan,” that he first...
WORLD・11 DAYS AGO

China warns US-UK-Australia pact could ‘hurt their own interests’

China has told the US, the UK and Australia to abandon their “cold war” mentality or risk harming their own interests after the three countries unveiled a new defence cooperation pact. The trilateral security partnership, named Aukus, was announced on Thursday by the three nations’ leaders via video link, and...
POLITICS・9 DAYS AGO
tribuneledgernews.com

WASHINGTON — The Biden administration Thursday was fielding acute anger from a rival, China, and one of its closest allies, France, over a pact that will help Australia develop nuclear-powered submarines. The nuclear deal, which also includes the United Kingdom, was announced by President Joe Biden on Wednesday and immediately...
MILITARY・9 DAYS AGO
Daily Mail

Japan has staked its claim to the contested Senkaku Islands and will be defending them strongly against China amid escalating tensions in the region, the country's defence minister has warned. Nobuo Kishi said the territories, known as the Diaoyu Islands in China, unquestionably belong to Japan and warned any provocation...
MILITARY・9 DAYS AGO
Editor at Global Perspectives

UN Secretary-General Antonio Guterres spoke to The Associated Press, saying, "China and the United States to repair their “completely dysfunctional” relationship. The world's two major economic powers should be cooperating on climate and negotiating more robustly on trade and technology even given persisting political fissures about human rights, economics, online security, and sovereignty in the South China Sea."
5 DAYS AGO
WSOC Charlotte

UNITED NATIONS — (AP) — Warning of a potential new Cold War, the head of the United Nations implored China and the United States to repair their “completely dysfunctional” relationship before problems between the two large and deeply influential countries spill over even further into the rest of the planet.
WORLD・6 DAYS AGO
Reuters

HANOI, Sept 23 (Reuters) - Vietnam said on Thursday it is willing to share its experience and information with China for the world's second largest economy's bid to join the Comprehensive and Progressive Agreement for Trans-Pacific Partnership (CPTPP). "The CPTPP is an open free trade agreement," Foreign Ministry spokeswoman Le...
CHINA・2 DAYS AGO
TheConversationAU

After AUKUS, Russia sees a potential threat — and an opportunity to market its own submarines

The global opinions on the new AUKUS security pact between Australia, the US and the UK have been decidedly mixed. China and France immediately blasted the deal, while others, such as Japan and the Philippines, were more welcoming. Russia, one of the other few nations armed with nuclear-powered submarines, was...
MILITARY・3 DAYS AGO
The Independent

With increasingly strong talk in support of Taiwan a new deal to supply Australia with nuclear submarines, and the launch of a European strategy for greater engagement in the Indo-Pacific, the U.S. and its allies are becoming more assertive in their approach toward a rising China China has bristled at the moves, and the growing tensions between Beijing and Washington prompted U.N. Secretary-General Antonio Guterres on the weekend to implore U.S. President Joe Biden and Chinese leader Xi Jinping to repair their “completely dysfunctional” relationship, warning they risk dividing the world. As the U.N. General Assembly opened Tuesday,...
POLITICS・2 DAYS AGO