Good food. Good people. Good living. Localish is all about bringing out the good in America’s cities. 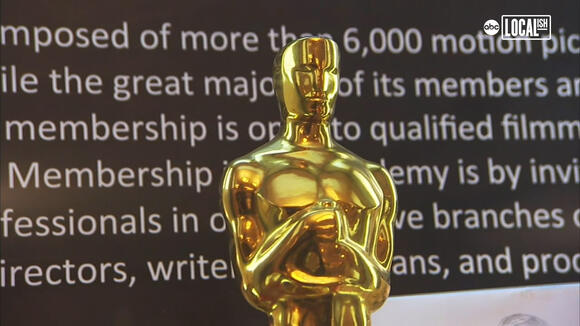 Its been the Hollywood Museum for almost 20 years, but before that it was the home of the makeup for makeup artists the Max Factor Studios Hollywood, and after a year of being closed due to Covid-19, it is set to reopen its doors and welcome the public back in August. Designed by famed architect S Charles Lee in the 1903s the building became the home of legendary make-up artists to the stars, Max Factor. "This is where all the movie stars came and got their looks before there was such a thing as a makeup," President and Founder Donelle Dadigan of the Hollywood Museum told Localish. "It all happened here in these world famous make up rooms." "Marilyn Monroe became a blonde in our blondes only room," she added. In 2003, facing demolition, Dadigan purchased the iconic building and transformed it into one of the largest collections of Hollywood memorabilia in the world. It has since become a place where the story of Hollywood and the entertainment industry and how it has grown, is told. The museum houses some of Hollywood's most iconic treasures including the original and complete underground prison set from the Oscar winning 1991 thriller, Silence of the Lambs. "When we've had Anthony Hopkins visit with us, he told us it was so realistic it was even more scary than when it was on the set because he said when he looked up he knew he was underground, just like in the movie," Dadigan said. With over 10,000 pieces of memorabilia coupled with the history of the building, The Hollywood Museum is excited to once again visitors this summer after a long closure. "Culturally its not just about films and costumes, but culturally its about who is this building named after and what made this building so famous and of course its Max Factor Hollywood's make up king," said Dadigan For more information visit http://thehollywoodmuseum.com/about/our-history-vision/ https://www.facebook.com/TheHollywoodMuseum https://twitter.com/HollywoodMuseum

These 5 Stars Modeled Their Met Gala Looks After Hollywood Icons

For those who were unaware, this year's Met Gala theme was “In America: A Lexicon of Fashion,” which meant the stars walked the red carpet wearing the looks that they thought best encapsulated “a modern vocabulary of American style.”. Of course, each star embraced the theme in various ways, whether...
BEAUTY & FASHION・14 DAYS AGO
dailynewsen.com

Since the Hollywood Academy began its journey in 1927 one of its objectives, in addition to delivering the Óscar, it was inaugurated a museum dedicated to the cinema that will open its doors over 90 years later with a spectacular building designed by the architect Renzo Piano. Although other cities...
MUSEUMS・4 DAYS AGO
NME

The Doors‘ legendary 1968 show at the Hollywood Bowl is set to be screened in cinemas for one night only later this year. The Doors: Live At The Bowl ’68 Special Edition will screen in cinemas worldwide on November 4, and feature a special conversation with the band’s surviving members, John Densmore and Robby Krieger.
MUSIC・11 DAYS AGO
Hyperallergic

Support Hyperallergic’s independent arts journalism. Become a Member ». LOS ANGELES — Call me old-fashioned, but at the preview of the Academy Museum of Motion Pictures — slated to finally open on September 30 after years of funding-, construction-, and pandemic-related delays — I wanted to see what it was actually like to watch a movie at the museum dedicated to the art form. In the midst of a pandemic and in a time where over a century’s worth of movie history is accessible from one’s own home, it can sometimes feel like both audiences and studios alike have begun to devalue the theater experience.
MUSEUMS・1 DAY AGO

Hollywood's new movie museum is ready for its close-up

In one of the first galleries you enter at the new Academy Museum of Motion Pictures in Los Angeles, there's a large screen showing clips from "Citizen Kane." Walk behind it, and there almost glowing in a spotlight is one of the film's most-famous props, the red sled, named Rosebud, one of three balsa wood models made for the picture. The other two were tossed in the furnace during the shooting of the critical last scene of the 1941 Orson Welles classic.
MOVIES・1 DAY AGO
Harper's Bazaar

The next Oscars may not be until March, but the Academy of Motion Picture Arts and Sciences can still hold a grand ceremony. The Opening Gala for the Academy Museum of Motion Pictures brought out Hollywood's biggest stars yesterday, as they celebrated the long-anticipated museum of movie memorabilia, which has been in the works since 2012. The gala's green carpet did not disappoint, with looks ranging from full-length ball gowns and sultry column dresses, to sleek pantsuits and even the odd motorcycle jacket. Look on to see the stunning fashion from the event.
BEAUTY & FASHION・1 DAY AGO
blackchronicle.com

Iconic filmmaker Melvin Van Peebles has died at 89 years old. According to The Hollywood Reporter, Van Peebles, father of Mario Van Peebles, passed away the evening of Sept. 21 and he was surrounded by family. The Criterion Collection and Janus Films said in a statement, “In an unparalleled career...
CELEBRITIES・4 DAYS AGO
NEWS10 ABC

Broadway is back: Iconic shows reopen 18 months since going dark

NEW YORK (PIX11) — Four of the most iconic musicals in history are making their big return to the Great White Way on Tuesday, 18 months after stages across the world closed at the start of the COVID pandemic. All 41 Broadway theaters are now allowed to open at full capacity, with precautions and safety protocols in place.
NEW YORK CITY, NY・13 DAYS AGO

At ‘Tarantino Live,’ Director’s Soundtracks Come to Life, With a Little Help From Jackie Brown, the Bride and the Gimp

What do the Bride, Jackie Brown, Django, Mia Wallace, Hans Landa, Cottonmouth, Stuntman Mike McKay, Mr. Pink, Charles Manson and the Gimp all have in common? For one thing, that they’re all characters in a stage musical now playing at the Bourbon Room in Hollywood. But its creators would rather that you not call “Tarantino Live” a musical per se, or at least not boil it down strictly to that term. For one thing, its “book” — largely an amalgam of dialogue from Quentin Tarantino’s movies — is a sort of loose fantasia tying characters and themes from the films together...
MOVIES・2 DAYS AGO
Best Life

See Elizabeth Taylor's Lookalike Granddaughter, Who's Carrying on Her Legacy

One of the most popular actors of Hollywood's Golden Era, Elizabeth Taylor enjoyed a long and legendary career. Born in London to American parents, Taylor moved to Los Angeles as a child in 1939, and wasted no time before landing her big break just a few years later. As a teen, she became a household name by starring alongside Mickey Rooney in the popular 1944 film National Velvet. By the 1950s, she became one of the most popular sirens of the silver screen, and by the 1960s, an Academy Award winner and the highest paid movie star alive. Today, she is best remembered for her performances in Cleopatra, Cat on a Hot Tin Roof, and Who's Afraid of Virginia Woolf?
BEAUTY & FASHION・16 DAYS AGO
POPSUGAR

Whenever Zendaya steps on the red carpet, you can always count on a showstopping look. Thanks to her expert stylist Image Architect Law Roach, and her own undeniable presence, Zendaya arrived at the Venice Film Festival premiere for Dune looking incredible in every sense of the word. This might be Zendaya's best look yet, with her sultry, wet-look dress courtesy of Balmain.
DESIGNERS & COLLECTIONS・23 DAYS AGO
Footwear News

Zoe Saldana was among the A-listers appearing at Venice Film Festival yesterday. The actress stepped on the red carpet along with her husband, Marco Perego, donning a dazzling red sequined Dolce & Gabbana dress and ankle-strap black heels. Saldana kept her look minimalistic sporting crystal stud earrings and an emerald ring. This sparkly ensemble was a great choice for the premiere of her movie “The Hand of God,” an Italian drama film featuring Christian Bale and Margot Robbie. Saldana’s take on this bold-hued sky-high slit dress also featured sequins and a plunging neckline. To complement the stunning outfit, Saldana wore a...
BEAUTY & FASHION・24 DAYS AGO

The 2021 Met Gala came and went in a star-spangled blur. Best-dressed regular Sarah Jessica Parker wasn’t there; neither was Beyoncé. But stars aplenty still climbed those famous Metropolitan Museum steps for the “In America: A Lexicon of Fashion”-themed fête, dressed in their finest patriotic fashions. Below, the most memorable looks from Monday night’s red carpet.
DESIGNERS & COLLECTIONS・14 DAYS AGO
Best Life

12 New Movies You Can Watch on Netflix This Weekend

The best flicks to keep you entertained through Labor Day. Not only has the weekend arrived, but it's also a long weekend if you're lucky enough to have Labor Day off. That means you have one extra day to sit in front of your TV, kick your feet up, and watch movies. And because it's also the beginning of the month, Netflix has just added a plethora of brand-new movies to its catalog and some more that are new to the streaming service as of this week. We took at a look at all of those offerings to bring you this list of recommendations to fill up your holiday weekend. Read on to see what you should start streaming!
MOVIES・24 DAYS AGO
Popculture

The red carpet at the MTV Video Music Awards always features showstopping ensembles and the 2021 VMAs proved to be no different. The annual award ceremony was held this year on Sunday, Sept. 12 at the Barclay's Center in Brooklyn, New York. The biggest names in music walked the red carpet and delivered some much talked about fashions. Lil' Nas X is a standout this time around.
CELEBRITIES・15 DAYS AGO
Popculture

The number one movie on Netflix's Top 10 Movies in the U.S. chart is surprisingly not a Netflix original. The spot is held by the 2012 thriller Safe House, starring Denzel Washington and Ryan Reynolds. The film also holds the number two slot on Netlfix's overall top 10 charts, just behind the British series Sex Education, which had its third season released on Friday.
MOVIES・9 DAYS AGO
wegotthiscovered.com

A Forgotten Emma Watson Movie Is Blowing Up On Netflix

Despite the glowing tributes being paid to the actress online, many of which read like an obituary for a career that had been brought to a close far too soon, Emma Watson didn’t retire from acting. Obviously, rumors spread like wildfire on the internet so the tears were already flowing before her agent, and then the Harry Potter veteran herself, put paid to the speculation.
MOVIES・22 DAYS AGO
purewow.com

Sofía Vergara has taken us to a whole new fashion realm (yet again) on America's Got Talent. The competition show judge has been bringing her style A-game to these new episodes, and last night's broadcast was no exception. Vergara showed up to the event in a stunning sequin Mimi dress...
BEAUTY & FASHION・18 DAYS AGO
Footwear News

You may not realize it, but there are actually a lot of really famous family connections in the entertainment industry. Consider, for instance, brothers Chris and Liam Hemsworth, sisters Beyoncé and Solange Knowles, mother-daughter Goldie Hawn and Kate Hudson, and of course, the Kardashians. But there are also a lot of family ties branching out across Hollywood (and the nation) that are lesser known, and those are some of the most interesting. In fact, there are at least 60 celebrities you probably didn’t know were related to each other, so prepare to be surprised.
RELATIONSHIPS・17 DAYS AGO

Good food. Good people. Good living. Localish is all about bringing out the good in America’s cities.