Jennifer Hudson's ex-fiance, David Otunga, celebrated Father's Day with their son David Jr. and took to Instagram to share snapshots of some lovely moments. It was amazing.

Although Hudson was very hesitant in allowing Otunga to spend some time with David after their separation, it appears something has changed, with the father-son pair spending quality time. 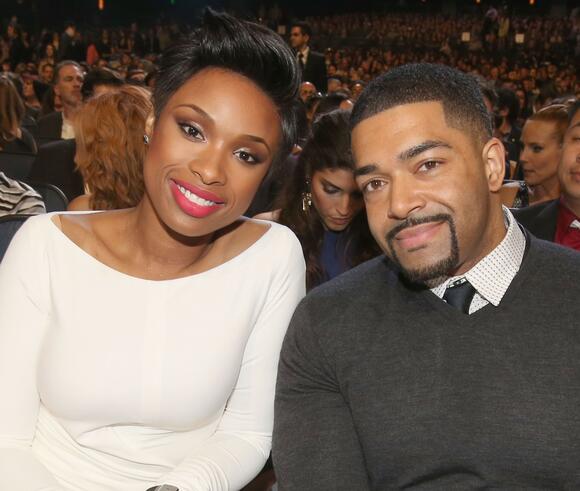 Recently, Otunga took to Instagram to share snapshots of himself and his son during the just concluded Father's Day celebrations. He gave the post a caption that read:

"My son and nieces and nephews made sure I had the best #fathersday ever! David baked me two cakes! I feel very loved. Thank you, guys!"

In the first picture, the 41-year-old looked dapper in a red sleeveless top, revealing his well-built arm. The father-of-one topped off his look with a matching cap.

The former professional wrestler posed side by side with his son, who was clad in a black short-sleeved top. Otunga looked like the perfect dad as he placed his hand over his junior's shoulder.

The next picture saw the proud dad and his 11-year-old son posing with a beautifully decorated cake. The duo were all smiles as they looked very happy in the snapshot.

[Hudson] filed a petition against [Otunga] on the grounds of mental and physical abuse towards her and her son.

The third slide was a short clip that featured the "The Call" actor taking a slice of the cake. In the video, David Jr. could be heard saying his dad gets to have the first slice of cake.

The last four images showed Otunga celebrating the occasion in grand style with other family members. They wore lovely smiles and appeared to be enjoying the amazing moment.

It remains every father's dream to celebrate special moments with family, and the on-screen star is not an exception. In 2017, Otunga celebrated Father's Day by making a movie with his son.

Speaking to Muscle and Fitness, the actor revealed the plan to make a movie started as an idea from his son as a birthday gift to him. However, what began as an idea transformed into reality, and David Jr. loved every bit of it.

Spending quality time with his son after his breakup with Hudson has been a top priority for Otunga. In 2019, he got his wish after reaching a custody agreement with his ex to share 50/50 custody of their son.

Otunga and Hudson ended their relationship in 2017 after ten years. The latter filed a petition against the former on the grounds of mental and physical abuse towards her and her son.

After a series of court battles for two years, the duo came to an agreement and have been the best parents to their son since.

Inspite of Jennifer and David not marrying. I'm glad they've maintained a respectful friendship to benefit their son David Jr. and Its important for father and son to have a close loving ❤ relationship..God bless them all!!

I'm often wonder what happened between them. It's nice he has a good relationship with their son.

The Best to them all ESPECIALLY the relationship the son has with BOTH parents! 👏

Bow Wow is sending love to all of the women in his life, starting with Angela Simmons and Erica Mena. Despite things ending on the wrong foot with Erica Mena, Bow Wow recognizes that his ex-fiancée is going through a very tough time right now as she's getting a divorce from Safaree Samuels. Her dirty laundry has been aired out for the world to see, and Bow kindly let his ex know that he's thinking of her.
CELEBRITIES・10 DAYS AGO
rachaelrayshow.com

Rachael's Husband, John, Tells Kate Hudson He Wants to Hang Out with Her Fiancé Danny Fujikawa

Rachael's Husband, John, Tells Kate Hudson He Wants to Hang Out with Her Fiancé Danny Fujikawa. Kate Hudson caught up with Rach to share updates on her summer travel, daughter Rani Rose, "Truth be Told" Season 2 with Octavia Spencer + her supplement line, INBLOOM. "You and your whole family—your...
CELEBRITIES・11 DAYS AGO
Hello Magazine

Kate Hudson has paid tribute to a dear friend who passed away with a heartfelt and emotional message. The Music actress revealed her longtime hairdresser and celebrity stylist, David Babaii, has died and her Instagram post expressed just how heartbroken she is feeling. Kate shared several fun photos of herself...
CELEBRITIES・22 DAYS AGO
Amomama

Jeannie Mai and her ex-husband, Freddy Harteis' marriage ended terribly. However, a few years after their divorce, the pair are happy after finding love again. Let's look into the circumstances surrounding their marriages. Jeannie Mai remains one of the most talked-about television presenters and stylists in America. Over the years,...
RELATIONSHIP ADVICE・14 DAYS AGO

In 2018, Michael Jordan's daughter, Jasmine, was in the news after her engagement went public. The mom of one appears to have sparked an uproar as recent posts on her Instagram story left people talking. Basketball legend Michael Jordan's eldest and look-alike daughter, Jasmine Jordan, appears to have tied the...
BEAUTY & FASHION・13 DAYS AGO
Daily Mail

Married At First Sight star Patrick Dwyer sparked rumours of a romance with former co-star Jo Todd on Monday. He shared a sweet photo of the pair on Instagram, adding a number of love hearts to the photograph. Beaming in the photo, Patrick nestled closely to the bubbly blonde barber.
RELATIONSHIPS・14 DAYS AGO
HollywoodLife

Drake Shares Cute New Photo Of Son Adonis, 3, Sticking His Tongue Out: ‘I Feel You Kid’

Drake took to Instagram to share an adorable new photo of his three-year-old son Adonis stretching his arms out and being cheeky for the camera. Drake, 34, is sharing another cute pic of his son Adonis, 3, and it’s one of the best ones yet! The rapper posted the snapshot to Instagram on Sept. 13 and in it, the curly haired cutie is sticking out his tongue while his arms are stretched out wide. He was wearing a white short-sleeved top and light denim jeans and looked as happy as could be. Check out the pic HERE!
CELEBRITIES・12 DAYS AGO
Bossip

Kate Hudson’s Son Ryder, 17, Trolls His Mom Days After She Gets Engaged — Watch

Kate Hudson is known for her health & wellness posts on social media & her son Ryder hilariously trolled her in a new video pretending to be her. It’s no secret that Kate Hudson, 42, is a health and wellness aficionado, and the actress is constantly sharing healthy tips and tricks on her social media. However, when Kate was the special guest on Late Night with Seth Meyers on Sept. 14, the host played a hilarious video of her eldest son, Ryder, 17, trolling her. In the video, Ryder pretends to be his mom as he jokingly talks about a new smoothie he’s making while Kate stood right behind him shaking her head.
RELATIONSHIPS・11 DAYS AGO
Amomama

Luenell's only daughter Da'Nelle Campbell who once attacked her mother's personality seems to have changed her position, and the duo is in good spirits and appears to be bonding like BFFs. Meet the changed daughter. Luenell is a woman of incredible talent who seems to be aging gracefully and living...
CELEBRITIES・1 DAY AGO
Amomama

"Lean on Me" star Beverly Todd who acted as Mrs. Joan Levias, experienced a tragedy that she is yet to recover from. After entertaining the joys of motherhood, the actress lost her only child—insights into the heartbreaking story and her life. Beverly Todd is a woman of distinct character and...
CELEBRITIES・18 HOURS AGO
Amomama

Running into an ex can be awkward –– especially if they're extremely well known like Jennifer Garner. Scandal alum Scott Foley, who was briefly married to the 13 Going on 30 actress in the early 2000s, says he handles run-ins with a level of respect nowadays. Foley shared with Andy Cohen during his appearance on the host's SiriusXM's show Andy Cohen Live how he tackles running into his ex at Hollywood events.
CELEBRITIES・4 DAYS AGO
The US Sun

BRITNEY Spears ex-husband Kevin Ferderline is happy that the singer is now engaged to Sam Asghari. Britney, 39, and Sam, 27, both announced their engagement in separate Instagram posts on Sunday after almost five years of dating. The Toxic singer was married to dancer Kevin for three year until 2007...
NEW YORK CITY, NY・13 DAYS AGO
Amomama

E-40 has amassed incredible fame and fortune in the music industry despite his tough childhood and addiction problems. In addition to his successful career, he is also a committed husband and a supportive father. Earl Tywone Stevens Sr., popularly known as E-40, has been in the rap game for several...
RELATIONSHIPS・3 DAYS AGO
Amomama

Lamar Odom's ex-fiancée, Sabrina Parr, took to Instagram to reveal her recent battle with ovarian cancer, adding that she kept silent all along as she had to process a lot within a short time. Fans who know Sabrina Parr would recall her as the stunning Instagram influencer and fitness coach...
CELEBRITIES・12 DAYS AGO
HipHopDX.com

Geto Boys rapper Scarface (real name Brad Jordan) was hospitalized this week following a kidney transplant. But the donor wasn’t just anyone — it was his son Chris Jordan who rose to the occasion and gave up one of his kidneys. Both Jordan men were in good spirits on Wednesday...
CELEBRITIES・11 DAYS AGO
People

Ree Drummond had some loving words for son Bryce Drummond on Friday. In honor of her first-born son's 19th birthday, the Pioneer Woman star, 52, shared a sweet tribute to Bryce on Instagram. Attached to her words were a gallery of photos of Bryce, including a photo of him as...
CELEBRITIES・9 DAYS AGO
HollywoodLife

As Brian Austin Green’s romance with Sharna Burgess continues to heat up, HL has EXCLUSIVELY learned what his ex – and mother of three of his children – Megan Fox thinks about Sharna and this romance. Brian Austin Green might feel like dancing, not just because he’s part of season...
BEVERLY HILLS, CA・13 DAYS AGO