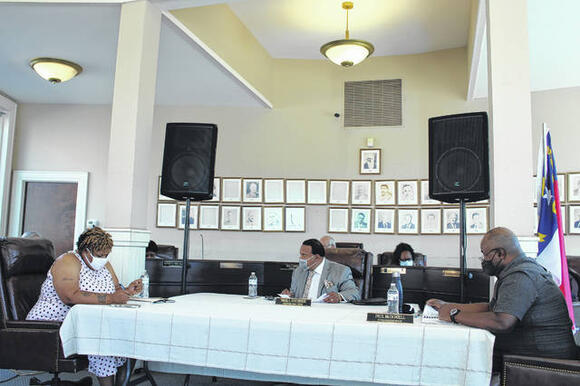 The Maxton Board of Commissioners approved a $3.5 million budget during a special called meeting held Thursday. The budget, which is for the 2021-22 fiscal year, will go into effect July 1.

MAXTON — The Board of Commissioners here approved a $3.5 million budget for fiscal year 2021-22 on Thursday during a special called meeting and agreed to move forward with raising the town’s water and sewer fees.

Two adjustments were made to the budget before the spending plan was approved Thursday.

The first was to use $7,334 of the town’s contingency funds to pay for one-stop early voting in Robeson and Scotland counties. Maxton is a dual-county municipality with a small portion of the town sitting in Scotland County and the rest in Robeson County.

Town leaders were considering opting out of early voting in Scotland County, but they were told by the North Carolina State Board of Elections the town would have to either open early voting in both counties or neither, according to Maxton Town Manager Angela Pitchford.

The cost of one-stop early voting for Scotland County would be $6,000, while the Robeson County price tag is $1,334.

“The numbers don’t add up to me,” Mayor Paul Davis said. “That don’t make any sense to me.”

About 50 of Maxton’s residents in Scotland County voted in the 2020 election, way fewer than the number of town residents in Robeson County who voted, Davis said.

“That’s not, to me, fair,” Commissioner Elizabeth Gilmore said.

The commissioners still agreed to move forward with early voting so as not to suppress the vote.

“If we don’t do it, that’s suppression of our rights,” Gilmore said.

Davis and Commissioner Paul McDowell did call for town administration to contact the State Board of Elections to clarify how the costs are tallied up.

It was decided Thursday that contingency funds will be used to increase the Robeson County Public Library’s yearly allocation from $15,050 to $17,000 to assist with the cost of daily operations. The decision was made after hearing a presentation from RCPL Director Katie Fountain and Cynthia Lester, manger of the Gilbert Patterson Library in Maxton.

“We are truly making great steps to improve library services to support your citizens, and we need additional funding … Our costs have not stayed stagnant over the last five years, but we’ve tried to keep up the best we can with the same amount of funding. ” Fountain said during her presentation.

Fountain also asked the town to donate back the $5,000 residents gave Gilbert Patterson Library’s governing board when it was in operation to assist with personnel costs for the current fiscal year. The library board gave the money to the town when the board was abolished. Fountain said the library also needs money for library beautification in the upcoming fiscal year.

The commissioners denied the request and suggested the library seek grant funding.

The town abolished the Library Board in May 2020 in order to give full operational control to the county system. After the board was abolished, all money raised by the board was given to the town.

Fountain still thanked the board for the increase in annual allotted funds.

“We’re at a crossroads where even though we don’t like to raise rates, we’re probably going to have to do this,” Davis said.

The town was considering either a 3% or 5% increase in rates.

“I feel that at this point, so we don’t have to come back and review this again, that we need to go ahead and do the 5%,” Gilmore said. “If we use the 3% and find out that our finances are not appropriate, then we’re going to have to come back to our citizens and say we need to find an increase.”

“Technically, it should be more than 5%,” Commissioner Victor Womack said.

The rate change will not be formally decided on until the board schedules a public hearing on the matter.

LUMBERTON — The City of Lumberton and two other municipal governing boards are scheduled to convene next week throughout Robeson County.
LUMBERTON, NC・18 HOURS AGO
The Robesonian

LUMBERTON — The Robeson County Humane Society held an event, Bark at the Moon, on September 29 from 6-8 p.m. at their location, 3180 Wes
ROBESON COUNTY, NC・18 HOURS AGO
The Robesonian

LUMBERTON — After a two-year hiatus because of the COVID-19 outbreak, the Robeson County Agricultural Fair returns this week and “
3 DAYS AGO
The Robesonian

LUMBERTON — Very few people are using chainsaws to cut firewood these days. But, if the price of heating fuel remains as high
LUMBERTON, NC・17 HOURS AGO
The Robesonian

LUMBERTON — Two properties, 150 and 220 Jackson Court in the shopping center anchored by Walmart and Lowes are being redeveloped, and th
LUMBERTON, NC・18 HOURS AGO

Deep Branch Elementary School Principal James Hunt has spent nearly 30 years in education and continues his work for the same reason he began:
ROBESON COUNTY, NC・18 HOURS AGO
The Robesonian

New town manager seeks to get and save money for Fairmont

FAIRMONT —No old business was addressed in a meeting that looked to the town’s future. Primary subjects of interest wer
FAIRMONT, NC・9 DAYS AGO
The Robesonian

LUMBERTON —Following a one-day postponement the Robeson Regional Agricultural Fair will open to the public on Oct 1. “R
ROBESON COUNTY, NC・18 HOURS AGO
The Robesonian

PEMBROKE — Pembroke Day has been postponed to the rain date of Oct. 6. The event will be held on the quad between Old Main and the Mary Livermore Library on the campus of UNC Pembroke. Pembroke Day began in 1990 and is one of the longest-running traditions at the university. The event is a collaboration between the Town of Pembroke and the university.
PEMBROKE, NC・2 DAYS AGO
The Robesonian

NC Farm School: Is it for You?

Have you ever considered starting your own agricultural business? Do you have land and want to finally do something with it to start making mo
ELIZABETHTOWN, NC・7 DAYS AGO
The Robesonian

Pet of the week

Coco is available for adoption at Robeson County Humane Society. The 1-year-old female pup is said to be child friendly and loves cuddles and
ROBESON COUNTY, NC・18 HOURS AGO
The Robesonian

LUMBERTON — The Carolina Civic Center Historic Theater will provide the public with a glimpsee of the plans and features of its new anne
LUMBERTON, NC・7 DAYS AGO