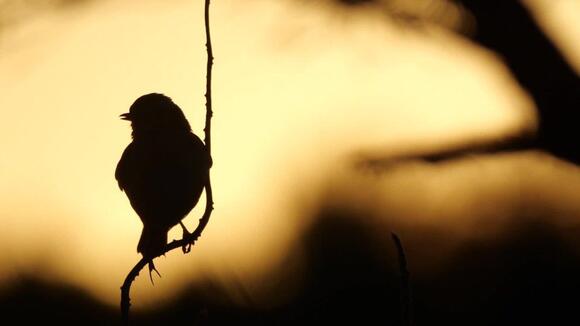 Wildlife experts and bird watchers are trying to figure out what’s blinding and even killing hundreds of birds across the U.S.

Over the past month, wildlife experts have been reporting “an unusual amount of bird mortality,” NBC News reported.

Kate Slankard, an avian biologist with the Kentucky Department of Fish and Wildlife Resources told NBC News, “We have yet to figure out what the problem is. The condition seems to be pretty deadly.”

Some of the symptoms are crusty or puffy eyes, neurological signs of seizures and an inability to stand balanced.

The birds also are acting as if they are blind and not flying away when people approach.

The Washington Post reported about birds that were showing signs of neurological issues last month.

At the time, wildlife experts didn’t know what was causing the issues mostly found in blue jays and grackles, the Post reported. Since the article was published, other birds like crows and starlings also developed the issues, WJLA reported earlier this month.

“Eye issues were reported in what otherwise looked like healthy juvenile birds, causing blindness and the birds to land and stay on the ground,” an announcement from the Animal Welfare League of Arlington said, according to the Post. “Animal Control is now seeing additional species of birds affected. Other agencies and localities across the region and state are reporting similar issues at this time.”

When a bird is found on private property, people are advised to dispose of them quickly but do not have direct contact with the carcass. If birds are found on public property, they are to be reported to officials.

Some people speculated online that people were spraying pesticides to get rid of the cicadas that blanketed the region.

Megan Kirchgessner of the Virginia Department of Wildlife Resources told The Washington Post that testing would be needed to determine if the birds were being affected by a bacteria, virus or a toxin.

Whatever is causing the symptoms, experts in Arlington told people to remove their backyard birdfeeders and birdbaths to cut down on the spread.

The same request was issued to parts of Kentucky, WKRC reported this week.

“We are asking people in the affected areas to pull in their bird feeders and baths, and wash them with a 10 percent bleach solution,” Kirchgessner told WJLA. “If it’s an infectious agent, that will kill it if it’s harbored on the feeders or birdbaths.”

What's Killing the Songbirds in Pennsylvania?

Hundreds of young songbirds have died in the last month -- and wildlife experts don't know why. A mysterious illness is causing a high number of songbird deaths across Pennsylvania, New Jersey and Delaware. Local wildlife experts first became aware of the unknown health condition in late May, and have since seen it spread throughout the area.

No One Knows What's Killing These Wild Songbirds

Something is sickening and killing wild birds in multiple states, and no one knows what it is yet. Since May, wildlife experts and officials have reported unexplained die-offs throughout the Eastern half of the U.S. So far, the only thing clear is that these cases aren’t being caused by common culprits like salmonella.

When Brian Evans heard about young birds dying at a high rate this spring, he dismissed it. The bird ecologist at the Smithsonian Migratory Bird Center in Washington, D.C., knew most hatchlings don’t survive to their first year, he tells Natasha Daly of National Geographic. However, Evans took notice when...

Mysterious Bird Disease is Killing Many

In Ohio on May 24, wildlife rehabilitator Jim Tinnell found a sick blue jay. Something didn’t feel right because, as the seasoned avian rehabilitator told The New York Times, “Blue jays just don’t come into rehab that often.”. After that first bird, more and more sick birds kept arriving into...

So you dump unwanted goldfish in a local pond to be with others of its kind. It seems harmless.Yet, such an act is anything but harmless, especially to the unwanted fish. Some time ago, an interest in this developed when the University of Idaho built ponds in the arboretum extension, part of the complex now known as University of Idaho Arboretum & Botanical Garden. The ponds are a great addition to an otherwise stellar campus resource.

For those of you who love to feed birds or have a bird bath at your home, unfortunately, you're being asked to stop and put your feeders away right now. There is now a growing concern over an increasing number of birds dying across the country, but experts do not know why.

MassWildlife: Take down bird feeders! Mysterious illness killing off birds in other states.

Songbirds in the midwest and some eastern states are sick and dying and wildlife officials don't know why. The birds are reported to be showing signs of eye swelling with a crusty discharge and neurological oddities. MassWildlife has issued an advisory for the public to take down bird feeders and...

BALTIMORE, Md. — For nature’s flying, feathered friends, bird-friendly gardens, like the one in Patterson Park in Baltimore, can offer comfort and refuge. Lately, though, some wild birds are experiencing anything but that. “They were showing symptoms, mostly having crusty eyes and neurological symptoms, too,” said David Curson, director of...

Nature conservation organizations in the region are encouraging residents to join them in following the recommendation of the U.S. Geological Survey to stop activities that cause birds to gather. These activities include pausing all bird feeding. Earlier this month we noted concerns on the part of wildlife experts regarding songbirds...

Officials in Maine are monitoring the spread of a mysterious disease that has caused blindness and death in songbirds throughout the mid-Atlantic states and Ohio Valley in recent months. But Maine biologists are not going as far as officials in Connecticut and Massachusetts, who have asked the public to take in feeders and bird baths.

Scientists are still trying to identify what has been killing an unknown number of young wild birds in several regions of the United States in the past couple of months. The die-off has slowed markedly in recent weeks, but its cause remains a mystery. In a July 9 notice, the...

PHILADELPHIA — A group of songbirds recently turned up dead in Nottingham, Chester County, Pa. But their cause of death is a mystery for scientists, wildlife officials, and bird lovers. Scores of similar bird deaths have been reported in 27 Pennsylvania counties, including Philadelphia, since June. And more and more deaths have been logged in Delaware and eight other states and Washington, D.C., stretching back to April.

BURNSVILLE, Minn. — Officials in one Minnesota city are urging residents to refrain from releasing pet fish into local waters after football-sized goldfish were pulled from Keller Lake earlier this month. According to the Star Tribune in Minneapolis, officials performing a routine water quality assessment discovered 10 oversized goldfish, some...

Afield: What’s causing the mysterious bird deaths occurring in most of Pennsylvania?

In late May, wildlife rehabilitators in and around Washington, D.C., began receiving abnormally high reports of dead or sick blue jays, starlings, grackles, robins and other songbirds. The phenomenon spread quickly, and by early July, people in 10 states, including Pennsylvania and as far west as Indiana, were seeing the same thing.

Over the past several months, there’s been an alarming wave of manatee deaths. We've already hit a record for the number of deaths, and we're only halfway through the year. The overwhelming majority has been in Brevard County, where 312 manatees have perished. Several theories have been proposed to explain...

State and federal wildlife authorities are seeking who is responsible for cutting the head and paws off a grizzly bear that may have drowned and washed up on a gravel bar in the Yellowstone River north of Gardiner in mid-June. “It could have been a purposeful take, or half innocent...

A judge has ordered an Idaho woman to pay over $5,800 for leaving trash out that attracted a grizzly bear to her campsite in Wyoming's Grand Teton National Park. The post Messy Grand Teton camp draws bear; Idaho woman fined $5.8K appeared first on Local News 8.

SAN DIEGO — High up in the mountains of San Diego County, there are meadows with creeks and streams where some of San Diego’s rarest butterflies flutter from flower to flower. But life isn’t as idyllic for the Laguna Mountains skipper as it may sound. These endangered butterflies have vanished...

Minnesota Black Bear Steals Gun From Camper, Takes Off Into The Woods

If bears start learning how to accurately use firearms, they may legitimately overthrow the human race. No telling if the bear in this story learned how to use the gun, but it was at least in possession of a gun for a period of time. There’s an obvious right to...