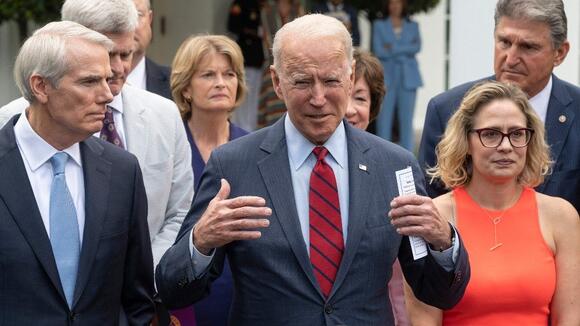 President Biden on Thursday announced he'd reached an infrastructure deal with a group of Republican and Democratic senators, saying both sides gave up some things they wanted to get a rare accord in a bitterly divided Washington, D.C.

Biden acknowledged the deal would not include proposals he's made for spending to help American families, but firmly endorsed the deal on infrastructure in unusual remarks just outside the White House with the bipartisan group of senators looking on.

“We have a deal,” Biden told reporters.

“I think it’s really important, we’ve all agreed that none of us got all that we wanted. I clearly didn’t get all I wanted. They gave more than I think maybe they were inclined to give in the first place,” he said.

“But this reminds me of the days we used to get an awful lot done in the United States Congress, we actually worked with one another,” Biden said, putting his hand on Sen. Rob Portman ’s (R-Ohio) shoulder. “Bipartisan deal means compromise.”

The agreement was reached after weeks of negotiations, and with progressive Democrats repeatedly calling on the White House to back away from the talks, which some liberals fear could prevent a much larger package from moving forward.

Biden said he did intend to continue to look for a larger package on spending through a budget reconciliation measure, which would allow it to pass the Senate with just Democratic votes.

“I appreciate the fact that the president came out today to express what we all believe, which is we didn’t get everything we wanted but we came up with a compromise that is going to help the American people,” Portman told reporters. “I’m pleased to see today we were able to come together on a core infrastructure package.”

Sen. Susan Collins (R-Maine) said that the group had agreed on a price tag, scope and how to pay for it.

It allocates $312 billion for transportation programs, including roads, bridges, airports and electric vehicles infrastructure. The remaining $266 billion would go to water infrastructure, broadband, environmental remediation, power infrastructure and other areas.

“It was not easy to get agreement on all three, but it was essential,” Collins said. “It was essential to show the American people the Senate can function, that we can work in a bipartisan way.”

Signs of a bipartisan breakthrough on infrastructure came Wednesday evening, when the group of senators emerged from a meeting with top White House officials saying that they had agreed to a framework and would meet with Biden on Thursday.

Biden, who unveiled a $1.25 trillion package to repair infrastructure and address climate change at the end of March, has sought for weeks to get a bipartisan agreement on infrastructure, after campaigning on his ability to work across the aisle and cut deals in Congress when he represented Delaware as a senator.

Democrats moved Biden’s $1.9 trillion coronavirus relief bill without GOP votes earlier this year using budget reconciliation, a process that allows them to bypass the filibuster in the Senate.

While the bipartisan breakthrough represents a significant accomplishment, Biden still faces a challenge in getting a deal across the finish line especially as he looks to convince progressives to support the deal.

Speaker Nancy Pelosi (D-Calif.) said Thursday that the House would not vote on a bipartisan infrastructure bill until the Senate passes a larger set of Democratic priorities through budget reconciliation.

Biden told reporters following remarks later Thursday that he would not sign the bipartisan infrastructure bill unless a reconciliation bill also makes it to his desk — a move that is likely to ease concerns from progressives but complicate passing both measures.

Biden and the senators emphasized that the deal was a matter of compromise, and that both sides had to make concessions in order to reach an agreement.

“We all gave some to get some because what we did was put first the needs of our country,” said Sen. Krysten Sinema (D-Ariz.), who described the bipartisan deal as an “historic investment” in the United States’s infrastructure.

Sen. Joe Manchin (D-W.Va.) called the deal a “tremendous opportunity for us to show the rest of the world that we can still get big things done in a bipartisan way.”

Sen. Mitt Romney (R-Utah) added that he is confident the bill can get through Congress, touting Biden’s support behind it.

“America works, the Senate works, and we can work together,” he said.

Happy Monday and welcome back to On The Money. I’m Sylvan Lane, and here’s your nightly guide to everything affecting your bills, bank account and bottom line. See something I missed? Let me know at slane@thehill.com or tweet me @SylvanLane. And if you like your newsletter, you can subscribe to it here: http://bit.ly/1NxxW2N.

Biden backs effort to include immigration in budget package

President Biden on Thursday unequivocally backed Democratic efforts to include immigration in the budget as a way to navigate narrow margins in the Senate. "I think we should include in the reconciliation bill the immigration proposal," Biden told reporters as he left the White House to accompany first lady Jill Biden to Walter Reed National Military Medical Center.

Top Democrat: 'A lot of spin' coming from White House on infrastructure

The leading House Democrat on infrastructure policy is leery of the message coming out of the White House as it races to rally support behind a major bipartisan spending deal. Rep. Peter DeFazio (D-Ore.), chairman of the House Transportation and Infrastructure Committee, raised serious objections Thursday to the nascent agreement between President Biden and a group of bipartisan senators, saying it does little to address climate change and that House leaders should alter the bill if it gets passed by the upper chamber.

(CNN) -- When the Senate voted Wednesday to open debate on a roughly $1 trillion infrastructure package, more than a dozen Republicans sided with Democrats to advance the legislation. The proposal, which came after weeks of negotiations between a bipartisan group of lawmakers and the White House, includes $73 billion...

The Senate voted 67-32 on Wednesday to advance the bipartisan $1.2 trillion infrastructure bill. Why it matters: After weeks of negotiating, portions of the bill remain unwritten, but the Senate can now start debating the legislation to resolve outstanding issues. It was the second time the chamber voted to invoke...

The Senate on Wednesday voted to take up one of President Biden's key national spending priorities, as 17 Republicans jointed with Democrats to vote to take up a bipartisan infrastructure bill. Among those voting to cut off debate and proceed to the bill were Republicans who helped hammer out the...

Democrats are warning that any attempts by moderates to pare down a $3.5 trillion spending package could threaten President Biden ’s top legislative priority and leave the party empty-handed. Progressive Democrats are sounding the alarm after Sen. Kyrsten Sinema ’s (D-Ariz.) warned Wednesday that she doesn’t support a $3.5 trillion...

Former President Trump is ramping up his pressure campaign over a bipartisan infrastructure package, accusing Senate Republicans of “caving” to Democrats on the deal. In a statement — his latest in a series condemning the infrastructure deal — Trump said that the proposal amounted to a “‘carrot’ for a massive socialist expansion,” allowing House Speaker Nancy Pelosi (D-Calif.) to bait Republicans into approving other parts of Democrats’ policy agenda.

On Thursday night, as President JOE BIDEN boarded Marine One, he made some news. — First, he reiterated that immigration reform should be included in the reconciliation bill. It’s a position he’s staked out before — Sarah Ferris, Burgess Everett and Laura Barrón-López first reported the White House supported the approach July 15 — but this is the first we’ve heard about it since there was movement on the bipartisan infrastructure framework. (Worth remembering: For this to happen, Dems would need a favorable ruling from the Senate parliamentarian, which hasn’t happened yet.)

The Biden administration said on Friday that it’ll take a two-step approach to decide which U.S. waters should get federal protections from pollution, returning first to pre-Obama protections. A statement from the Environmental Protection Agency (EPA) said that a “forthcoming foundational rule” would temporarily restore protections that were in place...

President Biden and Vice President Harris on Friday morning are slated to hold a meeting with governors to discuss ongoing efforts to strengthen wildfire prevention, preparedness and response efforts and hear firsthand about the ongoing effects of the 2021 wildfire season. The event is scheduled to begin at 11:45 a.m....

Trump getting tougher for Senate GOP to ignore

Senate Republican leaders have tried to put former President Trump in the rearview mirror, rarely mentioning his name and keeping focused instead on the Democratic agenda, but Trump’s iron grip on the party’s grassroots is making it tougher and tougher to keep ignoring him. Mainstream Republicans are getting increasingly caught...

How (and why) Trump hopes to 'sabotage' the infrastructure deal

The good news is, Donald Trump, preoccupied for nine months with ridiculous lies about his election defeat, is starting to focus at least some of his attention on something new. The bad news is, the former president's new interest is far from constructive. Politico reports that Trump is now trying...

Welcome to Thursday’s Overnight Health Care. Masks are back in Walt Disney World and Disneyland, with both resorts requiring face coverings for those aged 2 and older in indoor portions of the parks. If you have any tips, email us at nweixel@thehill.com, psullivan@thehill.com and jcoleman@thehill.com. Follow us on Twitter at...

On Capitol Hill, partisanship is coin of the realm. Still, a congressional probe of the Capitol riot should not be political. But House Speaker Nancy Pelosi (D-Calif.) can’t help herself. She made the probe irredeemably political by refusing to seat two prominent Republicans — Reps. Jim Jordan (Ohio) and Jim Banks (Ind.), both tireless Donald Trump apologists — who had been chosen by GOP leadership to serve on the select Jan. 6 Committee.

House Democratic leaders are scrambling to tee up a Friday vote on a bill that would extend a federal eviction ban through the end of the year with just two days before it expires. The House Rules Committee on Friday morning debated a bill from Rep. Maxine Waters (D-Calif.) to...