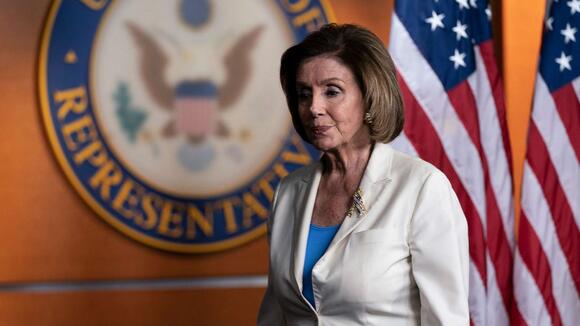 House Speaker Nancy Pelosi announced Thursday the House of Representatives will create a select committee to investigate the Jan. 6 attack on the U.S. Capitol after Republicans blocked a bipartisan proposal for an independent, bipartisan commission.

"This morning, with great solemnity and sadness, I'm announcing that the House will be establishing a select committee on the Jan. 6 insurrection," Pelosi announced at her weekly news conference.

"A temple of our democracy was attacked by insurrectionists," she said. "It is imperative that we seek the truth as to what happened."

She said, "The select committee is about our democracy, about ensuring that the Capitol dome remain a symbol of freedom."

"January 6 was one of the darkest days in our nation's history...It is imperative that we establish the truth of that day, and ensure that an attack of that kind cannot happen and that we root out the causes of it all. The select committee will investigate and report on the facts and the causes of the attack and it will make report recommendations for the prevention of any future attack," Pelosi said.

She has not yet named a chair for the committee, though aides and lawmakers have rallied around House Homeland Security Chairman Bennie Thompson as the best candidate.

Pelosi said details of the committee, which would include Republican members, will be released in the coming days. She said she hopes House Republican Leader Kevin McCarthy will appoint "responsible" GOP members to the committee.

She did not say whether or not the committee will call on McCarthy to testify about the events of the day and his phone call with former President Donald Trump. She said that's for the panel to decide, but added, "It is clear the Republicans are afraid of the truth."

Pelosi has long insisted that she wanted an outside bipartisan commission to investigate the attack but legislation to establish the commission was blocked by Senate Republicans last month. Pelosi said she will keep trying to establish a commission and noted that the 9/11 commission took 14 months to launch.

Pelosi said the select committee will take "as long as it takes" until it reaches a final report.

The committee will require a majority vote in the House to be established.

This is a developing story. Please check back for updates.

At a fund-raiser last Saturday, the Tennessee GOP’s annual Statesmen’s Dinner presented Kevin McCarthy, the House minority leader, with an oversized gavel, a nod to his dream job as House speaker. Seven months after insurrectionists breached the Capitol and explicitly targeted House Speaker Nancy Pelosi, McCarthy used the occasion to make an ugly joke about hitting her.

Republican senator Ron Johnson suggested in a private conversation on Saturday, without evidence, that the FBI knew more about the planning before the January 6 Capitol riot than it has revealed so far, according to a video obtained by The Washington Post. The comments from Senator Johnson, R-Wis., made after...

WASHINGTON — The House of Representatives is masking up again, and some people are pointing fingers at House Speaker Nancy Pelosi (D-CA). Posts with thousands of likes claim Speaker Pelosi has ordered that all House members and staff must wear masks, and if they refuse, they’ll be arrested. Meanwhile, several...

Some Democrats are calling on House GOP Leader Kevin McCarthy to resign after he said it would be "hard not to hit" Speaker Nancy Pelosi with a the speaker's gavel.

The lapse of the moratorium this weekend meant millions of tenants around the country faced the risk of losing their homes.

House Democrats to McCarthy: Apologize to Pelosi for remark

WASHINGTON -- Several House Democrats have called on House Republican leader Kevin McCarthy to apologize to House Speaker Nancy Pelosi or resign after audio surfaced of him saying at a weekend fundraiser that it would be "hard not to hit her" with a gavel if he's sworn in as speaker after the 2022 midterm elections.

Sen. Susan Collins on Sunday took issue with Speaker Nancy Pelosi rejecting two of the Republicans nominated by Minority Leader Kevin McCarthy to join the panel probing the Jan. 6 attacks on the U.S. Capitol. In an interview with CNN’s Jake Tapper, Collins claimed that she hoped the committee would be bipartisan despite McCarthy nominating Rep. Jim Jordan, R-Ohio, and Jim Banks, R-Indiana, both of whom spread the Big Lie—claiming nonexistent voter fraud—that inspired the assault that day.

Rep. Bishop on Capitol mask mandate: 'People are fed up'

WASHINGTON (SBG) - Tensions are flaring in the House of Representatives after a mask mandate was reinstated, following the CDCs newest recommendations for vaccinated and unvaccinated individuals to wear a mask in certain situations. While most Democrats are abiding by the mask requirements, some Republicans are refusing to do the same.

House Speaker Nancy Pelosi said congressional Democrats "stand ready" to work with the Biden administration to "search for ways" to extend the eviction moratorium, which expired over the weekend. The Supreme Court, in June, allowed the Centers for Disease Control and Prevention to keep its eviction moratorium in place until...

House Speaker Nancy Pelosi’s unapologetically partisan select committee on the Jan. 6 Capitol riot won’t fool anyone not already duped by her distorted narrative. The committee held its first hearing last week with emotional testimony from law-enforcement officers present at the attack, but nothing can distract from her sorry excuse for a fair investigation. And her approach is a real shame because a truly impartial understanding of the events that day, and the run-up to it, would be useful not only in preventing anything similar in the future, but also in helping tame the partisan fury (from both sides) that fueled the attack in the first place.

Speaker Nancy Pelosi praised a group of House Democrats and activists camping out on the east front steps of the Capitol in an effort to pressure the federal government to extend an eviction moratorium. Pelosi said in a statement on Tuesday that House Democrats “have galvanized a national movement around...

Jordan slams January 6 commission: If 'everything's on the table,' why can't we question Pelosi

Republican Brooks seeks immunity for Jan. 6 speech, says he was not campaigning

WASHINGTON, Aug 4 (Reuters) - Republican U.S. Representative Mo Brooks asked a federal judge on Wednesday to grant him immunity from a civil lawsuit alleging a speech he delivered to then-President Donald Trump's supporters on Jan. 6 helped incite the attack on the Capitol. In a series of court filings,...

President Biden and the White House as of Monday morning didn't respond to a statement from House Speaker Nancy Pelosi and her leadership team calling on the executive branch to extend the federal eviction moratorium, as "Squad" Democrats continued to camp on the Capitol steps in protest of the inaction from their party.

AP FACT CHECK: No, Pelosi is not out to arrest mask refusers

A member of the House Republican leadership is spreading a false accusation that House Speaker Nancy Pelosi is out to get people arrested if they refuse to wear a mask inside the premises. Pelosi does not direct law enforcement in the House, and Capitol Police officials, who do, aren’t threatening...

Give Nancy Pelosi a gold medal!

Even without crowds in the stands, it's still exciting to watch the Summer Olympics. Despite disappointments like in women's gymnastics, at least we've seen intense competition. Unlike Washington, D.C. Take the House of Representatives. In the Summer Games between House Republicans and Democrats, there's zero competition. And it all boils...