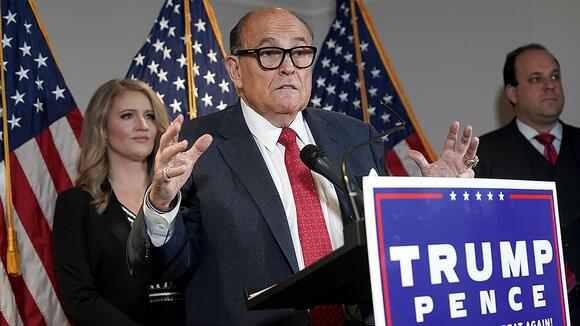 The Appellate Division of the New York Supreme Court on Thursday announced that it is suspending Rudy Giuliani ’s license to practice law in the state.

The court concluded that Giuliani made “demonstrably false and misleading statements” to courts, lawmakers and the public when he was representing former President Trump and his campaign in their failed effort to overturn the 2020 election results.

In a 33-page decision, the court said the seriousness of Giuliani's "uncontroverted misconduct can not be overstated."

It determined that Trump's former personal attorney should have his license suspended while a disciplinary action continues to be considered.

“For the reasons that follow, we conclude that there is uncontroverted evidence that respondent communicated demonstrably false and misleading statements to courts, lawmakers and the public at large in his capacity as lawyer for former President Donald J. Trump and the Trump campaign in connection with Trump’s failed effort at reelection in 2020,” the court wrote.

The court said its decision stemmed from Giuliani’s “incredibly serious” misconduct, which it said posed “an immediate threat to the public.”

“This country is being torn apart by continued attacks on the legitimacy of the 2020 election and of our current president, Joseph R. Biden. The hallmark of our democracy is predicated on free and fair elections. False statements intended to foment a loss of confidence in our elections and resulting loss of confidence in government generally damage the proper functioning of a free society,” the court wrote.

Giuliani's lawyers in a statement to The Hill called the move "unprecedented" and rejected the claim that Giuliani poses a danger to public interest.

"We are disappointed with the Appellate Division, First Department’s decision suspending Mayor Giuliani prior to being afforded a hearing on the issues that are alleged. This is unprecedented as we believe that our client does not pose a present danger to the public interest," said retired judges John Leventhal and Barry Kamins, who represent Giuliani.

"We believe that once the issues are fully explored at a hearing Mr. Giuliani will be reinstated as a valued member of the legal profession that he has served so well in his many capacities for so many years," the attorneys added.

Giuliani, in the days and weeks following the 2020 election, was one of the attorneys overseeing Trump’s legal challenges to the electoral results in a number of states.

The court added in Thursday’s decision that Giuliani’s misconduct will “likely result in substantial permanent sanctions” once the disciplinary proceedings have concluded.

Giuliani, according to the court, had argued in his defense that “there is no immediate threat of future harm” because he has and will “continue to exercise personal discipline” to refrain from discussing the matters of the election in public.

He also contended that he would not be making any additional statements about the election as a lawyer since “legal matters following the 2020 election have concluded.”

“Notwithstanding respondent’s claim that he has exercised self-restraint by not publicly commenting on the election, there are numerous instances demonstrating the opposite.”

The court also cited the Jan. 6 attack on the Capitol as evidence that Giuliani’s false statements were “corrosive” to the public’s trust in elections.

It said Giuliani’s misconduct “directly inflamed tensions that bubbled over into the events of January 6, 2021 in this nation’s Capitol.”

“One only has to look at the ongoing present public discord over the 2020 election, which erupted into violence, insurrection and death on January 6, 2021 at the U.S. Capitol, to understand the extent of the damage that can be done when the public is misled by false information about the elections,” the court wrote.

Giuliani reportedly argued that there was “no causal nexus” that linked his conduct to the Jan. 6 riots.

The court, however, contended that it does not have to illustrate a connection between the two to “understand that the falsehoods themselves cause harm," concluding that the insurrection illustrated the negative effect false statements can have on public trust in elections.

“This event only emphasizes the larger point that the broad dissemination of false statements, casting doubt on the legitimacy of thousands of validly cast votes, is corrosive to the public’s trust in our most important democratic institutions,” the court wrote.

The Hill has reached out to Giuliani for comment.

Former President Trump reportedly called his acting attorney general almost every day following his defeat in the 2020 presidential election in an attempt to push a probe into unsubstantiated claims of voter fraud, The Washington Post reported Wednesday, citing two people familiar with the conversations. The Post reported that Trump...

WASHINGTON (Reuters) - The U.S. Justice Department in a court filing on Tuesday declined to defend Republican congressman Mo Brooks in a lawsuit that alleges he conspired to instigate the Jan. 6 riot at the U.S. Capitol. The lawsuit was brought by Democratic congressman Eric Swalwell.

PHOENIX — Prosecutors need provide only a credible explanation about striking the only African-Americans from a prospective jury hearing charges against a Black woman to comply with constitutional requirements and have the guilty verdict upheld, the Arizona Supreme Court ruled Thursday. And it doesn’t require a trial judge who allows...

President Biden‘s Supreme Court commission heard Tuesday from a group of lawyers who practice before the justices and who did not have a favorable response to progressive proposals to pack the court. Maureen Mahoney, co-chair of the Supreme Court Practitioners’ Committee, told the panel in its third public meeting they...

President Trump was rightly castigated when he said that libel laws should be changed to make it harder to criticize public figures. Trump’s suggestion wasn’t just self-serving; it smacked of hypocrisy coming from a man who made wild accusations about his critics and political opponents. But Trump isn’t alone in...

Rep. Matt Gaetz (R-Fla.) said that House Select Committee to Investigate the January 6th Attack on the U.S. Capitol was created with the goal of charging Republican lawmakers with "process crimes." Gaetz made the remarks while discussing Speaker of the House Nancy Pelosi (D-Calif.) appointing Rep. Adam Kinzinger (R-Ill.) to...

Briana H. Zamora, a judge on the New Mexico Court of Appeals, will succeed retired Justice Barbara J. Vigil on the state Supreme Court, the Governor’s Office announced Friday. As an appellate court judge, Zamora has heard disputed cases from lower courts around the state since 2018. She also served...

ATLANTA - The Georgia Supreme Court has a new justice on the bench. Judge Verda Colvin was sworn in Thursday evening by Governor Brian Kemp. "There’s a lot more to Judge Colvin in my option than what we have seen on paper. She upholds, in my opinion, the highest ideals of what the people of our state expect from their judicial system. Wisdom, justice, and moderation," Kemp said. "But also compassion, belief in the rule of law, integrity, and a heart for the community she serves."

Nearly 40 maskless House Republican lawmakers walked across the Capitol and onto the Senate floor in protest of the Capitol physician’s decision to reinstate a mask mandate in the lower chamber but not in the upper chamber. Republicans complained that the policy, backed by Speaker Nancy Pelosi (D-Calif.) and other...

A top ethics watchdog is calling on the Justice Department (DOJ) to open an investigation into former President Trump and his one-time chief of staff Mark Meadows , saying the two tried to “weaponize” the department as part of a larger campaign to overturn the 2020 election results. The Citizens...

U.S. refusal to defend lawmaker in Capitol riot a signal to Trump -experts

(CNN) — The chief judge in DC's federal court questioned the Justice Department's decision to offer misdemeanor plea deals to nonviolent US Capitol rioters, saying at a hearing Thursday that the relatively light punishment might not be enough to deter similar attacks in the future. "Does the government have any...

JD Vance slams NYT reporter for calling Trump supporters ‘enemies of the state’: ‘This is disgusting’

JD Vance slams NYT reporter for calling Trump supporters ‘enemies of the state’: ‘This is disgusting’

The Justice Department Is Struggling To Bring Capitol Riot Cases To Trial: Here's Why

Early one morning in January, Suzanne Ianni peered through her window to discover two black SUVs and a police cruiser parked in front of her house. All she could think was: "Aw, they're here." While Ianni had been expecting federal agents for days, she wasn't fully prepared for their arrival...

On Capitol Hill, partisanship is coin of the realm. Still, a congressional probe of the Capitol riot should not be political. But House Speaker Nancy Pelosi (D-Calif.) can’t help herself. She made the probe irredeemably political by refusing to seat two prominent Republicans — Reps. Jim Jordan (Ohio) and Jim Banks (Ind.), both tireless Donald Trump apologists — who had been chosen by GOP leadership to serve on the select Jan. 6 Committee.