Rudy Giuliani suspended from practice of law in New York

By Aaron Katersky
Posted by
ABC News
28 days ago 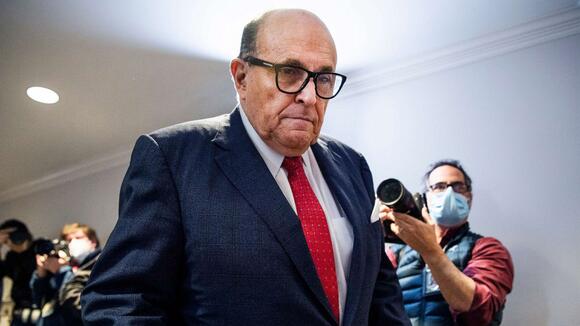 The Appellate Division of the New York Supreme Court said Thursday it was "immediately suspending" Giuliani's license -- although it is an interim suspension, so he will have an opportunity for reinstatement.

The ruling was made in response to a complaint filed by the New York Bar Association seeking Giuliani's suspension.

The New York Bar Association "has sustained its burden of proving that respondent made knowing false and misleading factual statements to support his claim that the presidential election was stolen from his client," the court's decision said. "There is uncontroverted evidence that respondent communicated demonstrably false and misleading statements to courts, lawmakers and the public at large in his capacity as lawyer for former President Donald J. Trump and the Trump campaign in connection with Trump's failed effort at reelection in 2020."

"These false statements were made to improperly bolster respondent's narrative that due to widespread voter fraud, victory in the 2020 United States presidential election was stolen from his client," the Appellate Division wrote. "We conclude that respondent's conduct immediately threatens the public interest and warrants interim suspension from the practice of law, pending further proceedings before the Attorney Grievance Committee."

Responding Thursday afternoon on his WABC-AM New York City radio show, an emotional Giuliani said, "I'm going to tell you unequivocally: I did not commit any crimes or anything close to them."

"I defended an unpopular client," he said. "I've been threatened with death for it. I've had a good deal of my income taken away. I've lost friends over it. Isn't that what a lawyer is supposed to do?"

"This is not even close to a fair decision," Giuliani said, his voice cracking.

In a statement, Trump said Giuliani was being punished for "fighting what has already been proven to be a Fraudulent Election."

"The greatest Mayor in the history of New York City, the Eliot Ness of his generation, one of the greatest crime fighters our Country has ever known, and this is what the Radical Left does to him," Trump's statement said. "It's nothing but a Witch Hunt, and they should be ashamed of themselves."

"We are disappointed with the Appellate Division, First Department's decision suspending Mayor Giuliani prior to being afforded a hearing on the issues that are alleged," Giuliani's counsel said in a statement. "This is unprecedented as we believe that our client does not pose a present danger to the public interest. We believe that once the issues are fully explored at a hearing Mr. Giuliani will be reinstated as a valued member of the legal profession that he has served so well in his many capacities for so many years."

In its ruling, the court said it could not overstate the "seriousness" of Giuliani's "uncontroverted misconduct."

"False statements intended to foment a loss of confidence in our elections and resulting loss of confidence in government generally damage the proper functioning of a free society. When those false statements are made by an attorney, it also erodes the public's confidence in the integrity of attorneys admitted to our bar and damages the profession's role as a crucial source of reliable information," the court wrote. "One only has to look at the ongoing present public discord over the 2020 election, which erupted into violence, insurrection and death on January 6, 2021 at the U.S. Capitol, to understand the extent of the damage that can be done when the public is misled by false information about the elections."

Federal investigators carried out a search warrant at Giuliani's home and office earlier this year as part of an ongoing probe led by federal prosecutors from the Southern District of New York regarding Giuliani's alleged lobbying efforts abroad during the Trump presidency, which was a key focus of the first impeachment case against then-President Trump.

Giuliani has maintained that he did nothing wrong.

Aides to former President Trump intentionally gave his then-personal attorney Rudy Giuliani the wrong time for a presidential debate preparation event last year, according to a new book. The incident is detailed in the forthcoming “I Alone Can Fix It: Donald J. Trump’s Catastrophic Final Year,” by Washington Post reporters...

Trump says of Capitol rioters who sought to overturn Biden's win: 'What I wanted is what they wanted'

Former President Donald Trump told reporters he wanted the same thing that members of the mob during the violent Jan. 6 Capitol riot wanted: overturning the election of President Joe Biden. "Personally, what I wanted is what they wanted," Trump said of the rioters, according to an article Monday in...

(CNN) — One by one, new excerpts of books about the end of Donald Trump's presidency are bringing to light appalling reports on his final year in office. In "I Alone Can Fix It: Donald J. Trump's Catastrophic Final Year," Carol Loennig and Philip Rucker show how the nation's top military leaders were poised to thwart a coup, had Trump or his allies attempted one. In "Landslide," Michael Wolff writes that as late as the morning of January 6, Trump and his former lawyer, Rudy Giuliani, may have believed the election wasn't over. And in "Frankly, We Did Win This Election: The Inside Story of How Trump Lost," Michael C. Bender depicts Trump shouting "treason!" and saying those who leaked the story about his family taking cover in the White House bunker during Black Lives Matter protests should be "executed." (Trump has already denied much of the reporting in the new books.)

The nation's top general on Wednesday responded to reports he feared former President Donald Trump would use the military after losing the election.

Former New Jersey Governor Chris Christie wanted former President Donald Trump to go on a "thank you" tour of the nation during the 2020 presidential campaign, according to a new book released on Tuesday. Pulitzer Prize-winning Washington Post journalists Carol Leonnig and Philip Rucker make the claim in their book,

Surprise! Donald Trump isn't putting his money where his mouth is on election 'fraud'

(CNN) — These two paragraphs from The Washington Post are both unsurprising and deeply troubling:. "Former president Donald Trump's political PAC raised about $75 million in the first half of this year as he trumpeted the false notion that the 2020 election was stolen from him, but the group has not devoted funds to help finance the ongoing ballot review in Arizona or to push for similar endeavors in other states, according to people familiar with the finances.

What Tom Brady Has Said About His Friendship With Donald Trump

Tom Brady's thinly-veiled swipe at Donald Trump's claims of fraud at the 2020 presidential election raised eyebrows on Tuesday—not least because the athlete and former president have long been known to be friends. As Tampa Bay Buccaneers quarterback Brady, 43, and his teammates visited the White House following their Super...

It's gone beyond whitewashing history. Ex-President Donald Trump and his House Republican enablers are now spinning fantastical inversions to hide his crimes against the Constitution on January 6.

Federal prosecutors in Brooklyn investigating Tom Barrack, a prominent ally to former President Donald Trump, for allegedly violating foreign lobbying laws had enough evidence to bring charges last year, but held off doing so until the arrival of the new presidential administration, according to people briefed on the matter.

Washington (CNN) — Former President Donald Trump in March called the crowd that had gathered for his speech before the deadly US Capitol insurrection "loving" in an exclusive audio recording obtained by CNN. "I think it was the largest crowd I've ever spoken before. It went from that point --...

Arizona State Sen. Paul Boyer has hit back at former President Donald Trump, with whom the Republican lawmaker is engaged in an online spat over the latter's continued false claims of electoral fraud and peddling of conspiracy theories. Boyer is among the Arizona Republicans calling on the state GOP to...

Bob Dole, the longtime US senator from Kansas and 1996 Republican presidential nominee, said that while he is still "a Trumper," he is "sort of Trumped out," in an interview published Thursday by USA Today.

Allen Weisselberg resigned from the top of the Trump Organization. So who’s running the company now?

Earlier this month, Allen Weisselberg — the Trump Organization’s most powerful employee not named “Trump” — resigned his post in the company’s leadership. Weisselberg had been one of two trustees at the trust that owns and controls former president Donald Trump’s company. But Weisselberg gave up that post, and dozens of others at Trump subsidiaries, after he was charged with running a tax-fraud scheme inside the company.

The chairman of the House select committee charged with investigating the January 6 Capitol riot has said he would seek testimony from Trump administration officials and possibly former President Donald Trump himself. Representative Bennie Thompson spoke to the U.K.'s Guardian newspaper in an interview published on Wednesday and said he...

Sen. Warren: Trump inaugural committee chair indictment is why we need For the People Act

Trump swamp: A look back at the criminals around Trump

In the wake of the arrest of Trump ally Thomas Barrack, here’s a reminder of some of the people surrounding Trump who were accused of, convicted of, or pleaded guilty to crimes. July 21, 2021.