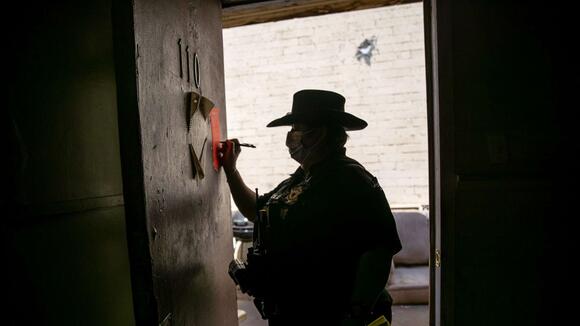 The Centers for Disease Control and Prevention on Thursday announced it has approved a 30-day extension to the eviction moratorium , prohibiting the eviction of renters who are unable to make payments more than one year after the COVID-19 pandemic took hold of the country.

The CDC said Director Dr. Rochelle Walensky has signed an extension to the eviction moratorium, which was set to expire on June 30, 2021, through July 31, 2021.

It's intended to be the final extension of the moratorium, according to a release from the CDC.

"The COVID-19 pandemic has presented a historic threat to the nation's public health . Keeping people in their homes and out of crowded or congregate settings — like homeless shelters — by preventing evictions is a key step in helping to stop the spread of COVID-19," the release said.

The White House also announced it would be extending the foreclosure moratorium for federally backed mortgages by a final month, until July 31.

"Allowing the moratorium to expire before vaccination rates increase in marginalized communities could lead to increased spread of, and deaths from, COVID-19," their letter read.

The National Low Income Housing Coalition, a non-profit focused on affordable housing, applauded the decision and what it called activation of a "whole-of-government approach" the administration is implementing.

"These actions from the White House extend an essential lifeline to millions of renters who remain behind on rent and would be at heightened risk of eviction when the moratorium expires," the organization said in a statement.

MORE: California proposal aims to pay all overdue rent for low-income tenants impacted by the pandemic

In addition to extending the moratoriums, the White House confirmed it is convening a summit of local teams to develop eviction-prevention action plans, issuing new guidance from Treasury for the Emergency Rental Assistance, or ERA, instructing the Department of Justice to send guidance on anti-eviction diversion practices, and raising awareness across agencies about emergency rental assistance, among other measures.

"One of the things we recognized in getting out the funding in when you're dealing in a post moratorium world, is that there must be in place at state and local levels, anti-eviction diversionary policies, policies that discourage or rush to evictions and encourage mediations encourage people to use the funds $46 billion that is in the emergency rental assistance," a White House official said.

The moratorium has been repeatedly challenged in court by local governments and landlord associations, which have argued the CDC overstepped its authority and does not have a mechanism for enforcing the rule. Still, more than 20 state attorneys general urged the Supreme Court earlier this month to keep the moratorium in place while those cases make their way through the courts. Local property owners and a group of real estate agents in Alabama have said the halt will "prolong the severe financial burdens" on those collecting rent payments.

Following pressure from Rep. Cori Bush, as well as Rep. Alexandria Ocasio-Cortez, the Biden administration reversed its position on Tuesday.

The temporary ban would expire on October 3 to give renters more time to tap into an emergency relief program in areas hit hard by the Delta variant.

CDC announces new 60-day eviction freeze for most US counties

The Centers for Disease Control and Prevention (CDC) announced a new 60-day eviction moratorium in counties where the transmission of COVID-19 is either “substantial” or “high.”. The order, issued by CDC director Dr. Rochelle Walensky, includes an initial expiration date of Oct. 3, but can be extended or rescinded based...

Nearly $47 billion of already approved federal housing aid issued to states has not gone to renters as the eviction moratorium ban expired over the weekend, the Associated Press reported. Now, around 3.6 million Americans could be evicted from their homes starting Monday. Democratic leaders such as House Speaker Nancy...

The Centers for Disease Control and Prevention issued a new eviction moratorium that would last until October 3, as the Biden administration sought to quell intensifying criticism from progressives that it was allowing vulnerable renters to lose their homes during a pandemic. The ban announced Tuesday could help keep millions...

Rep Alexandria Ocasio-Cortez is not taking the end of the eviction moratorium lying down, literally. The New York Democrat is one of many progressive House Democrats who is protesting the lapse in the eviction moratorium, alongside Reps Cori Bush of Missouri, Jamaal Bowman and Mondaire Jones of New York, among others. Ms Ocasio-Cortez told The Independent that Capitol Police said she and others are not allowed to formally lie down, so they have to stay sitting up.“Yeah, I mean I have a little meditation cushion I’ve been sitting on and some of us are just cycling in and out, giving...

Our View: Evictions and the virus

About a week ago, only Sussex County would not have been covered by the Centers for Disease Control and Prevention’s extension of a moratorium on Covid-19-related evictions. Over the past week, Delaware’s situation changed with an uptick in cases. It wasn’t long before New Castle and Kent joined Sussex in the orange zone that denotes “substantial” spread and now qualifies under the moratorium extension announced yesterday.

AMERICAN families will see new automatic checks hit their accounts in August. Child Tax Credit payments of up to $300 per month began to hit bank accounts in July, and another check is scheduled to go out on August 13. The credit, expanded under the Biden administration, means most families...

Former President Biden COVID-19 adviser and top epidemiologist Michael Osterholm admitted that typical paper masks are ineffective and suggested that Americans may need to switch to heavier duty N-95 masks to battle the new wave of cases in an interview on CNN Monday. "We know today that many of the...

(CNN) — Joe Biden's presidential honeymoon has officially ended, with a series of problems -- led by the ongoing surge of the Delta variant of the coronavirus -- coalescing to make the last few days some of the worst ones he has spent as president. Consider the current landscape Biden...

Biden to announce new eviction ban due to COVID spread

WASHINGTON (AP) — The Biden administration will announce a new 60-day eviction moratorium that would protect areas where 90% of the U.S. population lives. That’s according to three people familiar with the plans who insisted on anonymity to discuss the forthcoming announcement. The Centers for Disease Control and Prevention has identified a legal authority for a new and different moratorium that would be for areas with high and substantial increases in COVID-19 infections.

AUSTIN, Texas (CBSDFW.COM/AP) – A federal judge blocked Texas on Tuesday, August 3, from allowing state troopers to stop vehicles carrying migrants on the grounds that they may spread COVID-19 as worries and new cases are rising along the U.S.-Mexico border. The temporary order by U.S. District Judge Kathleen Cardone...

Retaining the House will be nearly impossible for Democrats; Trump will be the wildcard

All the bluster about controlling Federal levers of power by progressives hides a distinct nervousness. They know the window for pushing their policy agenda through Congress is about to slam shut in 2022. The rush to pass legislation and attacks on recalcitrant moderate Democrats are driven by the fear that this political opportunity may disappear for years.

DeSantis knocks reporter for question about kids in ICU

Florida Gov. Ron DeSantis (R) on Tuesday knocked a reporter who asked a question regarding if mask mandates would have helped seven kids who are in the ICU for the coronavirus. A reporter asked about seven children who are at the Joe DiMaggio Children’s Hospital and if masks could have...

Biden tells Florida, Texas leaders: Help on COVID-19 or 'get out of the way'

WASHINGTON, Aug 3 (Reuters) - U.S. President Joe Biden on Tuesday urged Republican leaders in Florida and Texas - home to roughly a third of all new U.S. COVID-19 cases - to follow public health guidelines on the pandemic or "get out of the way" as the country struggles to contain the rapid spread of the disease's Delta variant.

Thanks to Team Biden, America could soon be on the verge of economic disaster

No one knows for sure what the state of the American economy will be one year from now, but the existing evidence all points in one direction: disaster. During the widespread rollout of the COVID-19 vaccines, countless economic analysts predicted the remainder of 2021 would be marked by rapid economic growth. The most popular theory was that as the economy reopened, pent-up economic demand would lead to a surge of activity, driving expansion at a record pace.