At Least One Killed, 51 Unaccounted For After Multi-Story Building Partially Collapses In South Florida 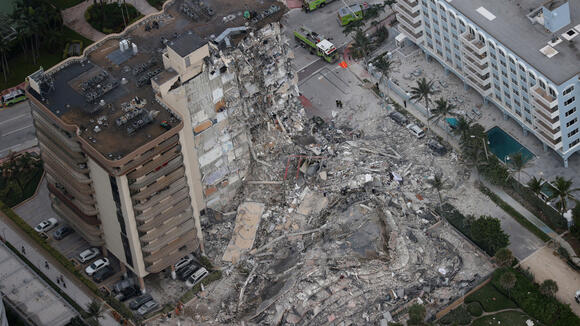 Dozens of people were unaccounted for after portions of a condo building north of Miami Beach collapsed early Thursday, killing at least one person.

HOLLYWOOD (CBSLA) — Both sides of the 101 Freeway at Sunset Boulevard were closed Wednesday night for a death investigation. Traffic was backed up for miles on the freeway and on surrounding surface streets in the area as police conducted their investigation into the death reported shortly after 9 p.m. The freeway reopened shortly after 10 p.m. SIGALERT CANCELLED: S/B US-101 AT SUNSET BLVD, ALL LANES OPEN – REF LAPD# 4694 — CHP_LA_TRAFFIC (@CHP_LA_TRAFFIC) July 29, 2021

Family Of Man Shot, Killed By CHP In 2020 Sues City of Long Beach, State Of California

LOS ANGELES (CBSLA) — The city of Long Beach and the state of California are getting sued in a wrongful death case involving an allegedly armed man killed by California Highway Patrol on the 710 Freeway. 31-year-old Ruben Escarrega was shot at about 11:30 p.m. on May 7, 2020. Police were called with reports of a man walking along the freeway that night. When they approached him, he allegedly refused to drop a knife, leading to CHP opening fire, killing Escarrega. The family of Escarrega filed the lawsuit on Wednesday in Los Angeles federal court, claiming civil rights violations and they’re seeking unspecified damages on behalf of Escarrega’s mother and minor son. They accuse officers of waiting too long to give medical care to Escarrega and allege he posed no immediate threat. CHP did not comment on the case, citing pending litigation. The city of Long Beach has also not yet responded to a request for comment. (© Copyright 2021 CBS Broadcasting Inc. All Rights Reserved. City News Service contributed to this report.)

LOS ANGELES (CBSLA) — A man is dead after apparently being shot, then crashing into a building in the Venice area, authorities said Tuesday. (credit: CBS) The crash happened at about 10:30 a.m. at the Westminster Dog Park in the 1300 block of South Pacific Avenue, according to Margaret Stewart of the Los Angeles Fire Department. The vehicle went over an embankment, rolled over onto its side and ended up against the side of a building. A man was first reported to be trapped in the vehicle but was later pronounced dead at the scene. Crews are working to recover the body. The man, who was not identified, was found with gunshot wounds. A gun was also found inside the vehicle. Investigators are trying to determine whether the fatal crash is linked to a drive-by shooting that happened a few blocks down the street. A car at that scene has bullet holes, and the driver — who was not hurt — is talking to police. It’s unclear if there was a third vehicle involved, or if the driver who died may have been the shooter who ended up crashing. Much of the area around Pacific and Westminster Avenue was shut down for the police investigation.

SWAT Standoff In Echo Park After Body Is Found Inside Home

LOS ANGELES (CBSLA) — A body was reportedly located inside an Echo Park home on Tuesday night, leading to an LAPD investigation. That individual’s cause of death was unknown. Police were still trying to get inside the home on Douglas Street around 10 p.m., which turned the incident into a barricade situation. There were two individuals inside who refused to let authorities in. No further details were immediately available.

ECHO PARK (CBSLA) — People are back out having fun on the swan boats and getting soaked under the fountain at Echo Park Lake, but is it safe? A David Goldstein investigation found high levels of E. coli bacteria in Echo Park Lake. (Photo by Michael Tullberg/Getty Images) Back in March, the Los Angeles Police Department removed hundreds of unhoused residents from the park before closing it for repairs and cleaning. The encampment had grown during the pandemic and, without enough restroom facilities at the park, the lake was often used as a toilet. A report produced by the city and obtained by...

SANTA MONICA (CBSLA) – A search was suspended Monday morning for a woman who may have gone missing in the ocean waters near the Santa Monica Pier. July 25, 2021. (CBSLA) The U.S. Coast Guard reported that a woman was seen at clinging to the pilings underneath the pier at around 9 p.m. Sunday, prompting a search and rescue effort. The Coast Guard actively searched the waters Sunday night with rescue divers, two boats and a helicopter with assistance from several other agencies, including the Santa Monica fire  and police departments and the Los Angeles County Fire Department. July 26, 2021. (CBSLA) The search temporarily resumed Monday morning. However, at around 10 a.m., the L.A. County Fire Department Lifeguard Division tweeted that the search had again been suspended “pending more information.” The missing woman’s identity was not known. Santa Monica police have not yet received any reports of a missing person which may have matched her description. #PierIC *Update* The search has been suspended pending further information. Land based Lifeguard Units and Lifeguard Rescue Boats will continue periodic patrols. — LACoFD Lifeguards (@LACoLifeguards) July 26, 2021

NEWPORT BEACH (CBSLA) — Officials in Orange County are working to get rid of aggressive non-native algae spreading in Newport Bay. Caulerpa Prolifera is known to be harmful to marine life through lost habitat, according to Orange County Coastkeeper, an organization that protects the region’s coast, rivers and streams. The algae can grow quickly and is native in Florida and other tropical and subtropical areas. Coastkeeper experts said Caulerpa Prolifera and other algae like it have a history of causing significant damage to California’s waters, along with the Mediterranean and Australia. “Allowing any species of this algae to become established and spread within California is likely to result in considerable economic, recreational and biological impacts,” according to a statement issued by Coastkeeper. “The hope is that it can be removed swiftly and not get established in other areas.” (© Copyright 2021 CBS Broadcasting Inc. All Rights Reserved. City News Service contributed to this report.)

SEAL BEACH (CBSLA) – A 35-year-old crew member of the Sea Queen II, a 100 foot commercial fishing vessel, went missing Saturday. The U.S. Coast Guard and other agencies were searching for the man, described as Asian and wearing a red sweatshirt and black sweatpants, in the ocean waters off of Sunset and Seal Beaches. He was last seen at around 2 a.m. when the boat was anchored in the area being searched, according to the Coast Guard. No other details were immediately available. (© Copyright 2021 CBS Broadcasting Inc. All Rights Reserved. City News Service contributed to this report.)

LOS ANGELES (CBSLA) – An LA County inmate who walked away from a minimum-security camp near Sacramento Saturday was apprehended Sunday. Staff discovered 25-year-old Edgar Benitez missing from his assigned housing at the Growlersberg Conservation Camp in El Dorado County Saturday night around 11 p.m., according to the California Department of Corrections and Rehabilitation. Authorities immediately conducted a search of the grounds. The state Department of Corrections and Rehabilitation’s Office of Correctional Safety said he was found in front of a Modesto home at 4:30 p.m. Sunday. Benitez, who was received from LA County on December 26, 2017, was sentenced to nine years for driving under the influence causing bodily injury or death. He will be taken to transported and rehoused at Sierra Conservation Center and his case will be referred for consideration fo charges, corrections officials said.