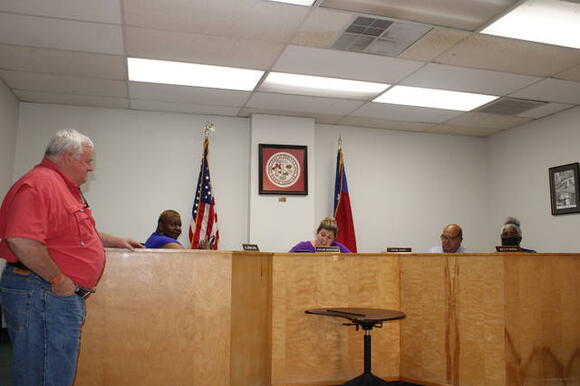 The Rowland Board of Commissioners approved a $1.7 million spending plan, presented by Town Clerk David Townsend, during the workshop meeting held Wednesday. Tomeka Sinclair | The Robesonian

ROWLAND — A $1.7 million budget for fiscal year 2021-22 that keeps property taxes unchanged but does increase water and sewer fees was approved Wednesday by the town Board of Commissioners.

The budget approved during a special workshop meeting was the fourth draft and was not met by arguments of objections from residents at the meeting.

Commissioner Paul Hunt did request that a concern about salaries in the budget be discussed during closed session. However, no changes were made to the proposed budget after commissioners returned to open session.

The spending plan, which totals $1,773,700, is a $300,000 increase from the previous year’s budget, which was frugal because of the possibility of a decline in revenue as a result of the COVID-19 pandemic.

As done in the past two years, the town will increase water and sewer fees by $1 for residents. This means a resident who receives water, sewer or solid waste services will see a $2-a-month increase in fees.

“This does not include the sold waste,” he added

The town is also increasing the water overage rate from .231 cents to .365 cents for residents who exceed 2,000 gallons.

“That rate has been the same for over 10 years,” Townsend said.

The fee increases and rate change are part of the town’s five-year plan to slowly increase the fees to the state’s average. By raising the rates to the state average, it places Rowland in line to receive grants to fund repairs to or to replace aging town facilities.

The approved budget does not include a property tax increase, keeping the tax rate at 79 cents for every $100 in property value.

“This year’s budget, I think will be a whole lot smoother and cleaner,” Townsend said.

Also Wednesday, Police Chief Charles Graham told commissioners he has sent letters to law enforcement agencies throughout the state, asking if they had vehicles they wished to donate or sell at discounted prices to the department.

“We’ve got a couple of responses, and we’re going to see what that generates,” he said.

LUMBERTON — After a two-year hiatus because of the COVID-19 outbreak, the Robeson County Agricultural Fair returns this week and “
ROBESON COUNTY, NC・2 DAYS AGO
The Robesonian

FAYETTEVILLE — The Chemours Company is expanding its plant in northern Bladen County and some concerned residents said this will have a
CUMBERLAND COUNTY, NC・10 DAYS AGO
The Robesonian

NC Farm School: Is it for You?

Have you ever considered starting your own agricultural business? Do you have land and want to finally do something with it to start making mo
ELIZABETHTOWN, NC・6 DAYS AGO

LUMBERTON — The Carolina Civic Center Historic Theater will provide the public with a glimpsee of the plans and features of its new anne
LUMBERTON, NC・6 DAYS AGO
The Robesonian

HAVANA — As Hurricane Ian tore into western Cuba on Tuesday as a major hurricane, Robeson County officials were keeping a close watch on
ROBESON COUNTY, NC・2 DAYS AGO
The Robesonian

Talan Covington, 13, killed his first deer of the season while hunting Saturday on Youth Day. The deer was taken in the Barnesville area in Ro
ROBESON COUNTY, NC・2 DAYS AGO
The Robesonian
THUMBS UP: The price of gasoline continues to drop at local stations, a good sign that will allow residents some relief in th
ROBESON COUNTY, NC・9 DAYS AGO

PEMBROKE — Pembroke Day has been postponed to the rain date of Oct. 6. The event will be held on the quad between Old Main and the Mary Livermore Library on the campus of UNC Pembroke. Pembroke Day began in 1990 and is one of the longest-running traditions at the university. The event is a collaboration between the Town of Pembroke and the university.
PEMBROKE, NC・1 DAY AGO
The Robesonian

LUMBERTON — Drivers found mostly lower gas prices on Friday in Lumberton and Robeson County. Gas could be found in the greate
ROBESON COUNTY, NC・13 DAYS AGO
The Robesonian

LUMBERTON — The Public Schools of Robeson County Board of Education adopted the District Mental Health Plan on Tuesday, which includes r
LUMBERTON, NC・13 DAYS AGO
The Robesonian

Mothers teach us lots of things. Mine taught me to vote. From my earliest memories, I recall my mother serving as an election judge
ROBESON COUNTY, NC・13 DAYS AGO
The Robesonian

RALEIGH — BIOPHIL Natural Fibers, a manufacturer of organic raw materials, is set to establish a new processing operation to in Lumberto
ROBESON COUNTY, NC・15 DAYS AGO
The Robesonian

LUMBERTON — A favorite cooking competition at the 76th Robeson County Regional Agricultural Fair is back thanks to Mountaire Farms.
LUMBERTON, NC・6 DAYS AGO