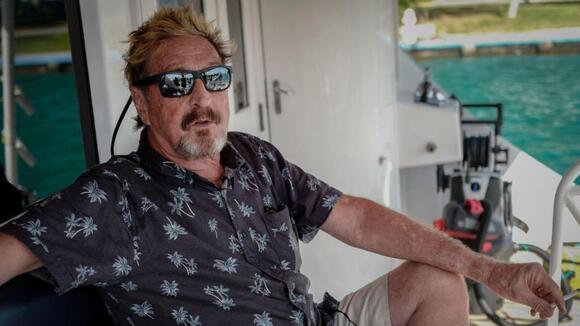 John McAfee has been found dead in a Spanish prison hours after a court approved his extradition to the US.

PAHRUMP, Nev. (KLAS) — Three people are in custody as part of an investigation into a homicide in Cathedral Canyon, Nye County sheriff’s deputies say. Deputies say Roy Jaggers, 27, of Las Vegas, was found dead at the canyon on Sunday morning, but specifics about the incident were not released.

LINCOLN, Neb. (AP) - A Nebraska man who crashed his car last year, leading police to find his fake passport among the wreckage, has been sentenced to federal prison. The Grand Island Independent reported Monday that 31-year-old Jesse Chase Swartz, of North Platte, was sentenced to 15 months in prison for possession of a fraudulent passport. Prosecutors say Swartz’s fraud was discovered on July 29, 2020. when his vehicle crashed and rolled on Interstate 80 in Hamilton County.

BESSEMER, Ala. (WIAT) — Authorities are asking for the public’s help locating the family of a Bessemer man who was serving life for a 1988 capitol murder conviction. Richard Edwards, 83, of Bessemer, was an inmate incarcerated at William Donaldson Correctional Facility serving a life sentence for a 1988 capitol murder conviction out of Mobile County. Edwards was found unresponsive by infirmary staff where he was being treated for significant natural disease.

The leader of a group that helps people flee persecution in Belarus was found dead in a park near his home in Ukraine early Tuesday, prompting police to launch a murder investigation. The body of Vitaly Shishov, who led the group Belarusian House, was discovered hanged in a park, police...

Minnesota AG Keith Ellison asked the judge to remove language suggesting girls who witnessed Floyd's murder were responsible for their own safety.

Woman Allegedly Kills Husband, Flees To Mexico Where She Is Shot By Authorities

While an alleged killer made it to the border of Mexico after the murder of her husband, she didn’t exactly escape. Jacob Ledward, 24, was murdered in May in Odessa, Texas; his body was found after police conducted a welfare check on him, the Midland Reporter-Telegram reported in May. The details of his death are unclear.

Former movie producer Harvey Weinstein, 69, was released from a New York prison Tuesday, where he is serving a 23-year sentence after being convicted for rape, to be extradited to California to face more sexual assault charges. "The opportunity to hold Weinstein accountable for his actions in California gives voice...

LISTEN LIVE. LIKE US ON FACEBOOK. FOLLOW US ON TWITTER. A woman is dead after being shot 4 times in Clayton County, Georgia and police say it’s all because her boyfriend’s unemployment password did not work. Since the pandemic started, we’ve seen people arrested for PPP schemes after earning millions...

An Oklahoma woman has been charged with murder for allegedly running over her husband with an ATV. The Pottawatomie County Sheriff’s Office was called to the scene at Soggy Bottoms ATV Trails at about 9:30 p.m. Saturday night after a 911 caller said a “girl was screaming saying her dad was dead.”

Wealthy businessman's daughter, 24, flew 3,500 miles from New York to give evidence against 'stalker' who left her 'terrified and almost helpless' only for trial to be put off for four months

A wealthy businessman's daughter flew 3,500 miles from New York to give evidence against her alleged stalker - only to see the trial adjourned for four months. Honor Weatherall, 24, claims she felt 'terrified and almost helpless' after being stalked by Alexander Rodrigo Kaliszewski, 34, for eight months, between January and August last year.

Millionaire Hires 2 Hitmen To Kidnap & Torture Estranged Wife. They End up Drowning Instead.

A Louisiana man pleaded guilty on Monday, years after devising a kidnap-for-hire plot targeting his estranged wife that ended with his two hitmen drowning. According to The Advocate, Lawrence Handley, 53, pleaded guilty to second-degree kidnapping and attempted second-degree kidnapping. Handley was under the influence of methamphetamine and cocaine in 2017 when he paid Sylvester Bracey and Arsenio Haynes, both 27, to kidnap his estranged wife as the pair were mired in a contentious divorce.

The Capitol police officer who testified he was called a 'n-----' during the Jan. 6 riot says he's since been targeted with racist abuse online

US Capitol Police Officer Harry A. Dunn says he's faced racist abuse through Facebook, Twitter, and email since testifying on the Capitol riot.

A rapist has been convicted 46 years after he attacked a babysitter after DNA evidence proved he is the father of the victim's child. Carvel Bennett, aged 74, is due to be sentenced on Tuesday after being found guilty of rape following a three-day trial at Birmingham Crown Court. Bennett...

Police have confirmed “several casualties” from a shooting incident outside the Pentagon on Tuesday. The building, which acts as headquarters for America’s armed forces, was locked down after multiple shots were fired at the Pentagon Transit Center. Woodrow Kusse, the Pentagon Force Protection Agency’s chief of police, provided more details...

The Skelton brothers have been missing since Thanksgiving Day 2010 and their father, the man responsible for their disappearance, may soon be free. It's hard to believe that it has been so long since three Michigan brothers were last seen. Even more unbelievable is their father was the last known person to be with Andrew, Alexander, and Tanner Skelton. John Russell Skelton was sentenced in 2011 to 10-15 years in prison on three counts of unlawful imprisonment in the disappearance of his three sons. Last year John was up for parole and it was denied.

Zach Alam, an accused Capitol rioter, is looking to represent himself in court and, working as his own attorney, made an offer to the court to drop the charges against him or have prosecutors "make me a counteroffer." Alam allegedly entered the Capitol on January 6, screamed "f--- the blue"...

The suspect charged with opening fire on two people on a date inside a California movie theater was accompanied by three friends who snuck out of the cinema over fears that he brought a gun, according to local reports. The friends of Joseph Jimenez told authorities he was acting strange...

A man who was charged after storming the U.S. Capitol on Jan. 6 was turned in by his co-workers who said he bragged about his experience participating in the attack. Donald Smith was arrested on Thursday and charged with knowingly entering or remaining in a restricted building without authority, disorderly and disruptive conduct in a restricted building, violent entry and disorderly conduct on Capitol grounds and parading, demonstrating or picketing in a Capitol building.

Professional skateboarder Terry Kennedy has been charged with first-degree murder after a man he allegedly attacked in an Illinois motel succumbed to his injuries, the DuPage County State’s Attorney told Fox News on Tuesday. The 36-year-old athlete first appeared in court on Monday for a bond hearing on the new...

"There's nothing more American than charging a Black man in his own attempted lynching." Black man says 2 white men attacked him, was himself charged then

A Black man in Indiana who accused two white men of attacking him last year and then was himself charged in connection to the incident is calling for the special prosecutor on the case to resign. Vauhxx Booker, a local activist who lives in Bloomington, accused Sean Purdy and Jerry...