Britain shows Biden how to deal with Russian aggression 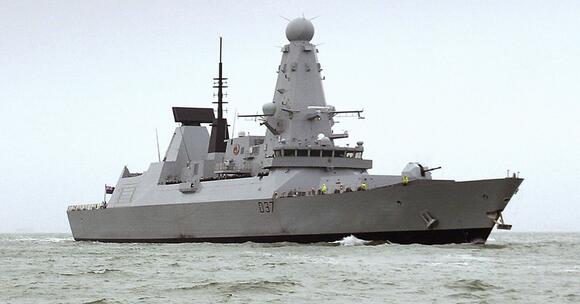 The British government remains far too comfortable with the presence of Russian illicit finance on its soil. However, on Wednesday, Britain educated the Biden administration on how to deal with Russian aggression.

The lesson came via the Royal Navy's deployment of its Type-45 air defense destroyer, the HMS Defender, within 12 nautical miles of the Crimean coast. Twelve miles marks the delineation point between international waters and sovereign waters. Since its military seizure of Crimea in 2014, Russia has asserted that the territory is Russian. Put another way, that the 12 miles of water surrounding Crimea are as Russian as the 12 miles of water off Vladimir Putin's home city, St. Petersburg. The point of this naval deployment was to reinforce the British government's, and international community's, contention that Crimea is Russian-occupied Ukrainian territory. It's a point that requires emphasis.

After all, the Biden administration has shown distinct weakness in contrast to the British action. The Biden administration recently canceled a U.S. Navy deployment into the Black Sea for what one official told Politico was "a 'myriad' of reasons, including a desire not to provoke Moscow during a delicate time."

You won't hear it from many other U.S. media publications, but this appeasement reflects President Joe Biden's recent pattern of weakness toward Putin. It's a pattern that has encouraged the European Union's natural impulse for similar weakness (the EU on Wednesday called for a summit with Moscow). Unfortunately, Biden's delusion is strategic in nature. The White House appears to believe that it can forge greater stability in U.S.-Russia relations by compromising with Putin in the face of Russian escalation. This belief is utterly delusional — one might just as soon convince the average Russian to drink whiskey instead of vodka. It will consolidate rather than cool Putin's instinct to seize the initiative. It will also bring Biden domestic political difficulties when more becomes public on just what Putin has been up to in recent years.

The British deployment allowed the HMS Defender to test its advanced Sea Viper air defense system successfully under intense, near-battle conditions. Infuriated by the Defender's transit, Russian military and coast guard forces swarmed it with ships and aircraft, and I am told that the Defender was able to track all Russian forces at all times during its transit successfully. The Royal Navy will likely share with the U.S. Navy its radar and sonar data and its monitoring of Russian tactical decisions. The United States will be particularly interested in the data because China's People's Liberation Army-navy and Army-air force would likely employ air-saturation strike tactics during any South China Sea conflict.

Ultimately, today's top line is twofold. At a specific military level, Britain has shown that it can still rule the waves against powerful adversaries. At a political level, Britain has reminded Putin that it will defend the liberal international order. And in that same vein, it has offered Biden a lesson on how to lead.

Frank Luntz, a Republican communications specialist and pollster, shrugged of any criticism for assisting the President Joe Biden's administration with its efforts to improve COVID-19 vaccine outreach and encourage U.S. residents to get the shots.

No, Biden isn't secretly policing your texts — but both parties have been reading some for years

VLADIMIR Putin has bragged his war machine can now deliver an "unpreventable strike" against its enemies as he paraded his naval might. The Russian strongman’s boast comes days after military officials announced tests of advanced new hypersonic weapons — from an arsenal Putin has described as "invincible". Putin's chilling warning...

Russian President Vladimir Putin has directed the construction of two new so-called “Doomsday” planes that would function as command and control centers in the event of a devastating nuclear conflict. The aircraft are meant to ferry Russia’s top leadership to safety in the event of an attack and allow them...

VLADIMIR Putin plans to build two new ‘Flying Kremlin' planes which he will use to rule Russia from the skies during a nuclear war. A source in the military said the adapted Ilyushin 96-400M’s, would be designed to allow the Russian leader to control troops and missiles during any form of apocalypse.

A joint statement by Russia and Syria argued that "an illegitimate stay in Syria of foreign military contingents...impedes stabilization in occupied areas," and China issued "unwavering support for Syria's efforts to safeguard its sovereignty, independence and territorial integrity."

Russia has been banned from competing in the Tokyo Olympics because of state-sponsored doping violations, but Russian athletes are still competing.

The Russian navy has the resources to launch an “unpreventable strike” if necessary should it detect “enemy” activity, Russian President Vladimir Putin has warned. The Russian president issued the warning during the annual Navy Day parade in St. Petersburg on Sunday, adding that the Russian navy can detect enemy movements whether on land, sea, or in the air, Reuters reported.

‘An explosion is coming’: Biden races to unite allies against China

The US president is being much tougher than expected on Beijing, but a lack of solidarity will undermine his policy’s success

President Joe Biden is dropping into the country's intelligence hub this week, but the excursion has not been scheduled to take a direct dig at former President Donald Trump, according to the White House.

President Joe Biden is full of compassion for Hispanics fleeing their home countries — with one exception, that is: liberty-loving Cubans. The president is abandoning practically all controls on the southern border. Despite mouthing the words “Do not come,” the White House has adopted policies that send a clear, contrary message: “Cross illegally, and you can stay.” At the same time, Biden is slamming the door on Cubans setting sail for Florida to escape a Communist dictatorship. These anti-Communists aren’t the kind of Hispanics that Democrats like.

Biden wants Putin to behave. So why not go after his money?

Kremlin critics say the U.S. president needs to do more than take incremental measures. But insiders warn that aiming for Putin’s pocketbook could be dangerous.

Afghan Air Force pilots have run out of laser-guided weaponry due to the sudden loss of support from the United States and NATO after President Joe Biden decided to exit Afghanistan, according to a senior Afghan lawmaker.

Russian President Vladimir Putin boasted about Russia’s nuclear-capable hypersonic weapons on Sunday during a large-scale parade for the Russian Navy in his hometown of St. Petersburg. Putin said, “Russia, in the shortest possible time, took its rightful place among the leading maritime powers, went through a colossal path of development...

The US has a Nord Stream 2 agreement, but still lacks direction on Russia

With Washington and Berlin having come to an agreement on the future of the Nord Stream 2 pipeline, the absence of a coherent strategy towards Russia is becoming readily apparent. While there are numerous tactical and operational level activities taking place, such as attempts to frustrate the construction of the pipeline, these efforts are disconnected from a politically viable strategic outcome that recognizes the realities in and perspectives of Moscow — and America’s limited ability to affect either — as well as the geopolitical realities evidenced by Europe’s reliance on Russian energy.