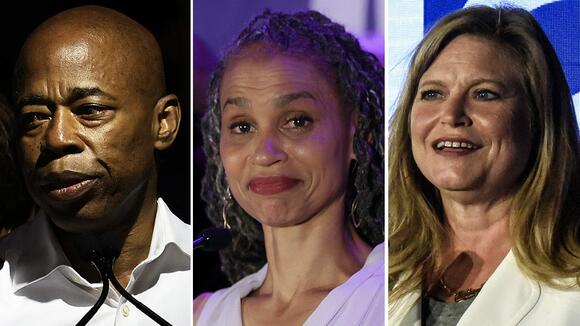 As of noon Wednesday, Adams, a former police captain, had roughly 32 percent of the vote in the multicandidate field, with civil rights lawyer Maya Wiley almost 10 percentage points behind him and former Sanitation Commissioner Kathryn Garcia a close third.

The winner of the Democratic primary will be the odds-on favorite to succeed outgoing Mayor Bill de Blasio (D).

The city is using ranked-choice voting for the first time — a practice which, coupled with an extended deadline for the return of absentee ballots, means it could take weeks before the final outcome is known.

But there are big lessons to be drawn from the results so far.

Adams’s lead has one primary cause — his claim to be the best candidate to curb the city’s spiking violent crime rates.

Several polls in the closing stretch showed crime to be the top concern for voters. That’s hardly surprising given the city’s murder rate soared 45 percent in 2020. Homicides continue to rise; the latest figures show a 13 percent jump compared with the same period last year.

Adams served for more than 20 years in the New York Police Department and, before that, the city’s transit police. He has made a political virtue out of his disdain for the “defund the police” movement, casting it as an irresponsible cause advocated mainly by well-off white leftists.

He has frequently made the argument that working-class communities suffer the most when crime rates rise — and that those communities want to see smarter policing, not less of it.

Adams can simultaneously position himself as tough on crime and cognizant of police excesses. A Black man who has described being beaten by police in his teens, he was later the co-founder of a group within the police department that pushed for reform.

There were other factors that helped power Adams’s rise, including his existing base of support as Brooklyn borough president and endorsements from other elected officials.

But his approach on policing and crime — and his biographical strength on those topics — was what made the difference.

Frustration for the left

New York is seen as one of the left’s strongholds, but there hasn’t been a whole lot to celebrate for progressives in the preliminary mayoral results.

Wiley, the left’s standard-bearer, ran a decent race but is well-behind Adams.

It’s not impossible for her to overcome his lead, but she would need absolutely everything to break her way — including staying ahead of Garcia as lower-ranking candidates are eliminated, which is by no means certain.

There are some caveats to big, generalized conclusions.

The left was slow to coalesce behind Wiley. Stringer, the early favorite among many progressives, had his chances torpedoed by fiercely disputed allegations of sexual misconduct. Morales’s campaign imploded amid internal ructions.

Rep. Alexandria Ocasio-Cortez (D-N.Y.) endorsed Wiley early this month, which appears to have delivered a shot of momentum — but likely not enough.

The left points to strong performances in lower-profile races, including from Brad Lander, who was backed by Ocasio-Cortez and Sen. Elizabeth Warren (D-Mass.). Lander is almost sure to win the Democratic primary for city comptroller.

The biggest pleasant surprise for the left on Tuesday came almost 400 miles from New York City, where socialist candidate India Walton scored an upset win against a center-left incumbent in the primary for mayor of Buffalo, N.Y.

Still, the New York City mayor’s race was the biggest contest of the night, and it was a disappointment for progressives.

It isn’t just that Wiley appears to have come up short. Of the four top candidates, three are centrists. That’s a poor showing for the left by any standards.

Celebrity has its limits — even in New York

Businessman Andrew Yang led polls for months in the mayoral contest. The renown from his 2020 presidential run, as well as an ardent Twitter following, helped sustain that lead — until the crunch came.

Yang was the first major candidate to concede on Tuesday evening, as returns showed him well behind Adams, Wiley and Garcia, garnering only about 12 percent of the first preference votes.

“You all know I am a numbers guy,” he told supporters. “I am not going to be the next mayor of New York City based upon the numbers that have come in tonight.”

Yang had sought a late boost by campaigning with Garcia and encouraging his supporters to make her their second choice. But Garcia notably did not reciprocate even while standing alongside Yang, and the businessman faded to a worse-than-expected showing.

It was a reminder that fame has its limits, even in New York.

The elite vs. non-elite divide is real

New York has all kinds of fault lines even among Democrats, as a granular look at local voting patterns demonstrates.

The single most striking difference showed up in the patterns of support for Garcia.

The former sanitation commissioner won the coveted endorsement of The New York Times and presented herself as a competent manager rather than a glitzy or ideologically dogmatic choice.

But the limitations of that approach were plain. Befitting a Times favorite, she ran up big margins in some of the wealthiest districts of Manhattan. But she got crushed in many of the city’s poorest, outer-borough neighborhoods.

Garcia swept the Upper West Side and Upper East Side, for example — strongholds of the city’s elites. But she was reduced to single figures, and often ranked outside the top four candidates, in swaths of East New York, the South Bronx and the farther reaches of Queens.

Adams, meanwhile, built his lead on commanding margins of victory in many of those same areas.

Wiley, for her part, ran strongest in areas where younger, left-leaning and affluent voters have a significant presence, including Manhattan’s East Village and the fashionable Brooklyn neighborhoods just across the East River.

A test for ranked-choice voting

The decision to go to ranked-choice voting — a system under which voters could choose up to five candidates in order of preference — was one of the big stories of the primary.

It was, of course, controversial. Adams and his allies reacted furiously to the loose alliance between Yang and Garcia in the final days, though accusations that the duo’s tactics amounted to voter suppression in turn incited criticism for being so hyperbolic.

The main drawback of the new system is the long delay in arriving at a final result.

But advocates say ranked-choice voting has a better chance of producing a winner that a plurality of voters find acceptable.

Adams is the strong favorite to win, but the temperature of the debate over the new voting method will soar again if Garcia or Wiley were to somehow edge him out in the end.

TOKYO, Aug 1 (Reuters) - Simone Biles will not compete in Monday's floor exercise final, leaving her with just one more event to win another medal at the Tokyo Games. USA Gymnastics said on Sunday that Biles had withdrawn from the event final for floor and would make a decision later this week on the beam, the one remaining event she is qualified for at this Games.

WASHINGTON, Aug 1 (Reuters) - A COVID-19-related U.S. government ban on residential evictions expired at midnight Saturday, putting millions of American renters at risk of being forced from their homes. Despite a late push by President Joe Biden amid the raging Delta variant, the U.S. Congress failed to vote on...

The young man had been on life support since being shot.

TOKYO (AP) — Caeleb Dressel won his fourth gold medal of the Tokyo Olympics with a victory in the 50-meter freestyle Saturday. Dressel cruised to a relatively easy win in the frenetic dash from one end of the pool to the other, touching in an Olympic record of 21.07 seconds.

BOSTON (AP) — Tenants saddled with months of back rent are facing the end of the federal eviction moratorium Saturday, a move that could lead to millions being forced from their homes just as the highly contagious delta variant of the coronavirus is rapidly spreading. The Biden administration announced Thursday...

CDC director defends mask guidance: 'This weighed heavily on me'

The head of the Centers for Disease Control and Prevention (CDC) said the decision to update federal guidance on mask wearing was not easy to make, but a move the agency deemed necessary in order to slow the spread of the coronavirus. “This was not news that I expected the...

July 30 (Reuters) - Walt Disney Co (DIS.N) said on Friday it was making vaccination mandatory for all its on-site salaried and non-union hourly employees in the United States, as the highly infectious Delta COVID-19 variant drives a resurgence in cases. "Employees who aren't already vaccinated and are working on-site...