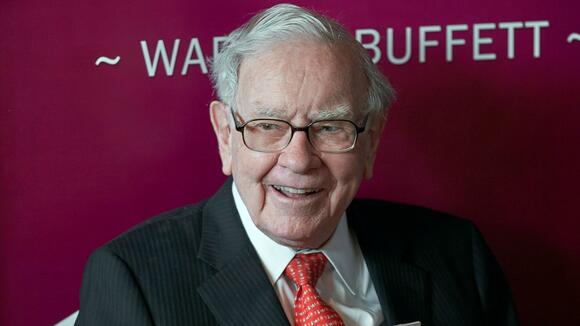 Warren Buffett announced Wednesday that he is donating another $4.1 billion to philanthropic organizations and is stepping down as trustee at the Bill and Melinda Gates Foundation.

Buffett's latest distribution of wealth is part of a pledge he made in 2006 to give away all of the shares he owns in Berkshire Hathaway, the Nebraska-based conglomerate he has helmed since 1970. His Berkshire Hathaway shares comprise some 99% of his net worth and Buffet said he is "halfway there" in donating the majority of his wealth.

The recipients of Buffett's donations include the Bill and Melinda Gates Foundation, the Susan Thompson Buffett Foundation that was named in honor of his late wife and philanthropic organizations founded by his children.

MORE: How our tax codes let the rich get richer: 'We need better tax laws'

In a lengthy, self-reflective statement, Buffett said it was the "easiest deed in the world" to "give away money that will never be of any real use to you or your family."

"A much more admirable form of philanthropy than mine involves the giving of personal time and effort," he added. "I’ve done little of that."

"Those who give their love and time in order to directly help others -- perhaps adding a monetary gift that requires them to give up the purchase of something meaningful for their own use -- are the heroes of philanthropy," Buffett stated. "America has millions of such givers."

The billionaire said he has been an "inactive trustee" for years and has resigned from other corporate boards.

"My goals are 100% in sync with those of the foundation, and my physical participation is in no way needed to achieve these goals," Buffett said.

Buffett was one of only three trustees at the foundation -- the other two being Bill and Melinda Gates, who are in the process of divorcing.

In a letter sent to employees of the Gates Foundation, CEO Mark Suzman noted that Buffett is stepping down from his role as trustee but is "continuing his incredible financial support," noting that Wednesday’s gift was the largest to date and he has given nearly $33 billion to the foundation.

Suzman promised "additional information" will be coming in July.

MORE: Bill and Melinda Gates to divorce after 27 years of marriage

Bill Gates, meanwhile, said in a statement that the foundation "will always have a deep sense of accountability to Warren, paying close attention to the data to track our progress and identify where we can do better."

"But the value of Warren’s gift goes beyond anything that can be measured," Bill Gates added. "I am truly grateful for his wisdom and leadership, and most of all for his enduring friendship. Warren will continue to inspire our foundation as we work to fight poverty and help millions of people live healthier lives."

Melinda Gates added in a separate statement that she is "grateful for Warren’s generosity, his leadership, and his friendship."

"His wisdom has been a guiding light through our foundation’s second decade, and the things we’ve learned from him will continue to help us chart a way forward," she added.

After nearly three decades of marriage, Bill and Melinda Gates announced last month that they were divorcing, but said they will keep working together at their foundation.

Those hoping to get a selfie with Melinda Gates while she’s in town will be bitterly disappointed. Spies spotted the soon-to-be-former Mrs. Bill Gates at private club Zero Bond Thursday surrounded by a total of six bodyguards and three SUVs. A veteran of the celebrity scene said they’d never seen...

When Bill Gates and Melinda French Gates announced their divorce, numerous reports of the billionaire womanizing and sexually harassing his colleagues at Microsoft surfaced. On Aug. 2, nearly three months after the shocking announcement, the two co-founders of The Gates Foundation finalized their divorce. The former couple was married for...

Having rich and famous parents comes with its perks -- which can include a sizable inheritance. But some business people and celebrities aren't looking to pass on their riches to their kids. Instead,...

Bill Gates Net Worth Plunges To LOWEST Ever Because of Divorce From Melinda?

Bill Gates' net worth is on verge of pulling down the technology mogul from the list of richest people in the world. Only months after announcing their split, Bill and Melinda officially put an end to their saga by finalizing their divorce this week. Fox Business obtained the official document...

Suze Orman, Warren Buffett and Other Money Experts Weigh In on How To Best Set Yourself Up for Retirement

There's certainly no shortage of advice about how to invest for a successful retirement. However, sometimes it can be hard to know who to believe. If you don't have a trusted fiduciary financial...

For decades, Bill Gates has put the “bill” in “billionaire.” As the founder of Microsoft, the 65-year-old tech titan reigned as the richest person on the planet from 1995 to 2010, then again from 2013 to 2017—the year Amazon founder Jeff Bezos finally stole his crown. Nowadays, Gates and Bezos are the top contenders for another ultra-expensive title: World’s Costliest Divorce.

Since the news of their split, many wondered what Bill Gates’ divorce settlement with Melinda Gates would look like Bill, the co-founder of Microsoft, is worth $130 billion. So how much did will Melinda get in her divorce settlement? Well, it looks like that number is nothing. A judge finalized Bill and Melinda’s divorce on Tuesday, August 2. In the agreement, which was filed in the Superior Court of Washington and obtained by E! News, the court noted that there was “no money judgement” ordered and that neither Bill nor Melinda asked to change their names. No spousal support was also...

Is Bill Gates vaccinated against Covid?

TECH mogul Bill Gates was outspoken about the coronavirus vaccines during their development. In fact, Gates said that Covid-19 medication and future vaccines should be distributed to people who need them the most and not to “the highest bidder.”. Is Bill Gates vaccinated against Covid?. During the development of the...

Buffett's company has owned a chunk of American Express for close to three decades. The stock is up about 45% this year.

Bill Gates and Melinda French Gates, co-founders of one of the world's largest private charity foundations, finalized divorced on Monday. After 27 years of marriage, the pair filed for divorce on May 3 but promised to continue their charity work together. At the time, Gates stated that they had agreed...

Bill Gates Net Worth 2021: How Rich Is the Microsoft Founder After Divorce With Melinda Gates?

Getting divorced often impacts the couple's personal and financial lives. Despite this development, the latest numbers tease that Bill Gates would remain the fourth richest man in the world!. Here are some of the estimated divisions of assets that would alter Bill Gate's net worth this 2021. After 27 seven...

The ex and soon-to-be ex of two of the richest men in the world are teaming up to give away $40 million to four organizations that promote gender equality. Melinda French Gates, the estranged wife of Microsoft founder Bill Gates, and Amazon founder Jeff Bezos’ ex-wife MacKenzie Scott announced the donation together.

SEATTLE — Bill and Melinda Gates have officially divorced according to court papers filed in King County Superior Court in Washington state on Monday. In addition to the dissolution decree, a separation contract was included in the filing. The terms of the contract are confidential. Documents did reveal that neither will change their names or receive “spousal support,” according to Bloomberg.

Billionaire philanthropist Bill Gates and estranged wife Melinda finalized their divorce Monday — months after they first announced their split, a report said. A judge formally signed off on the pair’s divorce, TMZ reported, citing court documents. The gossip outlet did not specify the name of the judge or where the documents were filed.

Bill Gates Is Officially Single, Nasty $130 Billion Divorce From Melinda Is A Done Deal Despite No Prenup

Bill Gates is a single man again -- because his $130 billion divorce from Melinda Gates is official. Just two months after filing to end their marriage after 27 years together, the bitter exes are finally and officially over. According to reports, a judge signed off on their divorce on...

When I was in high school, my chemistry teacher went through a messy divorce, after which she held onto her ex’s last name. I assume she probably figured it would be easier to just keep going by her married name than to try to get a bunch of air-headed teens to call her by a different one, but I remember thinking this was really sad. After all, who would want to lug around their ex’s last name, a constant reminder of your failed relationship? It is only now, thanks to a certain Melinda French Gates — formerly known as Melinda Gates — that I can recognize refusing to give up your ex-husband’s name for the flex that it is.

Warren Buffett is constantly listed as one of the world’s richest people, with an estimated net worth of more than $100 billion. But unlike his good pal Bill Gates, Buffett doesn’t live in a sprawling, $100 million lakeside home. No, the 90-year-old chairman and CEO of Berkshire Hathaway doesn’t exactly...

15 Genius Things I Learned at Lunch With Warren Buffett

In 2008, the managing partner and principal of Aquamarine Capital, Guy Spier, and his colleague Mohnish Pabrai got the rare opportunity to attend a charity lunch with famed investor Warren Buffett....

So Bernie Sanders and Elizabeth Warren and Alexandria Ocasio-Cortez express outrage that billionaires Richard Branson (British) and Jeff Bezos travel into space. As usual those three appeal to the most naïve, uninformed undergraduate mentalities. “They should be giving money to fix problems on Earth.” They are angry that these very accomplished wealthy men pay little personal income tax. But five minutes of homework reveals that Bezos, Bill and Melinda Gates, Mark Cuban, Mike Bloomberg etc., give billions of dollars to various worthwhile causes including to fight climate change and bring basic medical care to Africa and to the French “Doctors Without Borders.”