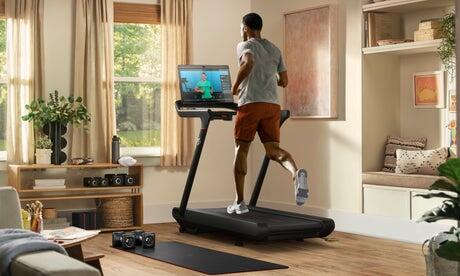 The new additional fee was rolled out last week. It had previously been free to access the monthly membership under the “Just Run” setting.

It meant that owners could use their running machinelike they would in a gym, without having to pay the additional fee for classes.

Many Peloton users were disgruntled by the removal of the feature, with Jennifer Strong, 39, telling Business Insider : “I am now no longer able to use the equipment without buying a membership, which is not right.”

Many people complained about the feature being removed on Twitter.

“So wait… You buy a [$4,000] treadmill, then after you’ve purchased, with a ‘software update’ they stop it from working until you pay them $39.99/mo? Sounds like Theft & Ransomware to me…” tweeted one person.

The “Just Run” service was discontinued in light of Peloton having to recall several of its machines over safety concerns in May, following the death of a child and numerous other reported injuries .

"In our ongoing work to ensure that our products are even safer, and as part of our voluntary recall in collaboration with CPSC, we released Tread Lock, a four digit passcode to secure Tread+ against unauthorized access,” a Peloton spokesperson said.

“Unfortunately due to current technical limitations, Tread Lock is not yet available without a Peloton Membership.”

They added that the company has waived fees for three months of All-Access Membership for all Tread+ owners, so those without a subscription will need to activate this membership to enable Tread Lock before they can access Just Run.

“We understand that this is an inconvenience for some and are working on updates to Tread Lock that will allow us to make Tread Lock and Just Run available without a Peloton Membership,” they continued.

“As a reminder, under the terms of our voluntary recall , Tread+ owners can return their Tread+ for a full refund by contacting Member support."

(Reuters) – Interactive fitness equipment maker Peloton Interactive Inc said on Tuesday it would provide UnitedHealth Group’s millions of fully insured members access to its live and on-demand fitness classes for a year at no additional cost. The members of the U.S. health insurer can enroll with Peloton starting Sept....

Facebook on Tuesday reaffirmed its intention to build an Instagram for kids under 13, despite pressure from lawmakers to back down on the plan, while simultaneously announcing new updates to address concerns about the safety of younger users on its platforms. In a blog post, the company said it is...

An ex-Facebook employee said the company demanded she remove a critical memo of it from her personal website. When she declined, her entire site was suddenly shut down.

Online list of vaxxed businesses forced to shut down over backlash

After just a few days, a growing online list of Ontario businesses that had vaccination policies and promoted the vaccination of their staff has shut down because some of those businesses faced reprisals. “Whenever I add a new business, there is a group of people (a small minority), who attack...

Peloton vs. NordicTrack: How Their Indoor Cycling Bikes and Treadmills Compare

Each product we feature has been independently selected and reviewed by our editorial team. If you make a purchase using the links included, we may earn commission. When you're looking to build out your home gym, trying to decide what equipment to buy let alone from what brands can feel impossible with a new gadget coming out seemingly daily. Still, there are a few brands on the tips of most peoples' tongues, and you are likely trying to decide between those few household names before making the hefty investment.

A woman sought help from the Reddit community after her new neighbor started sunbathing in the apartment building's communal garden. The post was met with diverse reactions. A woman sought the help of the Reddit community after she acted upon her neighbor's actions. The woman, who lives in an apartment building, disapproved of her fellow resident sunbathing in the garden for everyone to see.

A baffled dad exposed a racist who refused to sell him a car because he is black- forcing her to quickly back-track and blame her ex-boyfriend when hundreds on the internet stood up for him. Michael Josephs was eager to snap up a 'bargain' BMW 3 Series from Facebook Marketplace...

A woman was left feeling “very upset” after airline staff told her to cover up before a flight because she was “showing too much skin”. Courtney Newbold was about to board an Air New Zealand Rarotonga-Auckland service on 23 July when she claims two separate flight attendants remarked on her outfit.

NEW YORK — A family is sharing a stark new warning for others about the alleged dangers of the Peloton Tread+ treadmill after they say their son was sucked under the belt and severely injured. Ygal and Sarah Saadoun spoke exclusively to ABC News about their 4-year-old son, who they...

Erica Wiltz, a model, opened up about her terrible experience at the Saks Fifth Avenue in Manhattan. Wiltz, who hails from New York City, documented the casual racism in a TikTok video that showed her waiting at the store and an employee walking away from her. Wiltz waited patiently as the employees of the luxury store catered to a white woman, the only other customer at the store. Wiltz saw that the staff were really nice to the white woman as she excitedly tried on a different set of shoes. She was happy to see her being treated that way and waited for her turn. They barely even acknowledged Wiltz's presence as she waited patiently.

I gave my parents a vintage car. They secretly agreed with my brother to take any upgrade costs out of my inheritance. Is that fair?

‘I did make it a conditional gift, in the sense I requested it be willed to me upon their passing.’

CNN's Cuomo tells restaurant owner: 'You sound like an idiot' for denying service to vaccinated customers

CNN host Chris Cuomo conducted a testy interview with a California restaurant owner who is requesting customers prove they are not vaccinated, an exchange that ended with the host telling the business man he sounds "like an idiot." "This is not an anti-vaccine stand, it's a pro-freedom stand," Tony Roman,...

Peloton says it's preparing to enter the video game business

A new photo surfaced on Facebook of Amy Halterman that has 1000-Lb. Sisters fans concerned about her weight gain. The fresh snap of the TLC personality surfaced in a Facebook group after a fan bragged about running into Amy during a trip to Walmart. The comments in response to this new photo, however, were deeply concerned. Has she gained weight since giving birth to her son Gage? Those reacting to the photo all seemed to agree Amy looked a little on the heavier side.

Ministers have been accused of “flying by the seat of their pants” over Covid controls, as business leaders warned that plans to exempt key staff from self-isolation were “unworkable”.In a day of chaos, Downing Street was twice forced to intervene after a minister suggested both that businesses could tell staff to ignore “pings” asking them to quarantine for 10 days as Covid contacts, and that pubs had been ruled out of the plan for “Covid passports”.Industry organisations warned that absences due to self-isolation were growing “exponentially” in areas such as food supply and manufacturing, with firms across the country...

Finding parking can be tricky, but there's nothing more frustrating than getting home from work only to discover someone else in your spot. This is what happened to an Oregon man, Tyjai Huddleston, who returned after an eight-hour shift and had nowhere to put his car. Huddleston, 20, shared a...