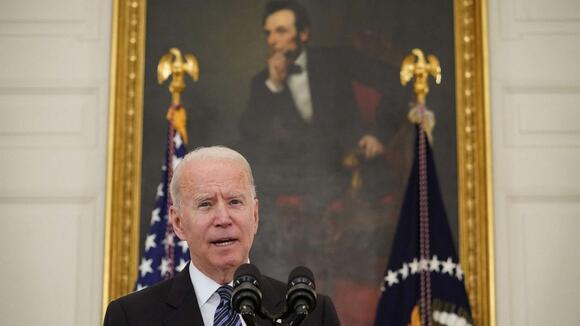 President Joe Biden on Wednesday announced a range of actions targeting rising gun violence , according to the White House, as homicide rates jump heading into the summer months -- and Republicans blame him for it.

He began his remarks by saying the rise in violent crime dates back to last year, before he took office.

"It has spiked since the start of the pandemic over a year ago. Crime historically rises during the summer. And as we emerge from this pandemic with the country opening back up again, the traditional summer spike may even be more pronounced than it usually would be," he said.

He laid out a "comprehensive strategy" that will target law-breaking gun dealers, provide federal resources to police departments for gun-crime enforcement and allow communities to repurpose millions of dollars of federal coronavirus relief funding for programs proven to prevent gun violence.

In doing so, Biden is seeking to establish his footing amid GOP attacks over increased violent crime in American cities, many of which are run by Democrats.

Gun violence has driven much of that increase recently and Biden framed the issue through that prism -- unlike Republicans, who blame high homicide rates on Democrats who called for police funding to be cut last year.

In reality, demands to "defund the police" amid last year's racial justice protests amounted to modest funding reductions in some cities, while homicides have risen across the country , according to the Associated Press .

"This shouldn't be a red or blue issue," Biden said. "It's an American issue."

Before Biden pushed back against relentless Republican attacks that he's to blame, White House press secretary Jen Psaki noted Tuesday that violent crime has gone up not just "over the last 18 months" but "over the last five years or so."

The president intends to "give state and local officials a number of tools" to help them reduce gun crime, a senior Biden administration official said Tuesday.

The administration will allow communities to spend some of the funding they received as part of this spring's $1.9 trillion COVID-19 relief bill funding to combat gun crime, such as investing in summer jobs programs for youths; hiring more police officers and court personnel; spending on gun-violence enforcement; and paying for more nurses, counselors and social workers.

The money could come from the $350 billion in state and local funding included in the relief bill signed into law in March, and in some cases from the $122 billion the bill set aside for schools, according to senior Biden administration officials.

Other measures include establishing a "zero-tolerance" policy for gun dealers who break the law; embedding federal law enforcement officials with local police departments; and hiring more formerly incarcerated people for jobs in the federal government, according to the White House.

Biden and Attorney General Merrick Garland met with several mayors, advocates and a police chief on Wednesday before making their remarks.

But the White House has struggled to explain what prompted the president to focus on crime this week in particular -- with Psaki presenting his remarks, instead, as a continuation of his previous support for gun control measures and community policing.

Even as the White House touts the limited steps Biden has taken to regulate hard-to-track "ghost guns" and accessories that make pistols more like rifles, gun-control advocates maintain that real action needs to take place in Congress.

MORE: How 5 police departments are tackling violent crime surge in US

On Capitol Hill, the Democratic-led House of Representatives passed two bills that would expand and strengthen the use of background checks for firearms purchases. But the measures have stalled amid Republican opposition in the Senate.

The president, meanwhile, has used his bully pulpit to advocate for legislative progress on guns, but he has prioritized other issues: the coronavirus pandemic, rebuilding the economy and passing a major infrastructure package.

On the campaign trail, Biden made bigger promises on guns on which he has yet to follow through, including banning the importation of assault weapons.

Guns are at the center of rising homicide rates nationwide. The number of killings has jumped even as other types of crime are becoming less common.

Homicides spiked by 30% in 2020 compared to the year before, according to a study released earlier this year by the National Commission on COVID-19 and Criminal Justice .

While other violent crimes, like aggravated assaults and gun assaults, saw modest increases in 2020 compared to 2019, the number of non-violent crimes like residential burglaries dropped, the study found.

Last year also presented a unique variety of circumstances that could have impacted the shifting rates, such as police officers pulling back over fears of contracting COVID-19 or criminals taking advantage of protests over police killings.

After he concluded his formal remarks Wednesday, a reporter asked, "Mister President, are you still holding out hope that Congress can pass another weapons ban?

"I never give up hope," he answered.

White House press secretary Jen Psaki told reporters Wednesday she is "disappointed" that Republican senators are "moving in lockstep" to block the confirmation of former Bureau of Alcohol, Tobacco, Firearms, and Explosive agent David Chipman, President Joe Biden's nominee to serve as the ATF's next director.

White House press secretary Jen Psaki dodged a question about President Biden’s gun violence prevention strategy Monday, saying the rising crime rates in big cities across the country shouldn’t be expected to "turn on a dime." During her daily press briefing, Psaki was asked by Fox News’ Peter Doocy whether...

The Biden administration is pushing to curb gun violence in American cities. Last week, the Justice Department announced the creation of strike forces in five major cities aimed at stopping illegal guns before they hit the streets. Devlin Barrett, a national security reporter for the Washington Post, joined Elaine Quijano on CBSN to discuss the Justice Department's efforts to target small-level straw buyers of guns later used in crimes.

President Joe Biden's approval rating for his handling of gun violence has fallen to 37 percent, according to a new poll, as shootings continue to rise in five major U.S. cities. The latest ABC News/Ipsos poll, conducted between July 23-24 and released Sunday, showed Biden's gun violence approval rating under...

As Biden's America becomes less safe, the violence and crime could cost Democrats

Under the Biden administration, violent crime continues to rise across the country, particularly in cities controlled by Democrats, such as Baltimore and Chicago. Regardless of this alarming trend, neither President Biden nor the leaders of his Democratic Party have taken significant steps to combat increasing crime, or even shown serious concern about the uptick.

Justice Department officials eager to stanch the rising tide of gun violence in America launched an effort Thursday to choke off the flow of weapons to five major cities, targeting small-level “straw” buyers of firearms later used in crimes. At a meeting with leaders at the Bureau of Alcohol, Tobacco,...

President Biden, in marking two years since the El Paso shooting which took the lives of 23 individuals, called Tuesday for Americans to "stand united against hate and violence," outlining his administration’s efforts to combat domestic terrorism and end "the plague of gun violence" in the country. In an op-ed...

President Joe Biden is dropping into the country's intelligence hub this week, but the excursion has not been scheduled to take a direct dig at former President Donald Trump, according to the White House.

The surprising holdout from Maine has come under pressure to buck David Chipman, who is seen as resistant to gun rights.

Flashback: Biden predicted Cuomo would be criminally prosecuted over allegations

Help or 'get out of the way,' Biden says to GOP governors on combatting pandemic

The president took aim at local officials, including the Florida and Texas governors, over laws that prevent public health measures in the wake of surging COVID-19 cases.

And the Biden administration reversed itself on extending a ban on evictions.

Biden Calls Out Governors Obstructing Vaccines, Masks: ‘Get Out Of The Way’

Lamenting that this fourth covid wave was a "largely preventable tragedy" and a "pandemic of the unvaccinated," President Joe Biden spoke out in favor of tougher vaccine requirements and told state and local officials to stop hindering efforts to get shots in more arms. President Biden on Tuesday denounced Republican...

Florida Gov. DeSantis attacks Biden: ‘I don’t want to hear a blip about COVID from you’

FORT LAUDEREDALE, Fla. — Gov. Ron DeSantis, facing the Florida surge in COVID-19 cases and hospitalizations, delivered extraordinary and impassioned remarks on the issue Wednesday — attacking President Joe Biden. “This is a guy who ran for president saying he was going to quote ‘shut down the virus.’ And what...

Capitol cops BACK DOWN after Republican backlash over order to arrest staff and visitors who break Pelosi's mask mandate: Fury at CDC for reinstating masks but NOT releasing data behind decision

U.S. Capitol Police backed down on Thursday and said they would ask people in the House of Representatives not wearing a face mask to leave after Republican lawmakers blasted a memo that stated such individuals would be arrested. The agency did not specifically rule out arrests, but did say it...

My family and I all have Covid. We’re fully vaccinated. It’s clear we need another lockdown

I remember the day I received my first shot of the Pfizer Covid-19 vaccination. It was April 1, and I went with my mother, who was also receiving her first dose. At the time, we had to drive forty-five minutes one way to reach the closest vaccination site at an old regional airport in Jasper, Alabama.Queued up in my car to get the shot, I was panicking because I was certain that I was going to be denied: I didn’t have health insurance and I still had an out-of-state driver’s license. But none of that seemed to matter that cool...

The Capitol police officer who testified he was called a 'n-----' during the Jan. 6 riot says he's since been targeted with racist abuse online

US Capitol Police Officer Harry A. Dunn says he's faced racist abuse through Facebook, Twitter, and email since testifying on the Capitol riot.

(CNN) — Joe Biden's presidential honeymoon has officially ended, with a series of problems -- led by the ongoing surge of the Delta variant of the coronavirus -- coalescing to make the last few days some of the worst ones he has spent as president. Consider the current landscape Biden...