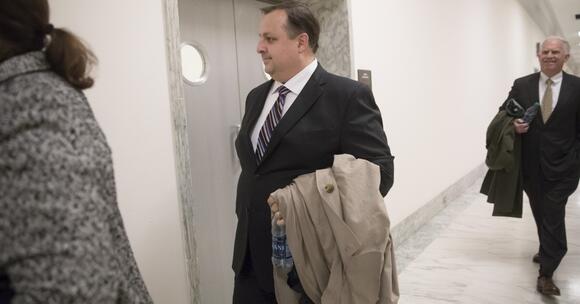 Shaub, who served in the Obama administration as the director of the Office of Government Ethics, is upset for a couple of reasons.

First, he is angry President Joe Biden’s pledge that "no one in our family and extended family is going to be involved in any government undertaking" doesn't apply to all White House officials.

“At least five children of his top aides have secured coveted jobs in the new administration,” the Washington Post reported this week.

Shaub is also angry Hunter Biden is auctioning his amateur artwork to undisclosed buyers for as much as $500,000 a pop. This art payday comes on top of the fact the president's son also scored a lucrative gig at a Ukrainian energy company, despite having no background in energy and not even speaking Ukrainian.

For Shaub, the art gig is just too much.

“It makes perfect sense that a hedge fund manager with no art training who has never sold a piece would seek $500,000 for his doodles,” he groused on social media, “and anyone who thinks the payoff's based on his relation to POTUS is patently crazy.”

Elsewhere, during an appearance on Fox News, Shaub argued, “The notion of a president’s son capitalizing on that relationship by selling art at obviously inflated prices and keeping the public in the dark about who’s funneling money to him has a shameful and grifty feel to it.”

He continued, explaining that keeping the sellers anonymous allows “influence-seekers” to purchase access to the president.

It’s only prudent, he added, that the identities of the buyers be disclosed so the public can know whether anyone is attempting to buy access to the White House.

The “public should not have to take it on blind faith that government officials will behave,” Shaub said, regardless of whether “any attempt to curry favor or buy influence is likely to succeed.”

“But, I also think it’s ridiculous that Hunter Biden is even going forward with this sale as a first-time artist,” he continued. “He can’t possibly think anyone is paying him based on the quality of the art. This smells like an attempt to cash in on a family connection to the White House.”

“At a minimum, the president should be asking his son not to go through with this auction,” Shaub added.

The younger Biden, who is recovering from drug addiction, paints in his spare time as a form of therapy. Now, the young Biden’s therapy artwork is set to sell for anywhere between $75,000 to $500,000, thanks to a deal brokered by art dealer Georges Berges, who keeps all sales confidential.

Berges’s representing agency, The Townsend Group, argues it’s perfectly normal for amateur artists to sell their artwork for as much as $500,000 to anonymous buyers.

“Pricing fine art in his experiences as a Gallerist is based on the demand of the work as well and the intrinsic value of it,” the group told Fox Business. “His feeling is that within each piece — as with every artist, sales are always confidential to protect the privacy of the collector. This is standard practice for transactions in galleries as well as auction houses.”

Shaub is also disturbed by the fact the Biden administration has hired family members of White House officials. He has reason to be distraught. Indeed, with the hiring of so many administration family members, it appears the president's anti-nepotism pledge was clearly just anti-Donald Trump lip service.

“[T]his royally sucks,” Shaub said on social media. “I’m disgusted. A lot of us worked hard to tee him up to restore ethics to government and believed the promises. This is a real ‘f*** you’ to us — and government ethics.”

He added, “The jobs went to privileged kiddos with mommies & daddies who cozied up to POTUS. Nepotism is illegal.”

That’s not all. Shaub was just getting started.

“EVEN THE F****** HEAD OF PRESIDENTIAL PERSONNEL,” he said on social media, “WHO IS SUPPOSED TO BE KEEPING THEM HONEST, HAS A CHILD WHO'S A RECENT COLLEGE GRAD WORKING IN THE ADMINISTRATION. AND THE SPOUSE OF THE WHITE HOUSE CHIEF OF STAFF, FOR CRYING OUT LOUD. This is ridiculous. What a f****** failure.”

He added, “When little problems like this, which are so damn easy to avoid, crop up, it's a sign of much bigger rot. Because if you can't even do the easy things, you sure as hell can't do the hard things.”

“I'm the stupid moron who fell for his false promises,” he said. “I wasn't naive enough to think he'd be a transformative president. He told us he'd be plain vanilla. But, I thought there was momentum behind his ethics promises. Boy, was I stupid.”

He added, “So, yeah. I'm disappointed. I'm angry. I supported this guy. I provided help to the campaign and the transition because I believed ethics was going to be a priority.”

Who knew good ol’ Joe Biden, who represented the credit card state in the U.S. Senate for 36 years, has such a transactional view of politics? It's a surprise to all of us.

If an Obama Whitehouse staff thinks that Biden is too sleezy then it must be terrible! Obama was sleezy in his own right.

It's funny because the ONE PERSON that predicted Bidens behavior was Donald Trump. He tried to warn everyone of just about everything that's gone wrong since Biden became president

I think Mr. Shaun is the only one who is surprised and angry at Biden’s lack of ethics. That’s how he “won” the election. He has no ethics.

WATCH: Biden appears to ask if dead congresswoman is at White House speech

President Joe Biden appeared to ask Wednesday morning if the late Rep. Jackie Walorski (R-IN) was in attendance for a speech he delivered in Washington, D.C.
WASHINGTON, DC・2 DAYS AGO
WashingtonExaminer

WATCH: Sen. Ted Cruz has livid laundry list of why he thinks Biden is racist

Sen. Ted Cruz (R-TX) blasted President Joe Biden and Democrats for being racist and not caring about the southern border.
CONGRESS & COURTS・2 DAYS AGO
WashingtonExaminer

President Joe Biden’s Wednesday slip asking for a deceased lawmaker during a White House event left reporters at the afternoon press briefing with a question of their own: How could the president, who turns 80 shortly after the midterm elections, have been confused about her whereabouts?
PRESIDENTIAL ELECTION・1 DAY AGO
WashingtonExaminer

The White House pushed back on suggestions that it was slow-walking a decision to lift a union-backed century-old shipping rule to speed fuel transport to Puerto Rico in the hours before "a temporary and targeted" waiver was ultimately granted.
POTUS・1 DAY AGO

Former President Donald Trump has denied claims that he wanted to fire his daughter and her husband from the White House, calling it "pure fiction."
POTUS・10 HOURS AGO
HuffPost

Florida Gov. Ron DeSantis, who recently made headlines for flying 48 migrants to Martha's Vineyard, was praised by Republicans for standing up against the Biden administration's immigration policies, but his political stunt has angered one of his closest allies – former President Donald Trump. Trump has privately accused DeSantis...
FLORIDA STATE・3 DAYS AGO
WashingtonExaminer

Dose of reality: Did Biden tell people in path of Hurricane Ian to get COVID-19 vaccination?

A clip of President Joe Biden urging people in Hurricane susceptible regions to get vaccinated against COVID-19 resurfaced Tuesday, prompting questions about the authenticity of the video.
FLORIDA STATE・2 DAYS AGO

As Hurricane Ian continues its path of destruction, one of the hardest-hit areas was Sanibel Island in Lee County, Florida.
LEE COUNTY, FL・1 DAY AGO
The Hill

Sunny Hostin, a co-host of ABC’s “The View,” says she was dismayed by the reaction from the media and public following a verbal gaffe by President Biden this week when he asked if a congresswoman who died earlier this year was in attendance at the event where he was speaking.
U.S. POLITICS・1 DAY AGO
Newsweek

A Russian soldier has surrendered to Ukrainian forces, just days after being deployed to fight under President Vladimir Putin's nationwide partial mobilization, according to an official. Anton Gerashchenko, adviser to Ukraine's minister of internal affairs, posted a video on his Telegram channel on Tuesday purportedly showing a Russian soldier who...
MILITARY・2 DAYS AGO
WashingtonExaminer

Hurricane Ian has left a path of destruction in its wake in southwest Florida, and the wounds from the storm are still being discovered.
FLORIDA STATE・1 DAY AGO

'I feel sorry for him': Brother of Jackie Walorski responds to Biden gaffe

The brother of the late Rep. Jackie Walorski (R-IN) downplayed an apparent gaffe by President Joe Biden in which the president asked for the late congresswoman, explaining that he is not angry.
U.S. POLITICS・1 DAY AGO
WashingtonExaminer

As Hurricane Ian rages on in Florida, its wildlife is being transported with it.
FLORIDA STATE・7 HOURS AGO
WashingtonExaminer

Stimulus update: Direct one-time payments worth $1,050 will start going out next month in California

Eligible California residents are set to get state-issued direct payments of up to $1,050 as part of efforts to combat continued inflation and the rising costs of nearly all products.
CALIFORNIA STATE・9 HOURS AGO

The Democratic nominee for Georgia schools superintendent complained on social media that she is being boxed out by her party and denied endorsements from heavy hitters aligned with Stacey Abrams.
GEORGIA STATE・2 DAYS AGO
WashingtonExaminer

Social Security update: Second half of direct monthly checks worth $1,682 to be sent in two days

Recipients of Supplemental Security Income will receive the final half of their September payments in just two days, marking the second payment of the month thanks to a scheduling quirk in the agency’s program. Eligible recipients can expect to receive their payments of $841 on Friday after receiving another...
PERSONAL FINANCE・2 DAYS AGO
WashingtonExaminer

Heiress billionaire and mother of two Eliza Fletcher, who was kidnapped during an early morning run, died from a gunshot wound to the head, according to the recently released autopsy report.
MEMPHIS, TN・11 HOURS AGO
WashingtonExaminer

Social Security payment: Monthly benefit check worth up to $1,657 to be sent out today for millions