TikToker and small business owner Austin Scott recently made a $126 sticker sale, apparently much to the dismay of the young purchasers’ mother.

In a video posted Saturday, Scott said he got dragged in a Google review from the confused woman after her daughters used her card to purchase 40 stickers, which she mistakenly thought would cost around $10.

According to Scott, stickers at his store, The Neighborhood Trading Company in Galena, Illinois, run $4 each but he gave the young girls a big discount because of their generous purchase. The reviewer, under the name Kitten Gordon, said in the comment that she saw a sign listing the stickers as 20 for $5. 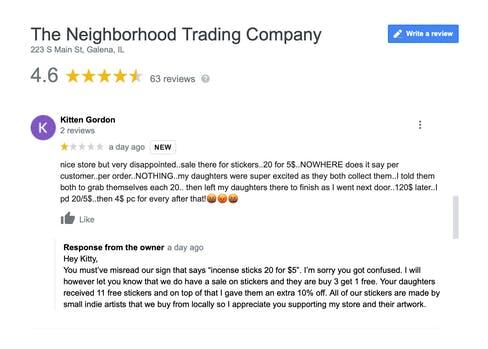 Scott then responded to the Google review and tried to explain to the disgruntled patron that there was, in fact, no sale of this kind, but that he had given her daughters a discount. He also thanked her for supporting his shop.

While Gordon did not respond to Scott’s comment on Google reviews, Scott says she did comment on her Square receipt, writing:

“I didn’t!” interjects Scott. “I told you the sale I gave them.”

“You took advantage of an easy situation with two young girls. The word will spread.”

Scott goes on to explain that commenting on the digital Square receipt allowed the customer to see the itemized receipt and the discount he gave them.

“She didn’t even try to reach out to me personally,” Scott says at the end of the TikTok.

“She probably ASSUMED that the stickers are cheap how expensive could they be? And instead of taking responsibility she’s gonna blame you,” commented @shad0w_muffin.

While most reviews are positive, Gordon is not the only patron that has left a 1-star review. A user under the name Kaitlyn Peppmeyer left this review a month ago:

The Daily Dot could not find contact information for the reviewer.

Update 6:26pm CT June 22: In a statement to the Daily Dot, Scott—who often posts retail stories from his store on TikTok—said that he received a surprising amount of support after this incident. He said that reactions to his videos are typically mixed.

“There is a belief that you’re just supposed to “smile and nod” in retail because it’s ‘the job’ but part of the reason I believe my videos do so well is I break that barrier and let the customers have it,” Scott told the Daily Dot. “The response from this video [is] shocking because it’s almost fully backing myself and my business.”

In regards to the customer’s complaint, he said that the woman has not reached out to him with proof of the sticker “sale.”

Scott further stated that stories like this and others on his page help show consumers what retail workers go through.

“These situations are not new to me or to retail workers,” he said. “Every day these kind of situations happen and truthfully it has to stop. People need to learn the respect is not just given and messes just don’t clean up themselves. Which is why no matter what side people fall on after watching my videos at least at the end of the day I’ll know I defended myself and my business.”

‘Of course people are going to break down under these conditions’: Viral photo of McDonald’s worker’s ‘quitting’ sign sparks debate

Sign up to receive the Daily Dot’s Internet Insider newsletter for urgent news from the frontline of online.

A dog trainer on TikTok says a “Karen” client of hers called the police after she didn’t answer the client’s text messages fast enough. Lindsay Johnson-Arro, known as @packleaderlinds on TikTok, posted footage of her conversation with the client, saying that the Karen called her “untrustworthy” for not answering her messages within 12 minutes.

While I don’t typically post reviews, I am more apt to most them after a negative experience. In fact, I recently did after an awful experience at a nail salon. However, I may think twice about that next time. A couple is being sued for defamation – for posting 1-star reviews online. Autumn Knepper and Adam Marsh of Vancouver, Washington say they posted negative reviews of a local roofing company after they claim the receptionist was rude to them over the phone. Knepper says shortly after the reviews went up, the company’s owner threatened to sue and told them to take down the reviews before “more damages are done”. Now they are being sued for $112,000, according to Newsweek.

Here are five things in technology that happened this past week and how they affect your business. Did you miss them?. 1 —Google Meet put the clamps on free users by imposing a 1-hour meeting limit. Google will now be limiting group video calls for its free users to one...

‘Someone save me from this nightmare’: TikToker reveals 5-star Airbnb listing is actually ‘hoarder’s house’

Airbnb has “betrayed” one TikToker’s trust after the listing she booked turned out to be a “hoarder’s house.”. The TikToker, who goes by Phoenicopterus Ruber or @phoenruber on the platform, shared pictures of a bed and breakfast that was supposedly listed on the Airbnb website and then compared them to what she actually found. The TikTok has received over 134,000 views.

A woman was captured on video flying off the handle in a nail salon after demanding the salon fix her nails for the fourth time in a week. A nearby TikToker managed to capture the encounter as she was attempting to “relax” and enjoy a pedicure. The resulting video was posted to @blowfish76‘s page—where it remains their only video—with more than 2 million views and 161,400 likes.

Google Cloud is looking to even the playing field when it comes to online discovery for small businesses with the launch of a new SEO service. The company's cloud computing arm has launched a collection of product discovery services and tools for all retailers looking to boost their online presence.

A viral TikTok prompted a debate over “paying it forward” after the creator complained about paying $30 for the order behind her at a Starbucks drive-thru. “My order was $10, and because you had to go and order for the person behind you, my anxiety-ridden ass couldn’t be like, ‘Oh OK thanks bye.’ I had to pay for the person behind me. $30!” user @codykatrina says in the video.

A TikToker shared three videos featuring her encounter with a Karen at an Ulta store. The videos, posted by TikToker Jacquelyn Switzer early Friday, have been viewed over 2 million times and show the woman accosting Switzer and her mother. The Karen in question, however, made little to no sense as to why she was accosting the pair in the videos, leaving many to speculate the cause of her outburst in the comments sections.

Video: ‘Karen’ who tried to lure dog into street caught harassing yet another Asian dog owner

A TikTok video of a woman harassing an Asian woman for having her dog unleashed on the grass in The Battery, a park in New York, went viral. #nyc #newyorkcity #foryoupage #fyp #stopasianhate #karensgonewild #batteryparkcity #batteryparknyc. ♬ original sound – user3112353082227. The on-screen text of the TikTok reads, “Asian American...

A viral TikTok video shows a white woman spraying a water hose at her Black neighbor who was cleaning her grill outside. Originally filmed and posted by @denisia_isme, the daughter of the Black woman shown, the footage from Georgia shows a white woman standing behind a Trump paraphernalia-covered fence, spraying her hose at the mother. The viral video has since been deleted from the TikTok page but was captured and reposted by @Tim_Tweeted to Twitter.

A TikTok user's video of an Airbnb showed how the photos in the listing didn't match the cluttered space she found in the Pennsylvania home.

There’s nothing quite so sweet as clapping back at someone in a language they assumed you didn’t speak. This gratifying experience was captured on camera by two streamers living in Vietnam, who thankfully shared their glorious moment with the rest of the world. Posted to Reddit’s r/PublicFreakout, the clip—which has...

Starbucks employees have been some of the most outspoken workers on TikTok. Krista Webster, a former Starbucks employee, proved this to be true by uploading a video of a conversation she had with a “toxic” manager. @krista.webster. #starbucks #managersbelike #barista #quityourjob #toxic #fyp #foryoupage #retaliation. ♬ original sound – Krista.

A manger for a combination Kentucky Fried Chicken and Taco Bell was shamed for the way she allegedly speaks to employees in a viral video posted to TikTok. The video garnered over 500,000 views since it was posted June 20 by @goodestbouollie. “Walked in to order and watched this manager...

Over the years, Amazon has been hit with numerous accusations about hazardous and inhumane working conditions. One of the most infamous is that time constraints are so rigid that employees urinate in bottles during work to avoid taking bathroom breaks, which Amazon has denied. Hazardous conditions, a toxic environment, and...

A TikTok video of a Domino’s Pizza delivery worker throwing a customer’s order to the ground in frustration after waiting at the door sparked a debate on whether his actions were justified. @lahyphy. Here’s the full video y’all requested. He was standing there approximately 1 min. but regardless he could’ve...

Amazon has denied claims made by a popular social media influencer that one of her recent orders contained used menstrual pads. In footage posted to TikTok on Thursday, Ava Louise, who went viral last year after licking an airplane toilet seat, alleged that a package she received after ordering jewelry contained blood and several sanitary napkins.