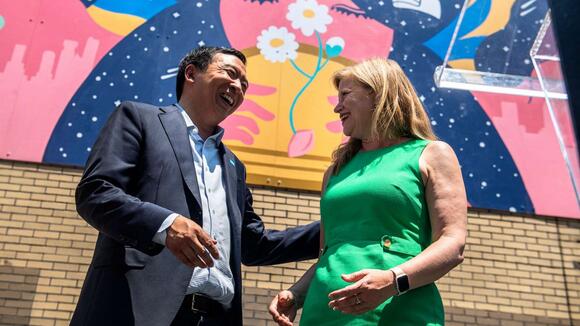 New Yorkers are gearing up to make a choice in the mayoral primary -- the first step in determining who will lead the nation's largest city at a critical juncture -- amid rising crime rates, an ongoing pandemic and economic recovery.

Several factors make this primary unprecedented for the Big Apple, however. New Yorkers are heading to the polls earlier than usual and using ranked-choice voting for the first time, all the while much of the primary race has been clouded by the COVID-19 pandemic.

The primary election is also taking place in June for the first time. Previously, it was held in September.

With the coronavirus having relegated much of campaigning to Zoom during the spring, there has been a mad dash in recent weeks to turn out voters in the five boroughs as life returns a new normal.

What is ranked-choice voting?

This primary serves as a major test for ranked-choice voting in the city.

When casting ballots, New Yorkers will rank up to five candidates for the city's chief executive instead of checking only one box as in elections past. Unlike a traditional winner-take-all election, the victor is decided through a process of elimination based on those rankings.

Ranked-choice votes come into play if no candidate earns more than 50% of first-choice votes, which is probable for the crowded Democratic primary, where 13 candidates will appear on the ballot, compared to the two Republicans on the GOP ballot. Vote counts then take place in rounds. The last-place candidate is eliminated in each round, allowing supporters of losing candidates to shift their support to their other choices. The rounds continue until one candidate has more than 50% of the vote.

It's a change that could delay the final outcome for weeks , according to elections officials. The New York City Board of Elections expects to have a preliminary count of first-choice votes on Tuesday night and will then tabulate ranked choices starting the following week.

Who is on the ballots?

At the center of the debate over who should lead the nation's largest city, is the uptick in crime and policing. Progressive candidates, including Maya Wiley, former counsel to Mayor Bill de Blasio, New York City Comptroller Scott Stringer and former Housing and Urban Development Secretary Shaun Donovan have called for reallocating funds away from the NYPD. Relatively moderate candidates, such as Brooklyn Borough President and former police officer Eric Adams and Andrew Yang, have stated their opposition to the notion of defunding the police and have instead called for more investment in law enforcement.

Affordable housing and economic recovery from the pandemic have also been among the top issues.

Adams is widely considered the front-runner in the race. His campaign is flush with cash, but he's faced accusations that he resides outside of New York City. Adams has denied those claims, giving reporters a guided tour of the Brooklyn home where he says he lives.

Momentum for Wiley has seemingly surged late in the race with endorsements from progressive heavyweights including Rep. Alexandra Ocasio-Cortez, D-N.Y., and Sen. Elizabeth Warren , D-Mass., though it is unclear what impact those endorsements will have on the outcome.

Former Sanitation Commissioner Kathryn Garcia, too, gained momentum later in the race, buoyed by endorsements from The New York Times and the New York Daily News. Yang, a former presidential candidate, benefitted early on from high name recognition, but support for the businessman has waned. The pair campaigned together over the weekend.

New York City Comptroller Scott Stringer, who was initially considered the progressive candidate to beat, saw his campaign derailed by sexual misconduct allegations. Stringer has vehemently denied those accusations. Despite calls from his opponents to drop out of the race and the loss of major congressional and progressive group endorsements, he has held on.

Dianne Morales, a former non-profit executive, is the furthest left candidate in the Democratic primary. Her campaign faced allegations of union busting and being unable to uphold the progressive ideals she espouses. Morales said she's worked to address the needs of her staff.

Ray McGuire, a former executive at Citigroup, has raked in donor cash but his campaign hasn't picked up steam. And Donavan has cast himself as a candidate with a progressive vision and government experience but has struggled to gain traction.

A Democrat will likely succeed de Blasio as the next mayor of New York City, but two Republican candidates are also vying to helm the city. Guardian Angels founder Curtis Sliwa and a restaurateur named Fernando Mateo have campaigned as tough-on-crime candidates pledging to put more officers on the streets.

The election of a D.C. inmate to local government is pushing the boundaries of voting rights and racial justice.

As Biden's infrastructure plan advances, can GOP get to yes?

For President Joe Biden and the senators laboring over a nearly $1 trillion infrastructure package, there’s just one question left: Can enough Republicans get to yes