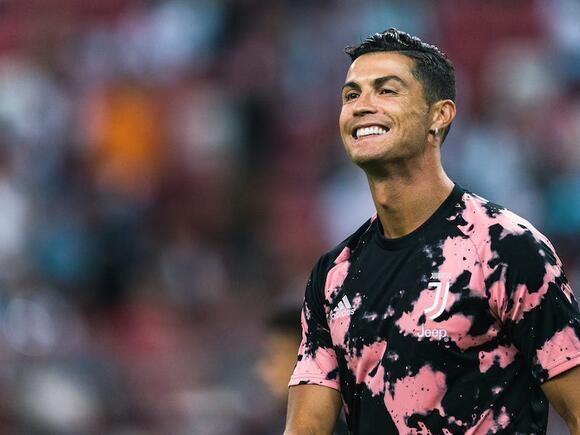 It's good to be Cristiano Ronaldo.

The money's afforded him houses around the globe, fancy cars, and, of course, private planes. And though he's in the process of selling his New York apartment in Trump Tower at a $10 million loss, he's still got plenty of dough.

Ronaldo owns two private planes: A Gulfstream G650 that runs around $65.5 million and can fly 8,000 miles without refueling, according to The Robb Report, and a Gulfstream G200 , which he purchased for $25 million.

While the jury's out on whether or not Ronaldo's recent diss of Coke really cost the company $4 billion , there's one thing that can't be disputed: This man really travels in style, and apparently with a fax machine.

A profile of the Gulfstream G200 by Simple Flying notes that the 10-seater plane includes an oven, microwave, and refrigerator, along with an entertainment system and a fax machine. Only 250 of the plane were ever made, so it's very exclusive.

Who could possibly be faxing Ronaldo? We may never know.

Cristiano Ronaldo's sister rushed to hospital due to COVID complications

Cristiano Ronaldo's influencer sister, Katia Aveiro, has been hospitalised with pneumonia as a result of COVID-19. The 43-year-old former singer posted on social media to reveal that after an initial mildly symptomatic episode with the virus, her condition has only deteriorated since. She is currently being treated in her native...

The image of Messi hugging the Copa America trophy has been liked more than 20 million times, beating a record set by Cristiano Ronaldo last November.

An Instagram photo of Lionel Messi holding the Copa America trophy following Argentina’s win over Brazil has become the most liked sports photo on the social media platform, surpassing a record 20 million likes. Messi celebrated winning his first major title with Argentina as the Albiceleste lifted the Copa America...

A SENSATIONAL swap deal between Juventus and Paris Saint-Germain involving Cristiano Ronaldo and Mauro Icardi is being considered, it's claimed. PSG have invested heavily in their squad this summer as they continue to chase the so far elusive Champions League crown. Italy’s Euro 2020 hero Gianluigi Donnarumma is the latest...

Diogo Dalot has declared Cristiano Ronaldo as the greatest of all time in a debate that seems to forever go on. The Portugal star and Lionel Messi have dominated world football for over a decade, picking up countless individual accolades. Both have achieved huge levels of success, albeit they go...

MASSIMILIANO ALLGERI is set to welcome new faces in Turin having returned to take charge of Juventus. The Italian gaffer stepped down at the Allianz Stadium in 2019, but he has been entrusted to get the Old Lady back to winning ways after replacing Andrea Pirlo. After nine consecutive Serie...

Wolverhampton is leaving no stone unturned even with a formidable roster made up of Joao Moutinho, Nelson Semedo and Pedro Neto. The trio is notable Portuguese footballers, and it appears there could be one more on the way. Reports have come out that the Wolves are adding Rafael Leao of...

LIONEL MESSI broke Cristiano Ronaldo's Instagram world record by racking up 20 MILLION likes on his Copa America trophy post. His rival Ronaldo previously held the record for the most-liked sports photo in the social media app's history. The Juventus forward, 36, has more than 19.8 million likes for his...

Barcelona have reportedly pinned news stories about Cristiano Ronaldo’s positive coronavirus test as a warning to their players to stay in line. The Juventus forward was the most high-profile player to pick up the virus after being infected whilst on international duty with Portugal last October. It caused Ronaldo to...

BARCELONA will host Juventus in a pre-season friendly in August, which could see Lionel Messi face off against Cristiano Ronaldo once again. The two European giants meet in the Joan Gamper trophy, a one-match tournament created in memory of Barcelona's founder. The Catalans have won it eight years in a...

Juventus are reportedly considering a shock deal where they will look to swap Cristiano Ronaldo for one of Paris Saint-Germain's star strikers. Ronaldo, who is the all-time international and Champions League record goalscorer, scored an impressive 29 goals in 33 league games for Juventus last season, as well as winning the Euro 2020 Golden Boot with five goals.

Cristiano Ronaldo has been linked with a sensational transfer to Premier League side Manchester City this summer. Juventus superstar Ronaldo's future is yet to be resolved and he has just a year left on his current contract. The club would accept his request to leave this summer if he wanted...

Manchester United is on the brink of missing out on one of its most notable prospects. Pedro Goncalves’ case of potentially becoming one of Manchester United’s signings this summer is nearing dead end as Sporting CP has decided to keep the prolific forward. The reigning Primeira Liga champions have set...

Lionel Messi and Cristiano Ronaldo's international careers have been compared online and it's gone viral. Messi won the first major trophy of his Argentina career last week after a 1-0 win over Brazil in the Copa America. It's been a long time coming for the 34-year-old and it means he's...

ANDRE SILVA was bizarrely asked what Cristiano Ronaldo SMELLS like during his unveiling at RB Leipzig. The 25-year-old officially sealed a £30million move to the Bundesliga giants this month following his exploits alongside CR7 at Euro 2020. DREAM TEAM IS BACK! SIGN UP NOW FOR THE 21/22 SEASON FOR YOUR...

The Story Behind Cristiano Ronaldo's Discovery in Madeira

Coca-Cola's Chief Financial Officer John Murphy has opened up on footballing superstar, Cristiano Ronaldo's snub of the product during a press conference at the 2020 European Championship, which created headlines. Ronaldo who is known for his intense dedication to fitness and diet snubbed Coca-Cola and held a bottle of water...

Cristiano Ronaldo is set to end speculation about his immediate future by sticking with Juventus, according to reports in Italy. The 36-year-old is coming into the final year of his deal with the Italian giants and will become a free agent at the end of the upcoming season. With the...

Cristiano Ronaldo is making headlines for teasing a big decision that could forever change the trajectory of his football future. Though the 36-year-old did receive the Golden Boot at Euro 2020, it was believed to be an underwhelming campaign for a Portugal side tipped to go all the...

Another top flight club may be working on signing a highly-regarded AC Milan striker. The Italian football club is said to be making certain changes in its roster ahead of the 2021-22 Serie A season. Though not really considered as a fringe player, Rafael Leao is among the several names being linked to a move away from San Siro.