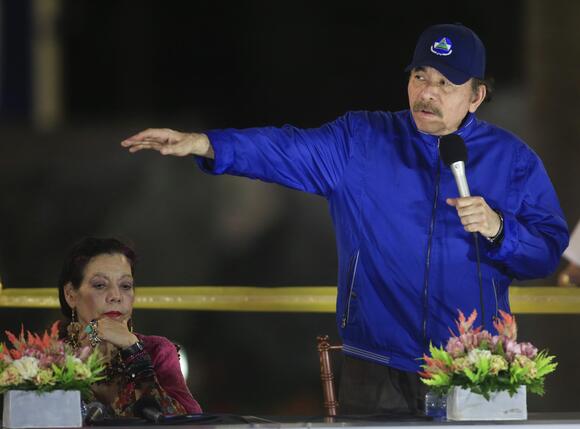 MANAGUA, Nicaragua (AP) — International criticism of Nicaragua’s government grew on Tuesday after another night of arrests in Managua. Fifty-nine countries at the United Nations Human Rights Council signed onto a statement expressing concern over arbitrary arrests and the restriction of fundamental rights.

“The government must ensure the protection of human rights and bring to account those responsible,” the statement said.

The organization called on the United Nations Security Council to invoke Article 99 of its charter “to raise this issue in the U.N. Security Council and present it as a growing crisis involving grave human rights abuses, which could undermine stability in the region.”

Daniel Ortega is seeking a fourth consecutive term as president and has been systematically clearing his path of potential challengers through arrests for alleged crimes against the state. The government had already significantly reduced the public space for opposition to maneuver through repressive laws and intimidation.

“High-profile arrests and other serious human rights violations against critics appear to be part of a broader strategy to eliminate political competition, stifle dissent, and pave the way for President Daniel Ortega’s re-election to a fourth consecutive term,” Human Rights Watch said.

There was no mention of Aleman or his whereabouts. The police statement said she would remain under guard while the allegations against her were investigated.

Also Monday, sports journalist Miguel Mendoza was arrested and journalist Carlos Fernando Chamorro, son of former President Violeta Barrios de Chamorro, said via Twitter that police had raided his home. He demanded they respect the well-being of his sister-in-law and others with her.

“They will not be able to silence journalism,” he wrote. Police raided the offices of his online news outlet Confidencial in May and the government seized the outlet’s old offices in December 2018.

Earlier, Nicaraguan writer and former Vice President Sergio Ramírez said there was no chance of free and fair elections in Nicaragua and that the opposition should refuse to participate in voting that would only legitimize Ortega’s victory.

Last week, most members of the Permanent Council of the Organization of American States condemned the Nicaraguan government’s actions and called for the immediate release of political prisoners. On Monday, Argentina and Mexico, two countries who abstained from the vote, recalled their ambassadors from Nicaragua for consultation over the developments.

The U.S. Treasury Department this month imposed sanctions on Ortega’s daughter and a top army official, as well as several others close to the president.

Nicaragua Foreign Affairs Minister Denis Moncada said in an interview with Venezuelan television that Nicaragua was no one’s colony and would not accept foreign interference. He said the people arrested in recent days were not presidential candidates, but rather “leaders of nongovernmental organizations that receive financing from the United States and European Union and intend to destabilize the country.”

“The gravity and intensification of the Ortega government’s brutal crackdown on critics and members of the opposition in recent weeks requires a redoubling of international pressure,” said José Miguel Vivanco, Americas director at Human Rights Watch.

The organization’s report noted that more than 108,000 Nicaraguans have fled the country since street protests began in April 2018 and were violently put down by the government. The Inter-American Commission on Human Rights found that 328 people were killed and some 2,000 wounded. Ortega has maintained those protests were a foreign-backed coup attempt.

Most of the arrests in recent weeks have been related to allegations that opposition figures accepted foreign financing for activities against the government.

Even before the latest crackdown, more than 100 political prisoners were already jailed in Nicaragua, the report said, documenting three cases of women who suffered assault and sexual aggression during their imprisonment.

In developing the report, Human Rights Watch interviewed 53 people in Nicaragua, including 46 activists, lawyers, journalists, human rights defenders and opposition figures who were victims of harassment of arbitrary detention. It said the government had not responded to its request for information on those cases.

Government targets frequently report police vehicles parked outside their homes that prevent them from leaving.

“There is virtually no chance Nicaraguans can exercise their fundamental rights to freedom of expression, assembly, and association, nor to vote and run for public office, if they are seen as opposing the ruling party,” Vivanco said. “Top UN officials and UN member countries that care about human rights have an opportunity to prevent a regional crisis by pressuring Ortega to end his repression now. They should seize it.”

BANGKOK — (AP) — Journalists in Myanmar face extreme peril as the military-controlled government cracks down on independent reporting, human rights and media advocates say. The government installed by the military in a Feb. 1 takeover has criminalized many aspects of reporting and arrested dozens of journalists, driving many into...

MANAGUA, Nicaragua — (AP) — Police in Nicaragua arrested on Tuesday academic José Antonio Peraza, the leader of the opposition alliance White and Blue National Unity. Peraza, a political science professor, was the 22nd opposition leader arrested, in addition to seven potential presidential candidates detained in a crackdown that started two months ago. Almost all were detained under broad accusations of treason.

In Election Year, Nicaragua’s Media Are Being Scared into Silence

In an election year, the investigation of a potential presidential candidate is a big story. But journalists, including some covering the house arrest of Nicaraguan journalist Cristiana Chamorro, have found themselves being questioned by authorities. Since May 25, at least 21 journalists have been summoned by the Nicaraguan prosecution office and...

Nicaraguan President Daniel Ortega has been arresting his political opponents who are disappearing into prisons. Two of their wives are appealing to the U.S. to help. Jackie Northam is NPR's International Affairs Correspondent. She is a veteran journalist who has spent three decades reporting on conflict, politics, and life across the globe - from the mountains of Afghanistan and the desert sands of Saudi Arabia, to the gritty prison camp at Guantanamo Bay and the pristine beauty of the Arctic.

MANAGUA, Nicaragua — (AP) — The Nicaraguan government organized rallies and festivities Monday to mark the anniversary of the July 19, 1979, revolution that overthrew dictator Anastasio Somoza. But with most opposition leaders jailed, many Nicaraguans say President Daniel Ortega is acting much like Somoza did 42 years ago. Several...

And yet we signed: Behind the letter to the president of Nicaragua

The stirring strains of “Nicaragua, Nicaraguita” played over the loudspeakers as thousands poured into the Plaza of the Revolution on July 19, 1983. Young people with raised fists and red-and-black bandannas, peasants in crisp white guayaberas and wide-brimmed straw hats, women in military uniforms rifles on their shoulders. They cheered when President Daniel Ortega spoke about the literacy campaign, the free health clinics, the new agricultural cooperatives on land seized from Somoza’s cohort of oligarchs.

Rights Groups Call on Morocco to Not Extradite Uyghur Activist

Rights groups are urging Morocco not to extradite to China a Uyghur activist who was arrested after arriving on a flight from Turkey. The nongovernmental group Safeguard Defenders said Yidiresi Aishan was taken into custody in response to an Interpol Red Notice issued at China's request. The charges against Aishan...

Krish O'Mara Vignarajah is the president and chief executive of the Lutheran Immigration and Refugee Service. She previously served as a senior adviser at the State Department and as a policy director in the Obama administration. The views expressed here are her own. Read more opinion at CNN. (CNN) —...

An Iranian athlete left his country after being told to lose on purpose, won silver at the Olympics for Mongolia, and dedicated the medal to Israel

Saeid Mollaei is from Iran but is representing Mongolia at the Tokyo Olympics. After winning silver in judo, he dedicated his medal to Israel.

Sen. Ted. Cruz was met with silence during a congressional hearing when he grilled a panel of cybersecurity officials on why China was not sanctioned after the attack on Microsoft and other U.S. companies. "Let me ask anyone on the panel," Cruz said Tuesday during the hearing, directing his question...

From the all-hosted-by-a-country-that-really-knows-how-to-host-a-war-or-two dept. I don't think anyone foresaw the immense amount of fallout that would result from the revelation that Israeli malware purveyor NSO Group's Pegasus software is being used to target phones belonging to journalists, activists, religious leaders, and high-ranking government officials. After all, some of this was already common knowledge, thanks to investigations by Citizen Lab and others delving into the inner workings of this powerful spyware.

HONG KONG (AP) — A lawyer for the first person convicted under Hong Kong’s national security law asked Thursday for no more than 10 years in prison instead of the possible life sentence faced by the former restaurant waiter in a closely watched case as China tries to crush a pro-democracy movement.

China sends new ambassador to US amid strained ties

BEIJING (AP) — China’s new ambassador to the United States outlined the challenges the two countries face in what has become an increasingly competitive and contentious relationship, while refraining from any criticism in short remarks after arriving to take up his new post. “China and the United States are entering...

HANOI, Vietnam (AP) — U.S. Defense Secretary Lloyd Austin met his Vietnamese counterpart on Thursday to deepen cooperation in security and pandemic recovery, after Washington vowed support for Southeast Asian nations embroiled in territorial rifts with China. Vietnam and the Philippines, Austin’s next stop, are among China’s fiercest opponents in...

KUALA LUMPUR, Malaysia (AP) — Malaysia’s king on Thursday rebuked Prime Minister Muhyiddin Yassin’s government for misleading Parliament over the status of coronavirus emergency measures, in a blow to the embattled leader who is struggling to stave off challenges to his leadership. Muhyiddin obtained royal consent to declare the emergency...

Burundi, in reversal, says it will accept COVID-19 vaccines

NAIROBI, Kenya (AP) — Burundi’s government now says it will accept COVID-19 vaccines, becoming one of the last countries in the world to embrace them. But the health ministry says it will not take responsibility for any side effects they might cause. Health Minister Thaddee Ndikumana on Wednesday said the...