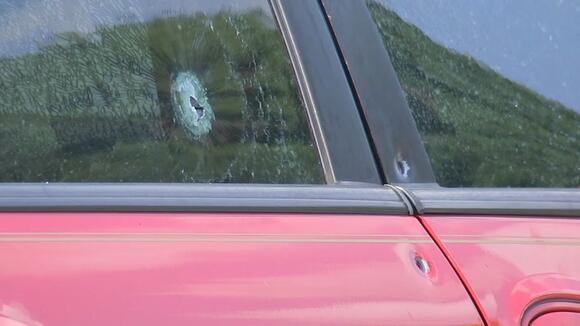 One person has died and seven others are injured after gunfire rang out across Philadelphia Monday night. In one shooting, police say two teens were shot while waiting at a red light inside a car. Around 7 p.m., police say two men were shot near Broad Street and Lehigh Avenue in North Philadelphia. Officers found a 46-year-old man suffering from multiple gunshot wounds. He was rushed to an area hospital where he later died. Action News has learned that a SEPTA bus was hit by a stray bullet as the shots rang out, but no one on the bus was injured. Police say a second victim, a man in his 40s, was hospitalized after being shot in the abdomen. He is currently listed in critical condition.

Shot while at red light

Around 5:30 p.m., police say a gunman in another vehicle opened fire on two teens who were inside a red Chevy Impala while at a red light. It happened near the 5400 block of North 5th Street in the city's Olney section. A 19-year-old male was shot three times and the 15-year-old male was shot once. Both victims are listed in stable condition.

Just before 6 p.m., police say a shooting investigation was underway at the Belmont Plateau in Fairmount Park. Officers found a 20-year-old man shot multiple times near the 2000 block of Belmont Mansion Drive. The victim was rushed to an area hospital where he's currently listed in stable condition. Philadelphia police are also investigating two separate shootings that left three people injured. A woman was shot around 6:11 p.m. on the 2900 block of Ruth Street. Around 7:13 p.m., a man and woman were shot near 18th Street and Oxford. All three victims are expected to survive. No arrests have been made in connection with these shootings. Anyone with any information is asked to call police at 215-686-TIPS.

Police search for suspect wanted in shooting in North Philadelphia

Police are asking for help identifying a gunman who opened fire on a 30-year-old man in North Philadelphia.

Philadelphia police are investigating a shooting at the Courtyard by Marriott in the city's Wynnefield Heights section on Monday night.

A suspect who allegedly fired a weapon into a crowd of people was shot and killed by two undercover Philadelphia police officers on Thursday night, Action News has learned.

A man was killed Tuesday morning in a construction site accident in Philadelphia's Hunting Park section.

New video shows the moments leading up to a fatal shooting outside of Pat's King of Steaks in South Philadelphia last week.

Philadelphia police say four women were stabbed and another was hit with a baseball bat during a fight in the city's Olney section on Monday night.

Philadelphia police are investigating a shooting at the Courtyard by Marriott in the city's Wynnefield Heights section on Monday night.

Philadelphia police announced an arrest made in the killing of a 13-year-old back in April in the city's Frankford section.

One person was killed and at least three others were injured in separate shootings in Wilmington, Delaware.

Shortage of 911 dispatchers causes concerns in Philadelphia: 'Nobody answers the phone'

VIOLENT NIGHT: Police in Delaware are investigating three shooting incidents on Monday night that left five people dead and three others injured, including a young child.

A woman has died following a triple shooting near Temple University's main campus in North Philadelphia.

Funeral arrangements announced for Montco firefighter killed on I-76

HONORING THE FALLEN: A public viewing will be held on Saturday in the Lower Merion High School auditorium in honor of fallen firefighter Thomas Royds.

A teenager who had just finished playing a basketball game was shot while hanging with friends on the court, police say.

A group of police officers in South Jersey had to stand guard outside the home of an accused child abuser on Tuesday.

Vigil held for man shot, killed outside of Pat's King of Steaks in South Philly

A vigil was held on Sunday night for the man who was shot and killed outside of Pat's King of Steaks in Philadelphia last week.

Philadelphia officials announced the conviction and sentencing in the murder of Michelle "Tameka" Washington, a 40-year-old transgender community advocate.

Woman admits to drinking alcohol before I-76 crash that killed firefighter: Affidavit

Authorities say a South Jersey woman admitted to drinking mixed alcoholic beverages before a crash that killed a Montgomery County firefighter, according to an arrest affidavit.