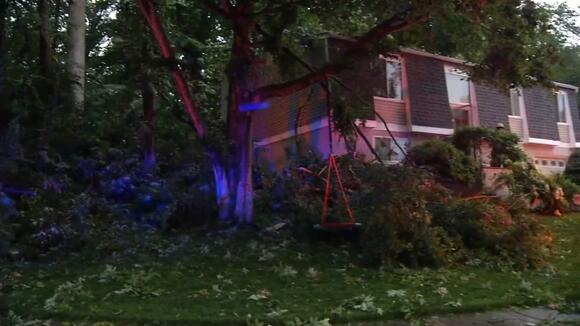 A woman was rescued after a tree crashed into her home during severe weather on Monday night in Newark, Delaware. It happened around 7:14 p.m. on the unit block of Squirrel Lane. The family - a grandmother, a couple and their two children, ages 4 and 1 - were inside of the home at the time. According to Deputy Fire Chief Jeff Sands with the Aetna Hose Hook & Ladder Company, rescue crews found a woman in her mid-60s trapped on the second floor of the home after the tree caused a partial collapse. Liabeth Yohannes and her two children were standing in the kitchen area when the partial collapse occurred. The children were able to escape uninjured on the first floor. "My daughter was in the perfect spot where everything fell right around her like a pyramid, and I was able to pull her out. My son was OK, he had minor scratches on his back," she said. Crews were able to stabilize the collapse and safely pull the woman out. She is currently hospitalized in stable condition. "First responders did an amazing job rescuing my mom," Yohannes said. Sands called the damage to the home "pretty significant."

Firefighter killed, other first responders injured in crash on I-76 in Lower Merion

One firefighter was killed and other first responders were injured early Saturday in a serious crash on Interstate 76 in Lower Merion Township.

First responders injured in crash on Interstate 76; all lanes reopen in Lower Merion

SEPTA confirms passengers have been injured after a bus collided with a pickup truck in North Philadelphia.

A 29-year-old man is in critical condition following a shooting in Wilmington.

CHARGED WITH MURDER: Police say the suspect turned himself in a short time after the killing at the iconic cheesesteak shop.

A woman has died after a crash in the Juniata Park section of Philadelphia.

The Bensalem Police Department is searching for a suspect who tried to break open a payment machine at a car wash Wednesday with a blowtorch.

Philadelphia police are investigating a shooting and crash that may be connected.

"I'm the guy driving the ambulance," the gunman said over the radio as he fled from Houston officers and held an EMT and patient captive.

Philadelphia police announce an arrest made in the killing of a 13-year-old back in April in the city's Frankford section.

A suspect who allegedly fired a weapon into a crowd of people was shot and killed by two undercover Philadelphia police officers on Thursday night, Action News has learned.

Police say a man shot his friend in the face inside his Southwest Philadelphia home.

A man was shot and killed while in line at Pat's King of Steaks, the landmark cheesesteak shop in South Philadelphia, police say.

HIDDEN CAMERA: Officers said they were able to track the suspect down after he asked a store employee where his pen went.

A suspected hit-and-run driver accused of killing a pedestrian in Philadelphia's Port Richmond last month turned himself in to police.

WATCH: Chopper 6 was overhead after a small plane skidded off the runway at the Reading Regional Airport.

Officer-involved shooting under investigation in Philadelphia

Philadelphia police are investigating an officer-involved shooting on Thursday night.