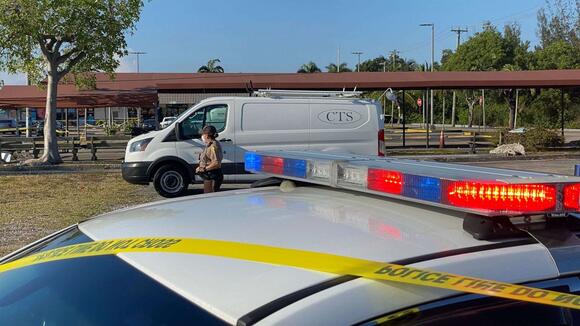 Three people are dead, including a veteran police officer, following a shooting in a Denver suburb on Monday afternoon, authorities said.

The incident unfolded at around 1:15 p.m. local time in Olde Town Arvada, the downtown district of Arvada, Colorado, about 10 miles northwest of the state's capital. The Arvada Police Department said one of its officers, identified as Gordon Beesley, was responding to a 911 call about "suspicious" activity when he was shot and killed. Then more 911 calls came in at around 1:30 p.m. about shots fired and a fallen officer, according to police.

Law enforcement sources told ABC News that the officer was hit by gunfire while confronting a suspect, but it was unclear what caused the confrontation.

A good Samaritan, identified as John Hurley, 40, of Golden, was also shot and taken to a local hospital, where they later died, police said. Meanwhile, the suspected gunman was shot and killed at the scene, according to police.

Police identified the gunman Tuesday night as Ronald Troyke, 59, of Arvada, and said his death was caused by multiple gunshot wounds.

Authorities said there was no question Beesley was targeted because he was a police officer.

"I can tell you the Gordon was targeted because he was wearing an Arvada police uniform, and a badge," Police Chief Link Strate said at a press conference Tuesday evening. "Officer Beasley was ambushed by a person who expressed hatred of police officers.”

Authorities are not searching for anyone else in connection with the deadly shooting and there is no threat to the public, police said. A shelter-in-place order that was in effect for the immediate area where the incident happened has been lifted.

Beesley, the slain officer, was a 19-year veteran with the Arvada Police Department and was also a resource officer at the city's Oberon Middle School. He was working patrol while school was out for the summer, according to police.

The young man had been on life support since being shot.

The U.S. Border Patrol says one of its agents and another driver were killed Saturday in a head-on crash in southern Arizona

Woman and her dog are fatally stabbed in Atlanta park, FBI investigating

Police are investigating the gruesome stabbing death of Katherine Janness and her dog Bowie early Wednesday in Piedmont Park.